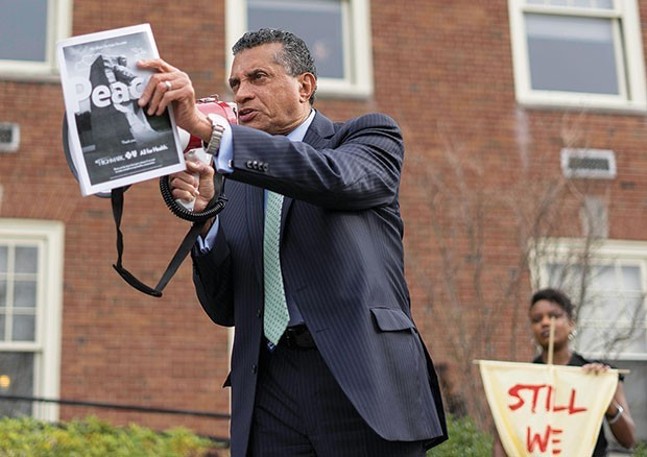 CP photo by Aaron Warnick
Summit Against Racism organizer Tim Stevens at last year's event
“There’s no honor is racism.” “Justice is what love looks like in public.” “Support women in prison.”

These banners were among those that lined the Pittsburgh Theological Seminary all day Saturday at the 20th Summit Against Racism. Under the title, “The Struggle Continues: Healing Trauma, Building Community and Inspiring Action,” the Jan. 20 summit urged participants to engage in tough conversations and figure out what’s next in the struggle to overcome racism in America.

This year, 750 attended the summit, a multicultural initiative of the Black & White Reunion and hosted by the Metro-Urban Institute. Both organizations were formed to examine issues around race. Guests traveled from as far as Philadelphia to attend some of the more than 40 workshops designed to open dialogues on understanding trauma and the next steps in creating safe spaces.

In the past few years, the summit has grown exponentially. Last year, the summit included about 700 attendees, even though it coincided with the Women’s March on Pittsburgh and the Our Feminism Must Be Intersectional March/Rally. This year's opening ceremony was overflowing with many participants leaning against the back wall or sitting on the floor.

Authors Damon Young and Deesha Philyaw closed the day discussing “How to not be a racist.” The pair went through everyday microaggressions and how to take the time to listen. Young offered a parting piece of advice: Learn to be a guest.

“Manifest destiny shouldn’t be your personal adage forever,” Young laughed. “You don’t walk somewhere and say, ‘Oh, this is mine.’”

Young detailed that when entering a space that is not yours, the focus needs to be on allowing the owner to feel comfortable, not on your own comfort level.

Vivienne Selia, a first-time attendee and retired social worker, attended three workshops. Her favorite was the last of the day: “Transformative Intergroup Dialogue,” which discussed developing a consciousness through learning how to listen.

Selia was inspired by the panels and said that although progress will take a harder push to accomplish, it will get done.

”It’s easy to get discouraged because the wheels of everything seem to move slowly,” Selia said. “When people can talk and listen in an honest and safe environment, they’re willing to take risks.”

Others at the event, including Qaadir Anderson, a presenter and first-time attendee, were left wanting tangible change.

“I don’t know if we really reached the people we needed to reach or should reach,” Anderson said. “I’d like to see what progress has been made after 20 years.”