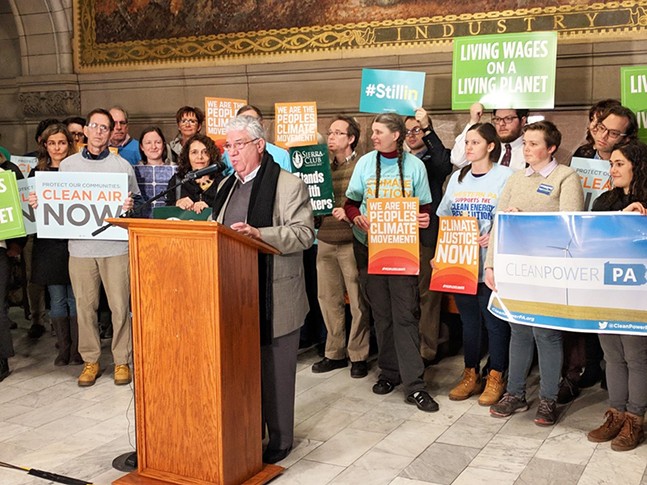 CP Photo by Rebecca Addison
Sen. Wayne Fontana at today's press conference
When President Donald Trump evoked Pittsburgh's name last year, as part of his rationale for withdrawing from the Paris Agreement on climate change, many Pittsburghers weren't having it. In a tweet that has since gone viral, Mayor Bill Peduto reaffirmed Pittsburgh's commitment to the agreement, and environmental activists and organizations redoubled their efforts.

Months later, that fervor hasn't died down. At a press conference at the Allegheny County Courthouse earlier today, Pennsylvania legislators voiced their support for the ideals laid out in the Paris Agreement. To back it up, they've proposed legislation directing the Pennsylvania Department of Environmental Protection to reduce statewide greenhouse-gas emissions by 30 percent by 2025.

"President Trump stepped backward with the Paris Accord on climate change, and now it's time for Pennsylvania to step to the forefront and become a leader," said Pa. Sen. Jay Costa (D-Allegheny), one of the bill's sponsors. "We have a responsibility to act. Today, Pennsylvania is fifth among U.S. states in terms of population, but we're third in carbon pollution."

The goals laid out in the bill are aligned with the pollution-reduction goals of the federal Clean Power Plan and the Paris Agreement. Pa. Sen. Wayne Fontana (D-Allegheny) and Pa. Sen. Anthony Williams (D-Philadelphia) are also co-sponsors on the legislation.

"The principles set forth in this proposal can only help to strengthen our city, our region and our commonwealth," said Fontana. "Climate change is real, and turning our backs on environmental progress is a nonstarter in my opinion."

Among those in attendance at the press conference were Sierra Club Pennsylvania, Sustainable Pittsburgh and Environmental Entrepreneurs (E2).These organizations say reducing carbon emissions isn't just good for the environment; it's good for the economy.

According to the Clean Jobs Pennsylvania report, presented by E2 and Keystone Energy Efficiency Alliance, clean-energy jobs are growing at 6 percent  annually. There are currently approximately 70,000 clean-energy jobs in the state.