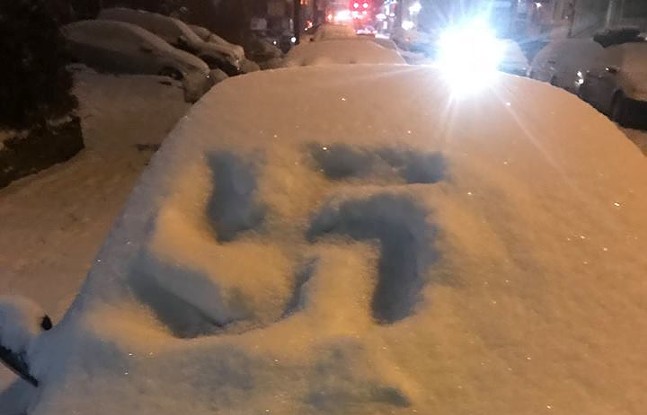 But as he continued to walk down Meyran, he spotted about 15-20 more swastikas. All were drawn into the snow on car windshields, on both sides of the avenue. That was when the student knew he had to do more than just brush off the swastikas. So, he took pictures of the swastikas and posted them on Facebook, along with a post saying that this behavior needs to stop and denouncing anyone for promoting Nazism and white supremacy. The post was shared more than 620 times. The student requested to remain anonymous, saying he fears retaliation from making the incident public.

“Someone took the time to stand there to make them perfectly visible,” said the student in an interview with Pittsburgh City Paper a week after the event. “I think it was somebody who wants to promote hate. I am Jewish and am I gay, that symbol triggers me.”


The Pitt student rejects any idea that this incident is just a joke. He says that over the years, he has been mocked and insulted for who he is. He believes the hate the swastika stands for shouldn’t be ignored.

“Just a few years ago, people were calling me faggot, and saying I should go into the oven,” said the student. “People hate people for no reason. Those symbols support death and murder.”

Josh Sayles, of the Jewish Federation of Pittsburgh, called the incident “disgusting” and agrees with the Pitt student that there is nothing funny about it. “It's not a joke; it is never a joke,” says Sayles. “It could be hate, hopefully it is not and it is just ignorance. Sometimes people don't understand the meaning behind the swastika.”

Photo courtesy of Facebook
Another swastika on a car on Meyran Avenue in Oakland
Sayles added that issues of hate targeting the Jewish community and other minority groups have been on the rise recently. Last year, in Pittsburgh alone, a white supremacist re-emerged and spread his hate-filled rhetoric; a local comedian made a black-face video to insult a local African-American comedian; and a park bench was vandalized with a racial epithet in reference to Steelers coach, Mike Tomlin, who is black. The Federal Bureau of Investigations released a report last year saying that hate crimes increased by 300 in 2016, up to 6,100.

The Pitt student says this swastika event is not a one-off incident. He encouraged people to speak out against these events, and stand up to hate.

“I don’t think it is an isolated event,” says the student. “It plays to the tune of America today; we are divided. If I would have seen someone drawing a swastika in the snow, I would have freaked out and told them to stop. You have to stick up for what you believe in.”

Sayles says he encourages people to report these events to the local authorities and to contact the Jewish Federation of Greater Pittsburgh, which tracks hate and anti-Semitic incidents. “This is the not the first time, nor will it be the last time, that someone will try to intimidate Jewish people and other groups of people,” says Sayles. “If you see something, say something.”

This report is part of a CP's ongoing partnership with ProPublica’s Documenting Hate project.

Editor's note: This post originally stated the name of the source who took pictures of the swastikas. That person's name has been removed, because they told CP that they feared retaliation in response to the story, after the story was initially published. 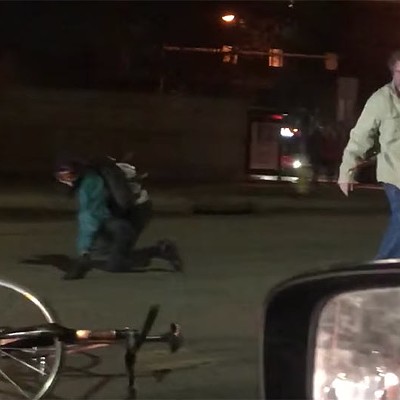