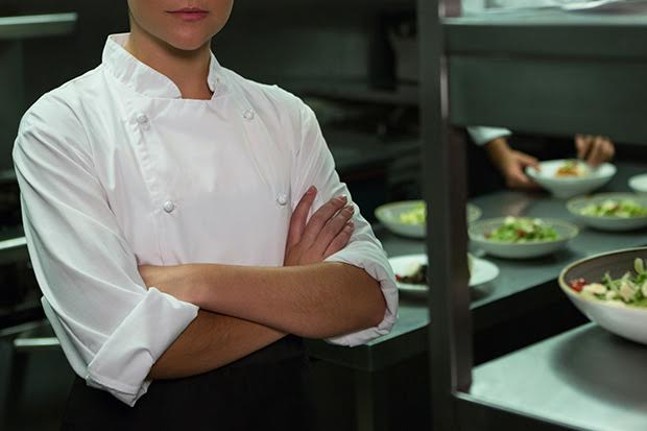 Last week, the San Francisco Chronicle broke the restaurant industry’s most recent sexual-harassment allegations, this time against chef Charlie Hallowell of Pizzaiolo, Boot & Shoe Service and Penrose. Up went the pieces on Eater, Grub Street and others that chronicled the abuse, the chef’s resulting “step back from the restaurants daily operations,” his statement/apology and the predictable mention of how this is happening a lot more frequently lately.

And of course, it is. The last three months have brought a wave of public awareness of the abuses that happen regularly inside the restaurant industry. Thrust into the spotlight by the #MeToo movement, previously untouchable heavy hitters like Ken Friedman, of The Spotted Pig; Todd English, of the Plaza Hotel; Mario Batali, of Eataly; and John Besh, of The Besh Restaurant Group, among many others, have felt the flames of outrage lick their heels.

Pete Wells, restaurant critic at The New York Times, entered the ring with his Jan. 2 piece, “Scandals Keep Breaking, But Restaurateurs Have Yet to Own Up,” citing the lack of real consequences for the accused other than being damned in the court of public opinion. Even that, he points out, doesn’t seem to be having much of an effect on businesses like The Spotted Pig, where “there was still a two-hour wait for a table,” just downstairs from the private dining room many employees reportedly called “the rape room.” The allegations from staff and former staff of all these men detail horrors so alike in tenor that it numbs the mind to read report after report; there is a sinking feeling in one’s gut that this darkness is widespread and, worse yet, homologous.

This is a moment in which people with less power are feeling able to come forward against their more powerful and likely more affluent abusers. It’s so needed, and it needs to be hammered into our heads and headlines over and over, until we collectively come up with a solution. But in doing so, we also need to honor the experiences of these victims and the risks they take by coming forward.

We can start by ceasing to print the disingenuous apologies and responses to inquiry that these abusers dash off post-haste with a legal team after they’ve been caught; many of the accusations date back 10 years or more. It’s hard for even the most optimistic of us to believe that days after accusations are made, that anyone who has allegedly been harassing employees for years is truly ready to take responsibility for their actions.

In many cases, these same abusers have ignored repeated confrontations about their behavior. They are not sorry. They do not “believe in this reckoning and stand behind it,” as Hallowell penned in an open letter to his employees. They are sorry they’ve been caught. In printing these statements in a story about abuses centered around victims, and not as separate releases (if you must print them), victims are forced to watch their accusers be given a voice that seeks immediate absolution.

Dana Goodyear’s piece, “Can Hollywood Change Its Ways?” in Jan. 8 The New Yorker, reflected on the recent effects of the #MeToo movement in Hollywood’s sphere, including this observation from an interviewee: “In the past, men who got caught used a magic spell: 'I am an alcoholic/sex addict/ and am seeking treatment,’ says Arnold Gilberg, a prominent psychiatrist who has treated many high-profile people in Hollywood for sex addiction, sees the display of compunction as evasive. He told me, ‘They get nailed and go into facilities to avoid the penalty for their behavior.’” Goodyear goes on to posit that this “magic spell no longer works.”

However, consequences in the form of criminal charges and, in the case of restaurants, divestment, remain to be seen. Products are pulled from shelves (in the case of Batali), and the public is told that chefs are no longer “actively” involved or that they’ve “stepped away,” but it’s hard to tell if this will actually have any monetary effect on the accused abusers. Are lawsuits in progress? Will these men ultimately receive anything other than a slap on the wrist while we all gleefully suck down their pasta or sit at their bars thinking that our self-righteous griping is enough to change the culture of sexual harassment in our world? At least hit them in their wallets. That would be a start.

Enhance your holiday feast with entrees, desserts, and more from Pittsburgh-area restaurants