The third edition of this forum for "smart talk about stuff that matters" hits Downtown venues Feb. 24-March 4. The line-up, presented by the Pittsburgh Cultural Trust and the Humanities Center at Carnegie Mellon University, was announced at a press conference this morning.

The theme is Continuum: Past, Present, Future, with a focus on how ideas persist and reappear over time. 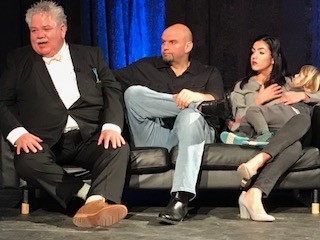 CP Photo by Bill O'Driscoll
From left: Rick Sebak, John Fetterman and Gisele Fetterman (with kid)
The five featured events include visits from Guy Raz, host of popular NPR podcasts including the TED Radio Hour and How I Built This; PostSecret: The Show; and feminist documentarians Allison Rapson and Kassidy Brown.

Other guest of these on-stage conversations, complete with audience Q&A, include such local luminaries as filmmaker Rick Sebak; X-Men and Hip Hop Family Tree cartoonist Ed Piskor; and high-profile couple John Fetterman and Gisele Fetterman, the former the mayor of Braddock and a candidate for lieutenant governor, the latter a social activist. And local artist and performer Vanessa German interviews Edda Fields-Black, historian and the librettist for a forthcoming symphonic work honoring the enslaved Africans who worked the rice fields of the South.


Other guest authors and experts at 14 "core conversations" on March 3 and 4 cover topics including: the removal of civic monuments; autism (by Neurotribes author Steve Silberman; sex on college campuses (Unwanted Advances author Laura Kipnis); political conservatism (with Corey Robin, author of the controversial The Reactionary Mind, which some call "the book that predicted Trump"). Also visiting is Lou Reed biographer Anthony DeCurtis and professor Alex John London, who discusses "Ethics and AI Systems." 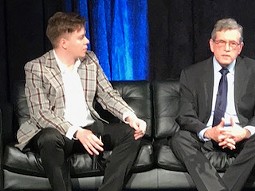 The festival premiered in 2015 and returned in 2017. Co-organizer Randal Miller said attendance in 2017 was 2,000 — more than triple the attendance at the inaugural festival. Co-organizer David Shumway, director of the Humanities Center at Carnegie Mellon University, said it might now be the second biggest humanities festival in the country, after Chicago's (the one that inspired him to create Pittsburgh's).

The press conference, held Downtown at the Trust Arts Education Center, included visits from Sebak and the Fettermans.

The festival's wide range of topics was summed up by Sebak, who said, "Everything human is the humanities." Gisele Fetterman added, "Everyone you meet knows something you don't."

The festival also include a Public Open Call, for which a jury panel will consider pitches from new voices, one of whom will be selected to participate.

A full schedule and ticket info are here.