Our 'Best Nine' Instagram photos of 2017
Christmas in Pittsburgh is pretty photogenic, isn't it?

I highlighted some of 2017's most liked photos of local Instagram accounts a few weeks ago when this year's 'Best Nine' photos first started popping up in everyone's feeds. In those two short weeks, though, three of our current photo intern Jake Mysliwczyk's holiday images made their way into our top spots of the entire year.

We've included our final tally of this year's nine most liked Instagram photos below, including descriptions and links to stories when applicable. We also reached a milestone in the past week: 25,000 followers! If you're not already following along, give us a follow at Instagram.com/pghcitypaper.

No. 9
Pittsburgh protesters came out in force against the Westboro Baptist Church when they visited the city in October. Photographer Maranie Staab captured the scene as protesters carried signs through Oakland.

No. 8
We regram photographers taken by our readers who use the hashtag #CPReaderArt in their captions several times a week. Instagrammer @techni_kolor took the eighth spot in our list with this pretty November photo of the Monongahela Incline.

No. 7
Pittsburgh Penguins owner Mario Lemieux greeted fans during the team's second consecutive Stanley Cup Victory Parade in Downtown Pittsburgh in June. You can check out more of our photos from the parade by summer photo intern Jordan Miller here.

No. 6
On the one-year anniversary of Donald Trump's election in November, we joined other alt-weeklies across the country for a cover story package calling for his impeachment. This cover image, illustrated by Jeff Drew, appeared on multiple papers, including Pittsburgh City Paper. 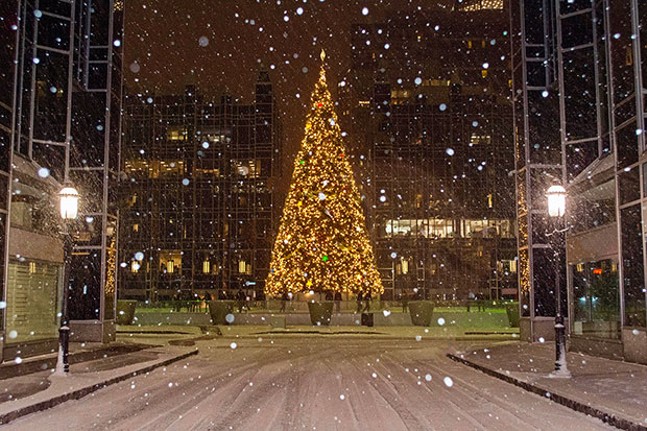 No. 5
Intern Jake Mysliwczyk captured this snowy scene of the tree and MassMutual Pittsburgh Ice Rink at PPG Place in Downtown Pittsburgh. We posted it on Christmas Day.

No. 4
This is our second #CPReaderArt regram to make it into our top spots. It was posted by @purrlsofwisdom and captures street art of Pittsburgh's beloved Mr. Rogers.

No. 3
Summer photo intern Krista Johnson took this great shot of the rainbow crosswalks on Ellsworth Avenue in Shadyside during Pride Month back in June. For more LGBTQ images and rainbows, don't miss our photos from Pittsburgh's annual Pride Parade here.

No. 2
Shitter's full! Jake Mysliwczyk captured photos of a house in Bethel Park with decorations replicating the famous scene from holiday classic National Lampoon's Christmas Vacation. See more of his photos here, including a close-up of Snots the dog.

No. 1
And our No. 1 photo of the year — and all time — is this beautiful shot of the Horne's Christmas tree glowing under falling snow in Downtown Pittsburgh, taken by Jake Mysliwczyk in December, coming in with over 1,800 likes.