City Paper has been covering the city’s affordable-housing crisis extensively, and wanted to provide a timeline of how the city went from preliminary talks on housing, to 200 working-class residents getting eviction notices, to a fund to help tackle affordable-housing shortages.

February 2015 - Pittsburgh creates an Affordable Housing Task Force. The legislation was introduced by Councilor Lavelle. The task force was assigned to find recommendations on ways the city could tackle its shortage of affordable housing.

April 2015 - CP reporter Rebecca Addison discovers that an affordable-housing program that normally received praise, the Section 8 voucher program, wasn’t working as intended. A year after 5,000 Section 8 vouchers were doled out, only about 7 percent of applicants have been housed using the voucher.

July 2015 - LG Realty, run by the Gumberg family, announces the evictions of some 200 units at Penn Plaza, in East Liberty. The building was one of the last large apartment complexes in the East End that offered non-subsidized affordable units. Pittsburgh Mayor Bill Peduto and other city leaders work to find a way to keep the Penn Plaza tenants in the neighborhood, but rising housing costs to East Liberty meant there were few affordable units left nearby. 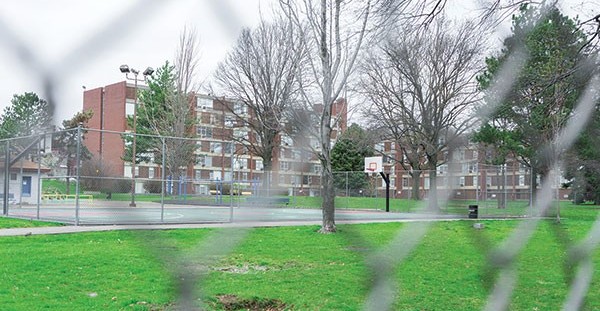 CP photo by Aaron Warnick
View of Penn Plaza from Enright Park in East Liberty
September 2015 - An agreement is reached between LG Realty, the city of Pittsburgh and the Penn Plaza tenants which would allow LG to move forward with development in exchange for contributions to future affordable housing and move-out costs for the Penn Plaza tenants. But the agreement couldn’t shield the fact that most Penn Plaza residents would still have to leave East Liberty, with its good access to jobs, public transit and amenities.

December 2016 - With legislation sponsored from councilors Lavelle and Ricky Burgess (D-North Point Breeze), Pittsburgh creates an affordable-housing fund called the Housing Opportunity Fund. The fund is intended to raise $10 million a year to provide gap funds on affordable-housing projects and money to help low-income people purchase and remodel homes. No funding source for the HOF was initially identified.

May 2016 - As part of the agreement between the city, LG Realty and the Penn Plaza tenants, the city was set to forego Enright Park, a public park, to LG. Residents in East Liberty and neighboring Friendship cried foul, and eventually Pittsburgh Urban Redevelopment Authority blocked LG's acquisition of the small park.

January 2016 - Even as city council was taking steps to tackle affordable-housing issues, the city’s URA authorized an ice-rink development in Shadyside that would leave about $1 million less dollars dedicated to affordable housing in the East End. Peduto’s then chief of staff Kevin Acklin defended the decision, since $1 million “would only have funded a few additional units.” But experts note that the $1 million could have been used to incentivize other developers and could contribute up to 40 subsidized units.

April 2016 - Housing advocates ask city council to consider adopting an incentive-based, inclusionary-zoning policy to address the affordable-housing shortage. This means if a developer receives public subsidy or city assistance, like a zoning variance, then the developer is required to provide some affordable housing. The idea did not gain much traction.

June 2016 - Advocates grow impatient with council and its indecision on how to fund the Housing Opportunity Fund, so they gather petitions to put an initiative on the November 2016 ballot to raise the city’s Realty Transfer Tax from 4 percent to 5 percent. Advocates gather enough signatures for the ballot initiative, but were persuaded by Lavelle and others to let city council try to find the solution legislatively. 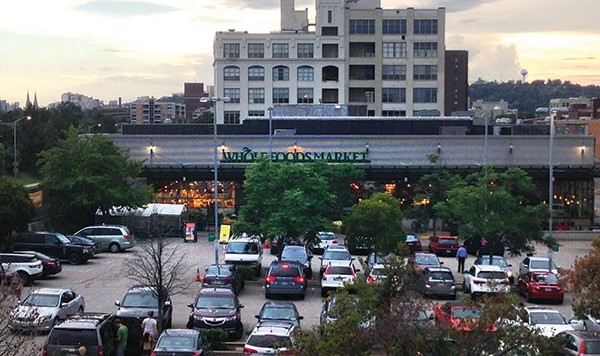 CP photo by Ryan Deto
Whole Foods Market in East Liberty
August 2016 - When it was revealed that grocery-store giant Whole Foods was the developer that would move into the former Penn Plaza site, Pittsburgh housing advocates call for a boycott of the company. Whole Foods eventually pulls out of the deal citing “community pressure.”

December 2016 - Larry Gumberg, principal at LG Realty, brings a group of East Liberty parishioners to lobby for LG on the Penn Plaza development, even though the parishioners appear to have little to no knowledge about Penn Plaza or how affordable-housing funding works. The planning commission eventually rejected LG’s proposal.

April 2017 - Housing advocates ask for the city to purchase the Penn Plaza property after LG’s first proposal was rejected by the planning commission. Acklin told the Pittsburgh Post-Gazette that the city initially tried to purchase Penn Plaza in 2015, but LG rejected the offer.

May 2017 - Advocates, policy experts, real-estate agents and city councilors can’t agree on how to fund the $10 million affordable-housing fund. Advocates and some city councilors want a 1 percent increase to realty-transfer tax, while real-estate agents say that money should be spent to
modernize the city's real-estate department to make city-owned properties accessible to low-income home buyers. Policy experts want a mix of both, and say funds can be generated by altering tax-abatement policies.

December 2017 - City council finally reaches a compromise to fill the $10 million affordable-housing fund, thanks to some negotiations led by Councilor Corey O'Connor (D-Squirrel Hill) and others. The realty-transfer tax will be raised .5 percent to 4.5 percent for next two years, supplemented by some funds found in city coffers. Then, in 2020 and moving forward, the transfer tax will be raised a full percent to 5 percent.