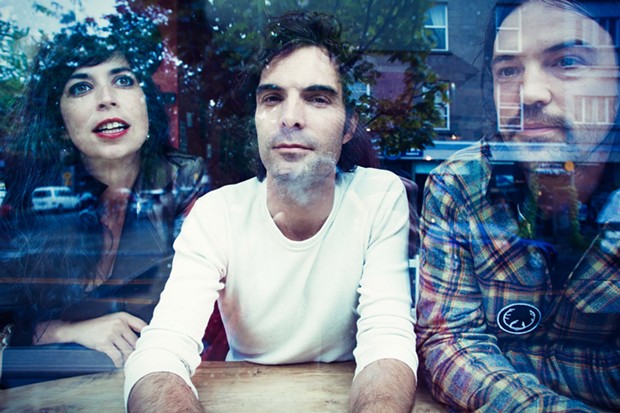 Photo courtesy of Brigitte Henry
The Barr Brothers
I fell in love with The Barr Brothers self-titled debut while driving back from a long weekend of cross country skiing in Thomas, W. Va. I’d been out on mountain trails during the day and frequenting the regionally legendary folk venue, The Purple Fiddle, by night. The Barr Brothers' lo-fi, neo-folk sound provided the perfect soundtrack. It’s a wintry sound and reminiscent of Bon Iver, who I also adored. When I listen to it now, I can still feel the sting on my cheeks of the cold and see the low light flitting across the snow out the car window. It’s fair to say that this band has fit into a deeply sentimental part of my brain and that I went into the show with some high expectations — especially since I also adore their sophomore release Sleeping Operator just as fervently.

The Barr Brothers is made up of vocalist and guitarist, Brad Barr, drummer Andrew Barr and harpist Sarah Pagé, with touring members Morgan Moore on bass and Brett Lanier on pedal steel. The latest album, Queens of the Breakers, dropped in October 2017 on Secret City Records and kicked off their latest tour, which came to the Rex Theater last week. This newest album seems to ring in a musical shift for the band towards heavier rock melodies with more significant blues influences.

Thematically, the songwriting still deals largely with emotional journeys and reflections on Barr’s experiences, although less gently. “Half Crazy,” one of the songs from the third album that got the most audience response, takes a harder approach to love than the heavy harmony and love-drunk romantic ballads fans have come to expect from previous output. “It Came to Me,” another new track, has a decidedly blues rock feel; for this Akron girl, it felt reminiscent of The Black Keys tracks of Rubber Factory, if somewhat lighter and more folk-influenced. Syncopated clapping, tambourine and soaring notes from bent strings cap off the vintage vibe.

Tracks transitioned effortlessly from one to the other, perhaps in an effort to create a consistent sonic landscape. This approach worked when playing material from their first two albums, but the more straightforward rock of their new stuff didn't lend itself to easy blending. While I appreciate the display of range in this musical sidestep, throughout the show, I missed the reliance on harmony and vocal blending that the band demonstrated so masterfully throughout their first two albums.

Maybe this change would have been better weathered if the performers had made more of an effort to engage their audience. It was disappointing to see a band live that played like they were in a recording studio, neglecting any small talk, band introduction or even greeting the audience before their first song. What the performance lacked in soul and audience connection, it made up for with musicianship and technical proficiency. The playing was technically tight throughout the show, with particularly solid performances from the rhythm section and the pedal steel player. Pedal steel is one of those instruments that has an incredibly distinctive sound that I think should be worked into music more often, not just country. In maybe the strongest moment of the show during a transition between songs, Moore and Brad Barr faced off and riffed sitar-like eastern influences on the bass and guitar complete with a background drone. A close second in raw talent was the lengthy and hauntingly clear high note Pagé let soar during “How the Heroine Dies.”

In the end, I think it’s fair to say that the band is moving forward musically and professionally, but to me, the success feels a bit hollow. I guess I’ll stick to the first two albums.

An interview with Eric Kimmel, author of Hershel and the Hanukkah Goblins