Final weekend for "The Humans" at the Public | Blogh

Stephen Karam's comedic family drama is built around a Thanksgiving dinner that feels ripped from this past November. 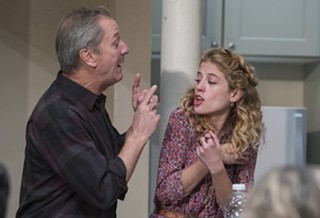 Photo courtesy of Michael Henninger
J. Tucker Smith and Valeri Mudek in "The Humans"
The parents and grandmother, from Scranton, are visiting the youngest daughter and her boyfriend in their Manhattan apartment, joined by the older daughter, who lives in Philly. There's Catholicism, regret, ribbing, "I love you, but I'm just saying," dementia, overlapping dialogue, and lots of bathroom breaks.

The acting is terrific in this local premiere at Pittsburgh Public Theater, and director Pamela Berlin orchestrates the action on the bi-level set beautifully, leaving room for tender human moments that are all the more moving for their brevity. It's quite funny, also.

As Ted Hoover notes in his review for CP, the play's ending is rather mystifying. But it is, if nothing else, open-ended, and provides lots of fodder for discussion.

The Humans has four more performances, tonight through Sunday.

The O'Reilly Theater is located at 621 Penn Ave., Downtown.