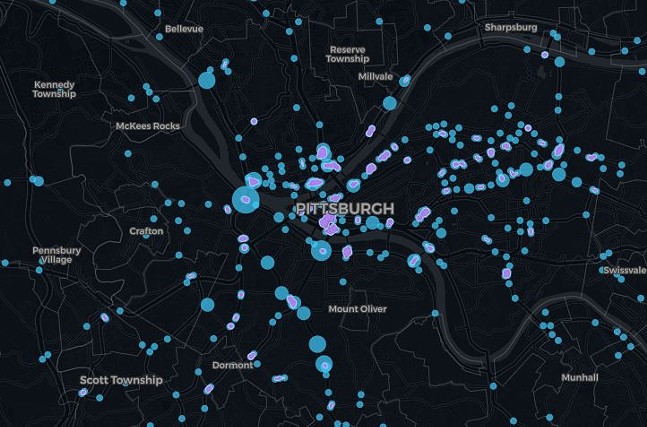 Image courtesy of Dallas W. Hartman P.C.
Map of car crashes in Allegheny County; the larger the circle the higher the number of crashes
A new study from Pennsylvania law firm Dallas W. Hartman shows Allegheny County has an outsized share of car crashes compared to other counties in the state and, in fact, has the most crashes of any county. Considering the Eastern Pennsylvania counties of Philadelphia, Delaware and Montgomery each have more people per square mile than Allegheny County, this is quite a dubious distinction.

According to the study, more than 15,700 crashes occurred at intersections in Allegheny County from 2014 to 2016. More than 40 percent of those occurred at just 787 intersections. The study also includes a map that shows where all the crashes have occurred and their frequency at those areas.

The deadliest intersection, according to the report, was at Mosside Blvd. and Lincoln Highway in North Versailles in the Upper Mon Valley, which tallied three fatal crashes from 2014 to 2016. Other problem intersections include spots on Saw Mill Run Blvd. in the South Hills and McKnight Rd. in the North Hills. Some areas, like Downtown, won’t surprise many for having a large concentration of crashes, considering the neighborhood's density and high volume of cars commuting each day.

Eric Boerer of bike-advocacy group Bike Pittsburgh feels the study should serve as a wake-up call to those designing and reshaping the area’s roads.

“Engineers like to absolve themselves by saying that crashes are due to user error,” wrote Boerer in an email to City Paper. “It's absurd to think that Allegheny County residents are somehow special or lesser drivers than other Pennsylvanians — it's simply that our streets are designed in a way that encourages bad behavior, within a very complicated terrain.”

Boerer believes traffic engineers in Allegheny County shouldn’t just focus on what roads get cars through intersections the fastest, and that safety needs to be a higher priority. He feels this is another call for Pittsburgh and Allegheny County to continue and up their efforts in creating a Complete Streets infrastructure, which accommodates cars, bicycles and pedestrians equally.

“We walk, we bike, we use wheelchairs,” wrote Boerer. “The design of our roads dictate behavior, so when designing these roads, we need to recognize that humans make mistakes so it's important to minimize the likelihood of a mistake resulting in a crash in the first place.”

And Boerer also notes that poor road design is likely not the only cause of the high number of collisions, especially involving people who are not in cars. A Bike Pittsburgh study, which compiled collision statistics from 2010 to 2015, noted that 23 percent of pedestrian-driver crashes and 32 percent of cyclist-driver crashes involved aggressive drivers.

The Bike Pittsburgh study also notes that while fatalities are down involving car-to-car crashes, pedestrian-to-car crash fatalities are on the rise. Boerer believes that focusing on the safety of the pedestrians first could have a waterfall effect to make intersections safer for pedestrians, cyclists and drivers.

“[This] is why we are encouraging Complete Streets policies that put pedestrians at the top of the road design hierarchy,” wrote Boerer. “If you design a safe place for pedestrians, it will be safe for everyone else.”