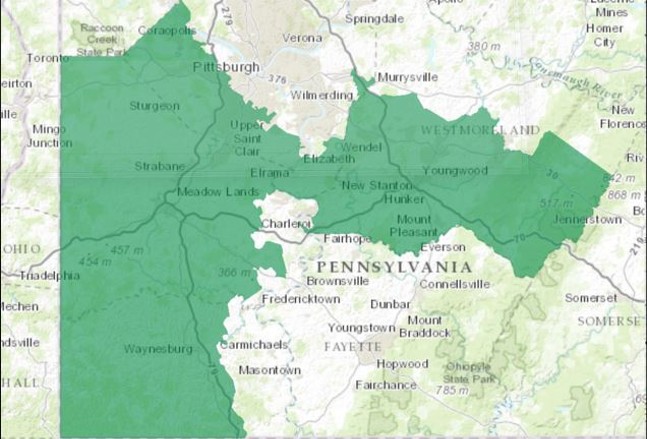 Image courtesdy Wikipedia
A map of Pennsylvania's 18th Congressional District
When Pennsylvania state Rep. Rick Saccone (R-Elizabeth) won the Republican endorsement the state's 18th Congressional District, on Nov. 11, most people following the race were shocked. That day, the Pittsburgh Post-Gazette reported, “many observers assumed [state Sen. Guy Reschenthaler (R-Jefferson Hills)] was the frontrunner,” but Saccone overtook Reschenthaler in the second round of voting to win 123-91.

Saccone canceled his bid to take on U.S. Senator Bob Casey (D-Scranton) after former U.S. Rep. Tim Murphy (R-Upper St. Clair) resigned amidst scandal in October, and instead campaigned for the open congressional seat. Saccone is arguably one of the most conservative legislators in the state house, noted for consistently attempting to bring Christianity into government and public schools, as well as for his fervent pro-gun stances.

As for Saccone's opponent, Democratic committee members in the 18th District will decide who represents the party come the March 2018 special election. With the Democrats picking their nominee this Sunday, Pittsburgh City Paper wanted to provide a brief rundown of all seven candidates for the vacated seat. (The 18th district encompasses southern Allegheny County, Washington County, Greene County, and the southern half of Westmoreland County.)

A licensed psychologist and professor at the California University of Pennsylvania, Brock is the only candidate from Washington County and the only African American in the race. He told the PG that he is a “fiscal conservative” but very much believes in the “social safety net.”

As of this report, Brock has raised almost $8,000 through a GoFundMe account for his campaign. His profile says he has grown tired of the political elite running Congress, and he identifies himself as "not a politician." Brock’s platform includes more equitable distribution of education resources, comprehensive criminal-justice reform, and advocating for a single-payer health-care system. Brock entered the race after Murphy resigned.

Image courtesy of Twitter
Cerilli is a former Miss Pennsylvania beauty queen and has some connections to President Donald Trump. In 2010, Cerilli tweeted, “So Donald Trump is considering the idea of running for President?? aka the owner of Miss. USA may be our future president? Go Mr. Trump.”

On Twitter, Cerilli defended this tweet, writing that it was from 2010, when Trump was a Democrat. But Politifact points out that Trump was a registered Republican in 2009 and then had no party affiliation in 2011.

Cerilli attempted to add scores of new Democratic Committee members before the nominating convention, but a Westmoreland County Judge ruled against her and told her it was too late.

Crossey was the first Democrat to enter into the race to challenge Murphy. He entered more than a month before Murphy's cheating scandal, which caused Murphy to eventually resign.

Crossey is a former Allegheny County Councilor and former head of a teacher’s union. He told the PG his top three issues are “education, job creation and health care.” According to Crossey’s campaign website, he wants to reduce college tuition costs for students, institute a few gun-control measures (like increased background checks and an assault-weapons ban), and increase accountability for perpetrators of sexual assault.

Federal Election Commission filings show Crossey has raised about $22,000, with about $10,000 coming directly from Crossey.

Iovino, a Navy veteran, also entered the race before Murphy resigned. She has served as assistant secretary at the Department of Veterans Affairs in George W. Bush’s administration. A self-described moderate Democrat, her biggest priorities are health care, jobs and veterans affairs.

Iovino has raised the most money of any candidate ($32,000, with only $2,700 from herself) and she has hired Matt Merriman-Preston, who just headed Pittsburgh Mayor Bill Peduto’s re-election campaign. In turn, she has had an extremely active campaign, including an active social-media presence, holding many meetings all over the district, and issuing attacks on Saccone and other politicians.

Early this month, she said in a press release that the Republicans' tax bill (which passed the U.S. House this week with support from all Pennsylvania GOP congressmen) will “hurt families from Whitehall to Waynesburg. Families throughout Southwest Pennsylvania, who desperately need tax relief, should not lose their deductions and pay more to fund tax cuts for corporations."

She has also released a video ad (see above), which has garnered praise from political reporters in Washington, D.C.

Lamb is one of the younger candidates in the race, but has already served in the Marine Corps and worked as an assistant U.S. Attorney in the Western Pennsylvania district. In the PG, Lamb’s campaign claims to have out-raised Iovino and other candidates in the few weeks he has been in the race. He entered the race after Murphy resigned.

In October, Lamb told TribLive: “We need to have faith in our future and build a 21st century government that helps create jobs, improve pay and benefits, improve health care and education.” On his campaign website, Lamb touts his experience working with the U.S. Attorney to tackle the opioid epidemic. However, Lamb has offered few detailed policy platforms publicly.

The final Democrat to enter the race, Seewald has worked as a professional gardener, and he wants to focus on supporting environmentally friendly legislation. Seewald’s experience in politics is limited. He ran unsuccessfully for a Mount Lebanon school-board seat, and has written fiction about politics.

Solomon, an emergency-room physician, entered the race before Murphy resigned. He believes that progressive policies are the way to win the district, despite its conservative leanings. Solomon told CP last week that policies like single-payer health care, wage equity and campaign-finance reform are the way to flip the district from red to blue.

“Because I am a physician, I know we need to move to a rational system of health care that will cover everyone,” Solomon said about the push for a single-payer health-care system. Campaign-finance filings show that Solomon has raised about $23,000, with about $8,000 coming from himself.

His campaign website also lists Solomon’s ideas on how to tackle racial injustice, as well as clean-energy proposals and publicly funded college.