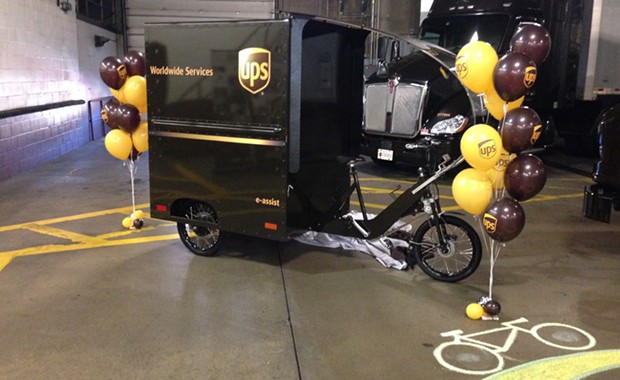 CP photo by Ryan Deto
UPS's electric-assist bike-cart
Bikes are a very contentious issue in Pittsburgh. So much so that Pittsburgh’s 2017 mayoral primary  had candidates run on anti bike-lane messaging. But bike proponents are moving ahead anyway. Pittsburgh Mayor Bill Peduto, a champion of bike lanes, dominated his anti-bike challengers in the May primary elections and won re-election on Nov. 7. U.S. Census figures show the city’s bike commuters increased by more than 50 percent from 2015 to 2016.

And now delivery giant United Parcel Service (UPS), is getting in on the bike action. Starting Nov. 9, Downtown Pittsburgh will be home to UPS’s only year-round delivery route that utilizes an electric-assist bike-cart in the U.S.

The pedal-powered cart can hold up to 15-20 packages and up to 400 pounds of cargo. It comes equipped with all the lights and turn signals that cars have, but is pedal-powered  Drivers are given a boost from an electric motor, that recharges as the driver pedals. (The cart is only partially powered with electricity; drivers must pedal to keep it going.)

“It’s good for downtown areas with narrow streets like Pittsburgh,” says Cain of the electric-assist bike-cart. “It has zero emissions and no fuel consumption. As more cities move towards sustainability, we want to follow that model.”

Karina Ricks, Pittsburgh’s director of mobility and infrastructure, is “thrilled,” that UPS will be utilizing bike-powered delivery in Downtown.

“This aligns with our climate-change goals, we like progressive solutions like these,” says Ricks. “This will help with traffic congestion, given our narrow streets Downtown.”

UPS’s Three Rivers division manager Nick Passaro says the new bike cart will reduce carbon emissions, noise and congestion Downtown. “We want the world to view Pittsburgh as a progressive place, that cares about the environment.”