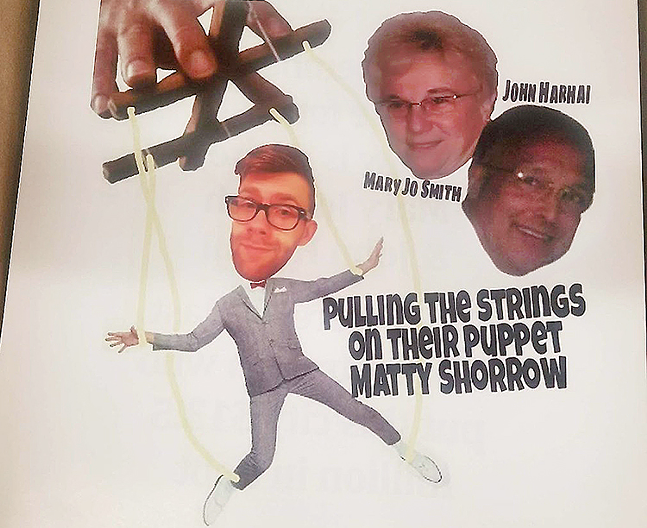 Image obtained by City Paper
Flier depicting Matt Shorraw as a puppet
When President Donald Trump visited an aluminum factory in the Mon Valley town of Monessen in June 2016, it was a game-changing moment. A shift occurred that put a Republican presidential candidate in a place one had never really been before: championing unionized heavy-industry workers in Pennsylvania. And this was all orchestrated by Monessen Mayor Lou Mavrakis, a Democrat, who invited Trump to campaign in the small town.

But while this visit might have helped Trump, who is now president in part due to an improbable Pennsylvania victory, Mavrakis took heat from Monessen Democrats, and they cast him out in the 2017 Democratic primary election. (The actual impact of Trump's visit is questionable. Monessen voters supported Democratic presidential candidate Hillary Clinton by a more than 12 point margin). Mavrakis lost the primary to Matt Shorraw, a grad student at California University of Pennsylvania with a progressive platform. And even though Shorraw is the presumptive mayor since his name is the only one on the general-election ballot, Mavrakis is still attempting to hold on to his seat with a write-in campaign.

Part of Mavrakis' campaign appears to be targeting voters and encouraging them to fill out absentee ballots, even if they will be in Monessen on Election Day. A PDF obtained by Pittsburgh City Paper shows a letter that was mailed out by Mavrakis’ wife Glenda Mavrakis, to a Monessen constituent, and signed by Lou Mavrakis. The letter gives step-by-step instructions on how to write-in and vote for Mavrakis, and even suggests that voters call Mavrakis, so he can pick up, stamp and mail their ballot.

“If you wind up in town on Election Day, then you need to vote at your booth,” says Bonin. “I believe the ballots are supposed to be mailed out directly by the voter. If you have someone that is bringing in the ballot for them, then there is another form for that and a whole other process.”

Colleen Shanahan-Major sent the PDF copy of the letter to CP . Shanahan-Major says that two months ago, Mavrakis pulled up to her Monessen home, told her about his write-in campaign, and then asked her to sign a form to see if she wanted to fill out an absentee ballot. She says that she told Mavrakis she wasn't interested, since she will be voting in person on Nov. 7 and is "perfectly capable of getting to the booths."

Shanahan-Major says Mavrakis persisted, and she eventually signed his form. "I felt like he was not going to leave my property unless I signed it," she says. Shanahan-Major adds that she didn't fill out an absentee ballot, but says she worries other Monessens residents will.

"My ex-father-in-law is 97 and lives up the street," says Shanahan-Major. "And if someone told him that he could fill out an absentee ballot, he would probably take it. I do not want him to fall prey to this."

CP shared the letter with Bonin, and he notes that the letter itself doesn't encourage people who aren't qualified to vote by absentee ballot to do so, but he says the end of the letter gives him pause because Mavrakis asks voters to call him personally so he can pick up and mail the letter. 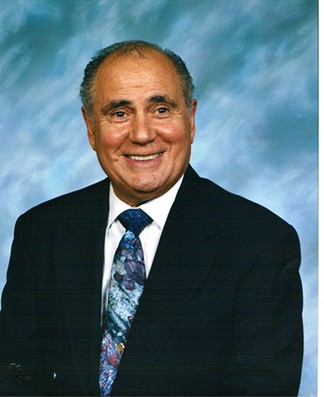 Photo courtesy of Facebook
Lou Mavrakis
“If the campaign is handling these ballots in any way, this is unlawful,” says Bonin.

The last sentence of the Mavrakis’ letter reads “if you need any assistance or have any questions on completing the Ballot do not hesitate to call me.” Then the letter is signed, “Lou Mavrakis.”

CP called both phone numbers listed on Mavrakis' letter. At the first, a woman answered, and CP left a message requesting a comment. At the second, a man answered and asked who was calling and then hung up. CP did not receive a comment from Mavrakis by print time.

Regardless, Mavrakis’ absentee write-in campaign might be gaining traction. According to the Westmoreland County election bureau, there have been 585 absentee ballots issued for the town of Monessen and 398 returned. In the 2016 general election, when voter turnout was significantly higher than municipal elections of 2015, only 124 absentee ballots were issued, with only 113 returned.

Bonin says he has been involved in large-scale, write-in campaigns, but he hasn’t seen many that rely so heavily on absentee ballots. He notes that absentee ballots can be challenged by candidates, but a $10 deposit must be put down for each absentee ballot.

Monessen has about 700 registered Republicans who could back Mavrakis, given his kindness to Trump. But, the town is still overwhelmingly Democratic. Even with a turnout rate of 19 percent in the 2017 primary, more than 1,400 Democrats still cast ballots. (Shorraw received 735 of those Democratic votes.)

Mavrakis might also receive some help thanks to fliers being sent around Monessen, depicting Shorraw as a puppet of the former mayoral administration of Mary Smith. The flier reads “Remember.. A vote for Matt Shorraw is a vote for Mary Jo Smith and [former Monessen councilor John Harhai]. THEY were the last administration who put this city $13.5 million in debt” and then shows a caricature of Shorraw as a puppet being controlled by Smith and Harhai.

Photo courtesy of Matt Shorraw
Matt Shorraw
But Shorraw says he has little to no affiliation with Smith, other than in her role as chair of the Monessen Democratic Committee. He says Mavrakis, who is almost 80 years old, is reneging on a promise to “step aside” after Shorraw won the primary by a 52-48 margin.

“I think it is unfortunate that during races like these, certain candidates and individuals feel that is necessary to run negative smear campaigns,” wrote Shorraw in an email to CP. “It is unproductive and unprofessional, and it tarnishes the office, as well as the voting process. It is because of petty, negative politics that places like the City of Monessen are struggling to move forward.”

A former employee of a local office-supply store, who asked to remain anonymous out of fear their former employer will contact police, told CP in an email that local pet-store owner Buzzy Bryon requested a $600 order for the fliers. The former employee worked at the store when the fliers were requested, but recently quit. The former employee said the store normally doesn’t allow fliers like these to be printed in such quantity, but since Bryon allegedly placed the order online and prepaid, “We could not say no.”

“The backs of the posters were riddled with inaccuracies about [Shorraw] and even misspelled his name,” wrote the former employee to CP.

CP called Bryon’s pet store, and one of his employees said he would be interested in commenting on the fliers and gave CP Bryon’s cell-phone number. But when CP called Bryon, he hung up after CP refused to reveal the name of the former employee who tipped off CP to the fliers.

In the end, Shorraw just hopes the mudslinging and absentee-ballot campaign doesn’t distract voters from the issues facing the former steel town. “Specifically, in the case of Monessen, 7,600 people are being held hostage, because issues from the citizens are not being discussed or resolved,” wrote Shorraw.