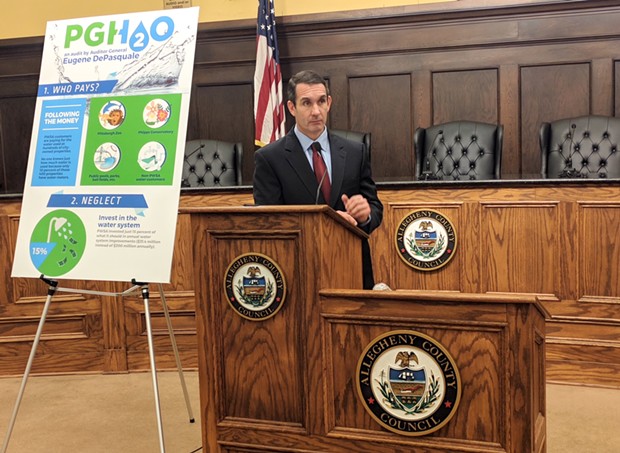 CP Photo by Rebecca Addison
Pa. Auditor General Eugene DePasquale
This summer marked one of the hottest in Pittsburgh history. So think of the thousands of gallons of water that were used to maintain city attractions like the Pittsburgh Zoo and PPG Aquarium and  the Phipps Conservatory Botanical Gardens this year. The largest tank at the PPG Aquarium holds 15,000 gallons of water alone.

But according to an audit by Auditor General Eugene DePasquale released today, these institutions receive water from the Pittsburgh Water and Sewer Authority free of charge. Annually the water given freely to Pittsburgh institutions amounts to more than 600 million gallons.

The audit released by DePasquale today highlighted shortcomings at the authority including increasing debt, poor capital investment and mismanagement. And while none of this is new to the thousands of PWSA customers who have struggled through one issue after another with the authority in recent years, the audit did make a number of recommendations for how PWSA can address it's problems.

“It should come as no surprise that fixing PWSA’s water and sewage system could take decades and cost billions,” DePasquale said at a press conference at the Allegheny County Courthouse earlier today.  “Stabilizing deteriorating infrastructure and investing in necessary improvements is obvious and, based on PWSA’s track record, customers are understandably concerned. PWSA absolutely cannot continue down its current path."

Unlike the other audits done of PWSA, DePasquale's didn't focus on the authority's former partnership with utility management corporation Veolia Water North America. Particularly, DePasquale says his office was unable to determine weather Veolia or PWSA was at fault for a corrosion control chemical switch some believe contributed to the city's high lead levels.

“Everyone — customers, PWSA, even city officials — knows and acknowledges PWSA has extreme financial, management, infrastructure and water quality problems,” DePasquale said. “PWSA customers are tired of hearing how broken everything is and want to start hearing about how the system is going to be fixed. The PWSA board needs to immediately gain control of the situation and start doing what’s right for residents."

During the same time period, from 2012 to 2016, DePasquale says PWSA failed to make necessary investments in infrastructure upgrades. And he says the high debt and low investment can be traced back to the 1995 agreement between PWSA and the city.

"The 1995 deal set this authority on a collision course to financial disaster. With all that debt it is no wonder that PWSA invested just $31.4 million annually in capital improvements from 2012 to 2016. That's it. However, based on it's size and value, on average, if you look at national standards of what should have been done, it should've been investing $200 million annually. That means they were probably short about $170 million a year and this was compounded.

"That means PWSA invested just 15 percent of what it should in annual system upgrades and repairs. This lack of capital improvement investment contributes to the deteriorating infrastructure that fails routinely forcing whole neighborhoods to boil their water."

DePasquale's first recommendation is to amend the 1995 co-op agreement between PWSA and the city. This includes the provision  that provides free water to city-owned properties like the Zoo and Phipps. In 2016 and 2017, the cost of water for city-owned properties was approximately $6 million and $6.84 million respectively.

“Residents have to pay a PWSA bill every month, but 400 city-owned properties including public pools, parks and ball fields, the Pittsburgh Zoo and Phipps Conservatory receive free water," DePasquale said. "Right now, PWSA customers are paying for hundreds of millions of gallons of water used at city-owned properties. Some of these are important city assets that help boost the economy, but the problem is, no one has a clue exactly how much water is being used."

DePasquale also recommends addressing the structure of PWSA's board so that seats are not filled by employees paid by the city.

“Either PWSA should be a separate independent authority and operate as such, or the city should operate the water and sewage system as part of the city’s functions,” DePasquale said. “Arguments can be made for either scenario, but there is no decent argument for keeping the dysfunctional current structure.”

"I want to thank the Auditor General for this detailed look into the PWSA, which confirms many of the issues that have long concerned me about the authority's operations, debt and infrastructure. Deep and fundamental changes are necessary to restructure the authority and preserve the city's water system for generations to come.

While the audit expresses concern with city government's influence on PWSA, it is my duty to protect this valuable city asset and the safe water owed to the people I represent as Mayor. The city owns this water system after all, and when there are problems with it people come to me to look for answers.

We will certainly consider some of the other changes General DePasquale has recommended on the city funding and free water the city receives from PWSA, especially if such funds are put back into the authority's infrastructure needs."