The Allegheny Cemetery began as a 100-acre burial ground in 1845, but today it spans 300 acres and is home to more than 124,000 "residents." For many people, the cemetery is a place of mourning and remembrance, and for others it’s simply a great place for walks, runs, wildlife-spotting and impromptu history lessons. This guide focuses on just a few of the cemetery's highlights. 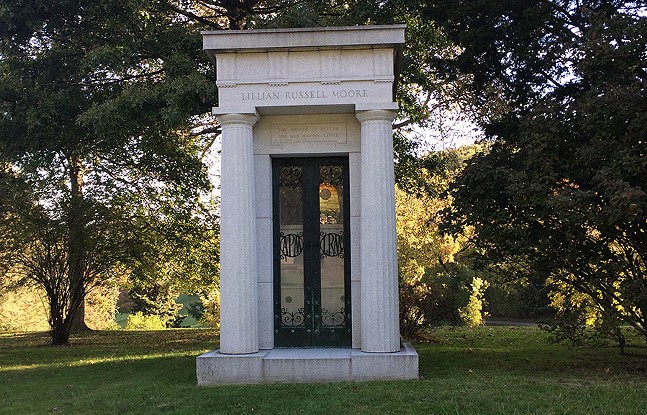 All throughout the cemetery, there are mausoleums, with intricate carvings and stained-glass windows, usually marked by the name of the family's patriarch. Even in death, people like to flaunt their wealth. Helen Louise Leonard was born in Iowa in 1861, and died in Pittsburgh in 1922. She is buried in a modestly regal mausoleum bearing her full stage name, Lillian Russell Moore. She was an accomplished opera singer and actress, known as "The American Beauty." She was so well known for her voice that Alexander Graham Bell drafted her to sing over the wire to President Cleveland, as he made first long-distance phone call. She was active in the women's-suffrage movement and sold Liberty Bonds during the first World War. An engraving on the mausoleum below her name states, "The world is better for her having lived," and who could argue otherwise? 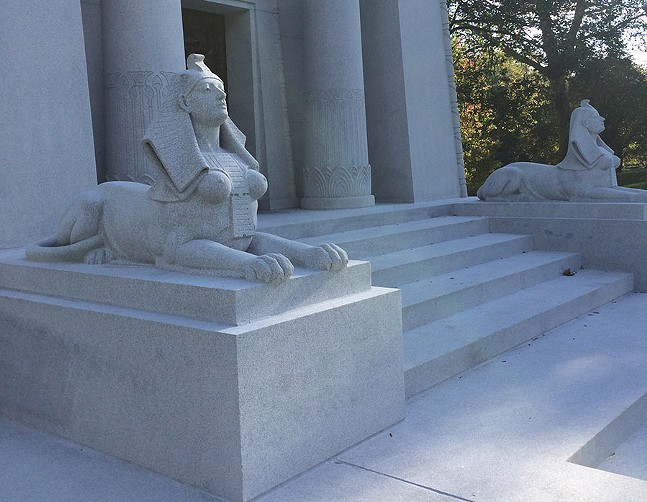 One of the most recognizable structures for frequent cemetery visitors is the massive, Egyptian-style tomb flanked by two regal sphinxes. It was erected upon the death of Emil Winter, one of the founders of the Pittsburgh Steel Company and is almost an exact replica of the grave belonging to department-store mogul F.W Woolworth. Yes, almost. People tend to beat around the bush when talking or writing about this grave, but let's cut to the chase: These sphinxes have big boobs. We've all seen pictures of sphinxes, which are usually depicted as male and boobless. Even the one that have boobs have a sensible size and shape. But none of that for Winter; he's spending his eternal rest under the guard of two cat/people with huge knockers. 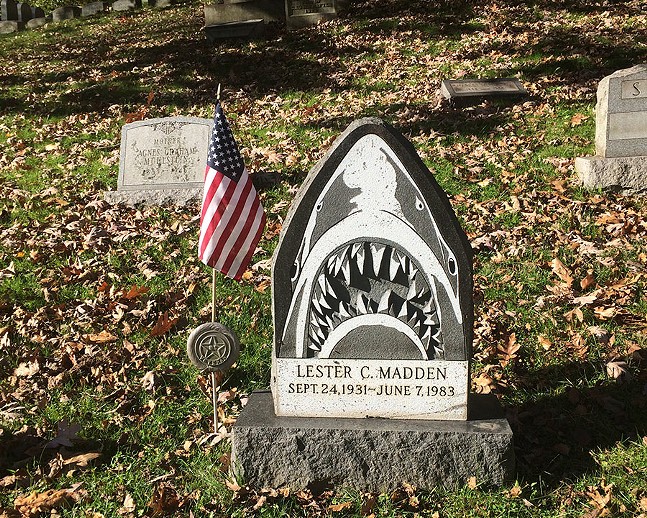 Have you ever loved a movie so much, you wanted to be buried with it? Lester C. Madden, a Korean War veteran and apparent Jaws superfan, died in 1983 and is forever commemorated with a realistic shark stone. Cemeteries are naturally serious, and this headstone is so unexpected that it leaves all others looking overly morose. More gravestones should be fun. This is what will mark your body forever, where you family has to trek to visit you! If you have the means, why not get a little zany? If I had a gravestone based on a movie, it would be the M&M pizza from The Princess Diaries. 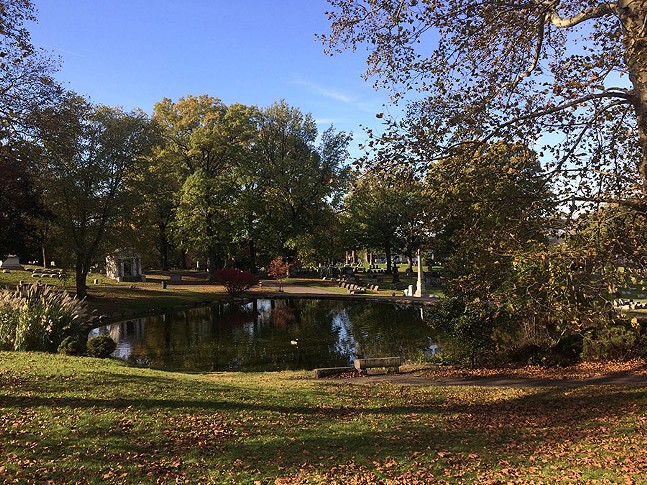 One day this summer, I realized it was the solstice, and I had nothing planned. The longest day of the year and I'm just gonna lie in front of my fan for four or five hours? Guilt outweighed my laziness, so I walked to the cemetery and settled in at one of the prettiest spots just in time to see a damn fine sunset over the twin ponds. It's a while until the next summer solstice, but the ponds are a great place to watch the sunset 365 days a year. An 1865 map of the cemetery shows five ponds on the grounds, but several had to be filled due to pollution, so cherish these bad boys.

I hesitated even sharing my secret favorite bench, but if you've read this far, then you deserve it. It's not even a secret — just hidden enough that it's only likely to be found by accident, which is how I found it. Just by the Jaws gravestone, there is a gravel path leading up a windy hill. Halfway up, there is this bench, from which you get a great view of the cemetery below, as well as the trees, bikers and joggers and abundant deer. It doesn't face the sunset, though it's surely perfect for the sunrise, if you can get up for that. 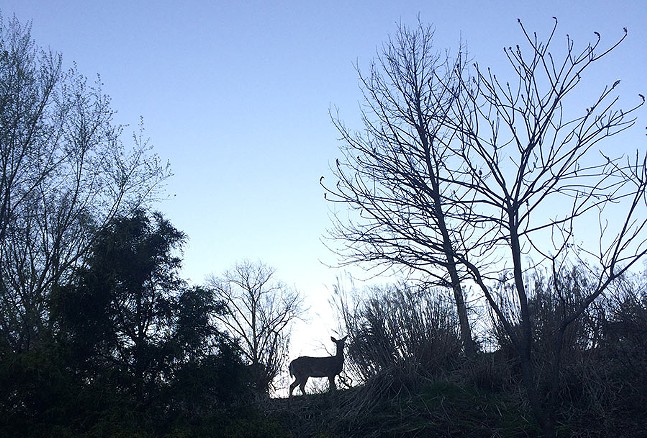 October happens to be goose season, so now is a perfect time to see large groups of fowl walking around like they own the place. However, it's no secret that deer are the true rulers of this land. I never walk through the cemetery without seeing at least one deer, and it's not uncommon to see three dozen. I once spent 20 minutes watching a mama deer feed the tiniest baby deer I have ever seen. There are also chipmunks, toads, foxes and more. Obviously, do not feed any of them.


Even though they're filled with death, and probably ghosts, cemeteries are actually very alive. There's changing foliage to see, relevant history to consider, and so, so much deer poop to avoid.