In the world of wrestling, two companies stand out as powerhouses for producing and fostering incredible talent. They are Ring of Honor and New Japan Pro Wrestling, and for several days this year, they teamed up in the states to wrestle under the banner of Global Wars.

Here's what went down:

Before the doors opened, the wrestlers stretched in the ring, production team members hurried around checking lights, assigning jobs and testing sound. Even though many of the talents walking in are regarded as some of the best in the world, there was no visible ego.


When the doors opened for the "meet and greet," a line to the upper level of AE immediately stretched out to the entry way and didn't shorten for nearly a whole hour. The energy at this point was absolutely electric. A sold out crowd of people buzzing excitedly, making new friends with the people around them.


It’s always funny to be a wrestling writer, because ultimately you’re still a wrestling fan. When the interviews are over and the show begins, it’s impossible not to lose yourself in the energy of the crowd and the action in the ring.


From the minute the show began, an impassioned Pittsburgh audience delivered an arsenal of chants, ready to pound on the metal barricade and stomp its feet for the performers it so reveres. Streamers were carefully assembled for tossing into the ring when performers entered the squared circle to enter into battle. CP Photo by Meg Fair
Jay White enters in a colorful fog on his way to the ring to take on Jay Lethal.

Jay Lethal vs. Jay White was a brilliant match in which both men showed off their amazing talents and also made me wince a lot with all of the slaps and chops they were throwing at each other. It was a high-risk match filled with dives and submissions and amazing sells. By the end, the crowd was chanting, “Both these Jays!”

One of the matches I was anticipating the most was the Women of Honor six-woman tag team bout. In one corner were the apparent faces, Britt Baker (#Brittsburgh!), Faye Jackson and Sumie Sakai vs. Deonna Purrazzo, Mandy Leon and Jenny Rose. All of these women absolutely brought it, and the crowd was so vocal in its support of Baker with its Brittsburgh chants and cries of “We want Baker!” as soon as the match began.


I absolutely love watching Deonna Purrazzo wrestle because she’s just so strong, and her confidence is clear in the ring. And Leon, fresh off two months of working with Stardom in Japan, used some submission moves that had me out of my seat.


Ultimately it would be the faces who walked out as victors after a hard fought battle; the battle also featured a diving cross body from the top rope via Faye Jackson that was absolutely marvelous, but the real winners were the crowd who got to watch the match.


The six-man Proving Ground Instant Reward Match featuring Adam Page, Josh Woods, Punishment Martinez, Kushida, Matt Taven and Kenny King was another match of technical craft, made compelling by how different each wrestler’s style is. It was particularly joyous to watch the sassy-as-fuck Kushida flip off his opponents and bring the punishment.


It would be absolutely insane to say that anyone receives as much adoration as the Bullet Club. Just the mere presence on Adam Page, The Young Bucks, Cody Rhodes, Marty Scurll and Kenny Omega had people on their feet. 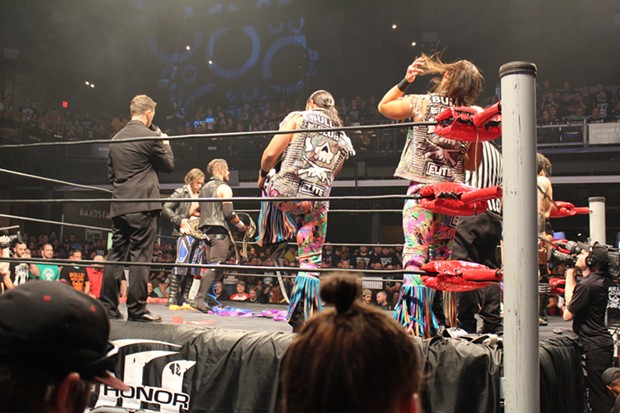 CP Photo by Meg Fair
The Young Bucks prepare for their match against Motor City Machine Guns (left) and The Kingdom.

And rightly so. The Young Bucks match against Motor City Machine Guns and The Kingdom was such a delight, as the endless charisma of the Bucks and technical skill of MCMG was a nice pairing with the bratty attitude of the Kingdom. And who doesn’t love watching people get super kicked in the head?!


The main event was a surprise six-man tag title match between Bullet Club (Cody, Kenny Omega, Marty Scurll) and Chaos (Will Ospreay, Yoshi-Hashi and Toru Yano). It was perfect pairings to further beef between the individuals on each team, and it was also one of the loudest rooms I’ve ever been in during the event.


Yes, folks were chanting, “Will’s a cat!” as well as, “The! Elite! The! The! Elite!” When Chaos taunted Bullet Club with a “Two sweet” (for which the Bucks had recently been served a cease-and-desist from WWE), the entire room chanted, “Cease and desist!” over and over. Marty Scurll even broke some fingers, to which the crowd gleefully chanted, "You sick fuck!" After another amazing match of high-risk spots, shenanigans with extra bodies in and outside the ring and a retention of the belts by Bullet Club, Cody cut an impeccable promo. He then handed the mic to Kenny Omega who also worked his magic, issuing a genuine thank you to the audience and bidding everyone a “Goodbye and good night...bang!”


This was the most entertaining, technical, powerful wrestling event I’ve been to in my tenure as a wrestling fan. The ROH and NJPW performers know how to make every show, even a sold out show at Stage AE, feel as intimate as a tiny indie show, while feeling as important and huge as a pay-per-view. They genuinely want to be the best and put on the best possible show, and that translates in their promos and in-ring skills.


If you aren’t already subscribing to ROH or NJPW, I highly recommend it. The storylines are carefully crafted and refined over time, the wrestling is impeccable and the energy of the crowds is truly something to behold.

One last night at the Bloomfield Bridge Tavern