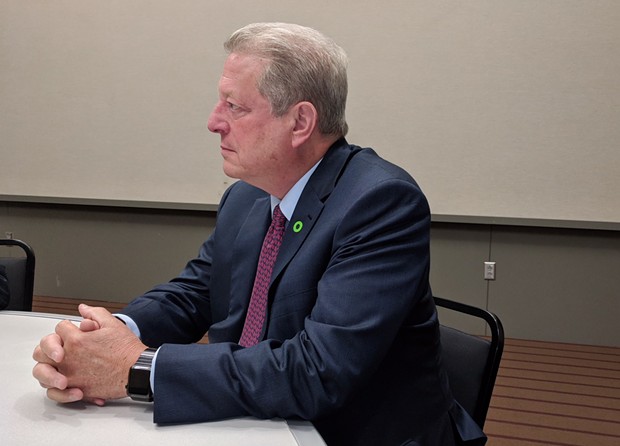 CP photo by Rebecca Addison
Al Gore
In the months after the presidential election, former Vice President Al Gore spent time talking with President Donald Trump about the threat of climate change and the importance of sticking with the Paris Agreement, created to address greenhouse gas emissions. We now know those talks were futile, since in June, Trump announced his intention to withdraw the United States from the global agreement.

But while things might appear bleak, in an interview with Pittsburgh City Paper this week, Gore said he remains hopeful. And he said projections indicate the United States is going to meet and exceed commitments previously made as part of the agreement, whether Trump likes it or not.

"I  spent a lot of time trying to convince him to stay in the Paris Agreement, because I was worried that if he pulled out, some other countries would use that as an excuse to pull out themselves," Gore said. "But the day after his announcement, I was relieved and happy that the rest of the world said, 'No, we're still in the Paris agreement; we don't care what [Trump] said.'"

Gore was in town this week for the Climate Reality Leadership Corps Training at the David L. Lawrence Convention Center, which runs Oct. 17-19. The event was organized by the Climate Reality Project, an education and advocacy nonprofit focused on climate change and founded by Gore.

Despite the  partisan divide in the United States right now, Gore said there are many Republicans who understand the importance of addressing climate change. He cited the "green Tea Party," a conservative environmental group as an example and said recent tragedies are bringing even more people around.

"These extreme events connected to the climate crisis are having a big effect on people," Gore said. "We've had four hammer blows back to back with the hurricanes and fires in California."

But that doesn't mean there isn't still a battle for activists to fight. Gore said there are still three main sources of climate denial and opposition: the fossil fuel industry, those who advocate for smaller government, and the human tendency to procrastinate. And some of these climate-deniers now hold positions of power in our government.

"When climate [deniers] floods social media with manufactured doubt, it gives some people the opportunity to say, 'Let's wait on this,'" Gore said. "And the carbon-polluters have convinced legislators to subsidize fossil fuels at a rate 26 times larger than the meager subsidies for renewables, so they're propping it up, and now Trump has proposed a massive increase in subsidies for fossil-fuel burning.

"We're still adding 110 million tons of global-warming pollution into the atmosphere every day as if it's an open sewer."

So how can Gore and other environmental activists convince people to take personal responsibility for addressing climate change when our country's leaders are moving in the opposite direction?

"The development of these incredibly cheap alternative-energy solutions has also had a big impact on people, especially those who have figured out they can save money by switching from  fossil fuels to solar on the roof, or wind power through a provider," Gore said. "It continues to come down in cost, and it's now the cheapest source in many reasons, and soon it will be definitively cheaper everywhere."

The many hobbies of Demetri Martin