As a lover of stick figures and public radio, this story was too good to pass up.

Last week, I was discussing the NPR/WAMU show 1A with CP intern Hannah Lynn, and she mentioned that her friend John drew the lasso stick figure. I'm a big fan of the show, but I can't say I pay a whole lot of attention to its Twitter, so I didn't know what she meant. Basically, every Friday there's a weekly news roundup (a holdover from the program it replaced, The Diane Rehm Show); every tweet related to the roundup incorporates a small stick figure wearing a brown hat, holding a lasso, smiling (sort of).

Part of the appeal for me is that 1A is a fairly serious news program and stick figures are notoriously unserious. These crudely assembled meme-ish images feel so at odds with the rest of the branding (check out the logo) but it somehow feels right. Maybe that's the point. Maybe Friday mornings are a good time to take a deep breath after a week of troubling news, and smile at the little cowboy casting its sights on a deplaning Louise Linton.

Anyway, I've spent the last week scrolling through roundup tweets instead of working, so it seemed only fair to my employers to turn this into something publishable. I reached out to the illustrator, John Meyer, who graciously answered my questions via email this week.

Before we jump in, what is the figure’s name?
The figure does not have a name. I really wish I had an answer, but nothing obvious has come to mind. 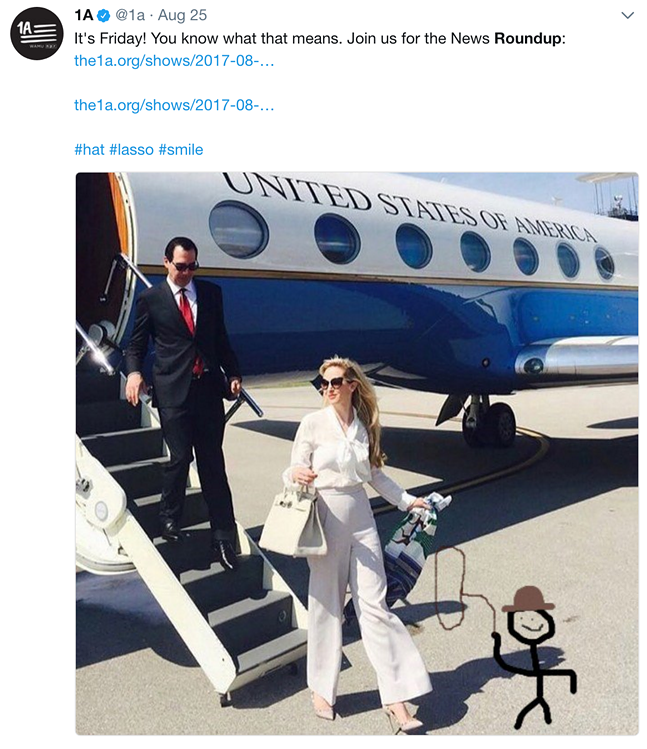 Can you tell me the story of how the lasso figure came to be a part of 1A’s branding? When did this happen?
At this same job, I listened to an unhealthy amount of public radio to kill time, and I became a huge fan of The Diane Rehm Show. The Friday News Roundup was always a great segment, and so I was thrilled when Joshua Johnson confirmed on air that the roundup would continue. After sharing a quick sketch with some coworkers, I sent an email to the 1A e-mail letting them know I was thrilled the roundup was continuing. Shortly thereafter, a producer on the show replied and asked if they could use it. I, of course, said yes, and that is pretty much the story! Over the Labor Day weekend, that same producer from the show happened to be in Pittsburgh, and he gave me some merchandise which was really neat. Apparently their internal staff really likes the lasso guy which is both flattering and confounding.

Screenshot of the email Meyer sent to 1A
How long did the drawing take you? How did you make it?
The drawing was made in a Google hangout chat. Basically, you can click a pencil icon in the chat window, and from there can send rudimentary sketches via IM. The drawing probably took 5 minutes at most, and after making it I saved a copy to send to 1A.

What do you do for a living? Has this mascot creation changed your mind about your career in any way?
I'm a data analyst at a digital-ad company. In short, this hasn't changed my mind about my career since I don't see it as a reflection on any kind of internal artistic ability. I just think it's one of these strange things that takes on a life of its own.

If you had a radio show, what would its mascot be?
Probably some kind of graphic-art depiction of a "vintage" microphone if it was some serious radio show. Otherwise, maybe a dolphin.

Is “mascot” the wrong word? Am I too interested in this? Do you even think about this day to day?
I never thought of the lasso guy as a mascot, but maybe you're onto something. I feel like the figure is mostly just a whimsical thing to lighten the mood in their twitter feed, which is otherwise reasonably serious, so in that sense, I guess it is a mascot. As to the question about whether or not you think about this too much, I don't think so. Internally, I really don't think about the lasso guy, unless someone asks me about it, or my mom sends me a message that he appeared on Twitter. So, in that sense, it does seem like other people think about him more than I do!

Followup: How a doodle by a Pittsburgh-based data analyst became the pseudo-logo for 1A radio show