Can a city have too many music festivals? Unless you're a crusty curmudgeon, no, not really. Music, food, neighbors and sunshine are generally agreed on to be cool, good things.

Pittsburgh in 2017 is pretty stacked in this department, with festivals of varying sizes and personalities running throughout the year. Some are dedicated to neighborhoods, some to genres, and some to philanthropy. Joining the scene this year is Le Creme, a day-long music festival in Allentown, founded by the owner of Supermonkey Recording Co., Christian Groblewski. The iconic rock band Living Colour is headlining, but there's a robust bill of local (mostly rock) acts filling out the day, including Joe Grushecky & The Houserockers and Venus in Furs.

For a little background on how Le Creme came to be, read City Paper's Q&A with Groblewski.

Can you trace the idea for Le Creme back to one specific moment?
When I realized that there’s a lot of great things happening in Allentown. And a lot of people in Pittsburgh, when they ask me where my business is and I tell them I’m in Allentown, they automatically think Allentown, Pennsylvania, and they think, “Oh my god, that’s five hours away, I’m not going there.” [Laughs]

Nobody knows this place is here, but there’s a lot of buzz going on and great things happening. So I wanted to bring Pittsburgh to Allentown. I figured, if we get a big-time act, people are going to show up.

I didn’t really start doing anything until after Deutschtown [Music Festival]. I was like, "We need to do something like Deutschtown in Allentown."  I didn’t want to do the same thing as them. I don’t like to copy other people, I like to do my own thing.

I looked at the festivals that were going on, like Thrival and Deutschtown and Millvale. I love the support of the local music scene in Pittsburgh — that’s how you build a music scene. But both Millvale and Deutschtown do 100 percent local acts, and I didn’t want to do that. I really wanted to do this to showcase the great bands that are my label that play rock 'n' roll here in Pittsburgh.

I looked at Thrival, which gets a big name headliner, and I do like that idea. The positive of Deutschtown is that it’s free, right? You can go there for free and see a great concert and have a great time. At Thrival, you have to pay the ticket price, but with that, you get the big-name headliner. So I tried to get the best of both worlds, get the big headliner and keep it free. 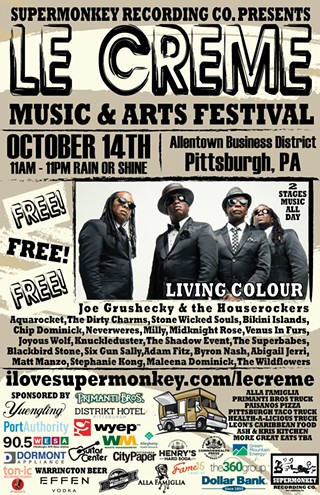 What’s been the most challenging part of putting together Le Creme?
Raising the capital in less than two months. I want to make it free, right? So who’s gonna pay for it? So I was fortunate to get some really great sponsors, all those people you see on the flier, all chipped in to help make this a success.

Are you doing this all on your own?
As far as the people who have really helped the most, I would definitely say that the first name on the list would be Jonathan Vlasic over at Alla Famiglia. He’s been a big help because we’ve been using his property for a lot of it, but really just all the businesses. Laura, at Fame15, wrote the release for us, the Commonwealth Press guys are doing shirts and banners and stuff. I could go on and on.

How many people are you expecting?
[Laughs] We hope a lot of people in Pittsburgh come up and check out Allentown. There’s a buzz on the street, my social media’s definitely bumping. Everybody in the neighborhood knows about it, there’s people talking about it, and that’s a great thing. That was the point, to get them talking about it and to utilize a great band like Living Colour that is world-renowned, and they’re playing our backyard! It’s pretty awesome. And to use those guys and their success as a tool to help bring Pittsburgh to Allentown … to be blunt, it wasn’t always the safest and greatest neighborhood for a long time. People were nervous about coming up here, and it’s not bad at all — nothing happens up here, it’s completely safe. All these businesses are new, nothing’s gonna happen up here. It’s the safest place in Pittsburgh, if you ask me.

What was the inspiration for the name, Le Creme?
Well, let’s see. We’re kind of on top of the hill, ya know? I like to surround myself with the best people I know in the business, because you’re only as successful as the people you surround yourself in life. That’s my opinion and I’m sticking to it. I really want to work on making this a great event and the name of your event means something, why you’re doing it. So I really wanted to make a great event for Pittsburgh that is at the top of the hill, 'cause you know the cream goes on top.