Photo courtesy of VIA Music Festival
Visuals by Anna Henson
In its eighth year, VIA has crafted an accessible weekend of music, art and education from both local and international groups.

This year’s event will take place at Carnegie Mellon University, Ace Hotel, and Hot Mass, and is a connected effort between VIA, girlFx, Honcho, Mesh, Hot Mass, Carnegie Library of Pittsburgh Music Lending, Listening Spaces, Ace Hotel and CMU. Most of these connections were forged in the earliest years of the festival, its original team branching off into a myriad of different projects that still collaborate.

“VIA Festival, and events like Weekender, happen because of an evolving network of people. Most of us hustle year round on our own projects that are growing and attracting various kinds of national and international attention,” explains Lauren Goshinski. “The intention of VIA is to galvanize these efforts.”

Goshinski, Co-founder and Director of VIA, is director of exhibitions at Pittsburgh Filmmakers and a member of the girlFx collective (pronounced Girlfriends). She has been a part of the event since its inception.

“The constant thread of [VIA] is to make space for new artists and audiences to come together,” explains Goshinski on the phone. “The partners I’ve worked with, people who come out every year, volunteers — we all make this space together.

“It’s an interesting combination of stubbornness and agility to create these spaces."

Goshinski’s programming for the event is centered around Friday and Saturday. The day starts off with a lecture and conversation with experimental electronic musician and Elysia Crampton at CMU, then kicks off the weekend with a stacked lineup: Elysia Crampton (Calif.), Haleek Maul (Barbados), EMBACI (NYC), D0UZE (NYC), Anna Azizzy (Pittsburgh).

Photo courtesy of Julia Grossi
Elysia Crampton will both lecture and perform at this weekend's VIA Music Weekender.
The four musicians from out of town and different networks have all collaborated in the past.

“They make up a family of sounds. For example, some artists have collaborated on tracks while living in very different places, so you may hear instances of them in each others’ work. That doesn’t happen very often,” says Goshinski.

“[Stiles and Henson] will create visuals through live coding, and release the code afterward as a documentation of their performance,” says Goshinski.

In addition to innovative performances, VIA has been internationally recognized as one of the most inclusive festivals for femmes and women of color. By attending VIA, that’s an expression of support for lineups that aren’t wholly white and male.

“Lineups don’t exist in a vacuum; they reflect our values and can seed new ones,” says Goshinski. “Who and what we support, and come out for, matters."

For just $20, attendees can see talent from all over the globe, displaying myriad styles and perspectives. It’s an incredibly accessible price for a program with so much internationally acclaimed talent.

Photo courtesy of VIA
D0UZE performs Friday at Ace Hotel.
For the organizers of the event, it’s not about making money. That’s why several other events throughout the weekend are free for those who can’t afford the $20 ticket. These include the Crampton lecture prior to the show, and the all-day Saturday programming of DJ workshops and instrument petting zoo.

“The free lecture and workshops are happening thanks to the generosity of each partner to chip in, because we saw a purpose in teaming up. And tickets from each show go straight to covering the artists’ fees,” explains Goshinski.

The bottom line is not the concern of VIA’s organizers. Community, education and support of artists is the core of the mission.

“I’ve invested a lot in VIA and these networks,” says Goshinski. “But, like most people I know, I still have to have a full-time job. I’m serious about this work, and finding sustainability for all of us. We’ve been able to create an independent base for attracting and supporting a wide range of artists in step with scenes in New York, Mexico City, Berlin.

“I believe what we all do brings a depth and value to Pittsburgh far above the price of admission.”

For the full schedule and the lineups of each show, dance party and workshop, check out VIA’s Facebook page. 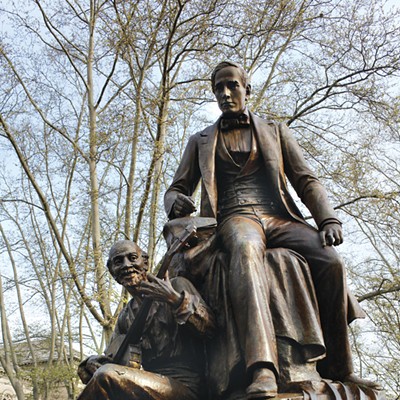