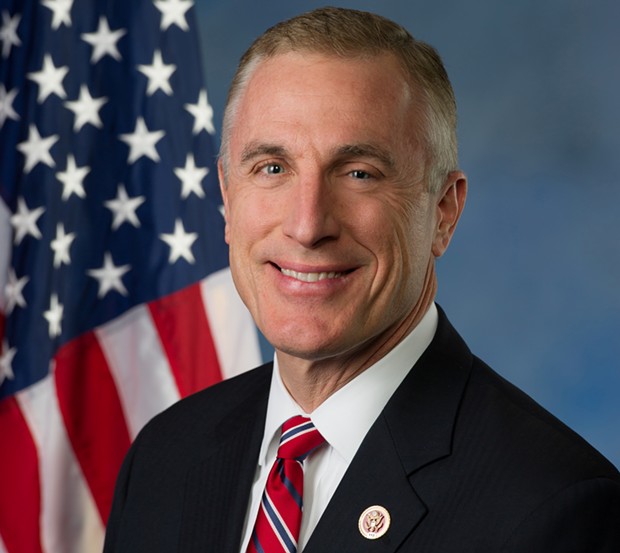 Tim Murphy
On the afternoon of Oct. 3, the Pittsburgh Post-Gazette broke a story of how Shannon Edwards, a Pittsburgh forensic psychologist and the admitted mistress of U.S. Rep. Tim Murphy (R-Upper St. Clair), alleged in a Facebook post that the congressmen urged her to get an abortion when the two had a pregnancy scare. Edwards appeared upset that Murphy's Facebook page was filled with pro-life messaging.

Murphy responded to Edwards' post in a text message, obtained by the PG, saying "I get what you say about my March for life messages. I've never written them. Staff does them. I read them and winced. I told staff don't write any more. I will."

And just two hours after this story broke, Murphy voted yes for a bill that would make it illegal for women to get abortions after they are pregnant for 20 weeks. The bill, HR 36, passed the U.S. House by a 237-189 margin. If it passes the Senate and is signed by President Donald Trump, the bill says that "a violator is subject to criminal penalties—a fine, up to five years in prison, or both." The Trump administration supports the bill and as said it "will help to facilitate a culture of life," according to the Huffington Post.

Exceptions to the 20-week rule include if the woman was a victim of rape or incest and if the abortion is necessary to save the mother's life.

Murphy's voting record aligns with his most recent vote to restrict women's abortion access. In 2015, he was given a 0 percent rating by the pro-choice organization National Abortion Rights Action League (NARAL). And for his 2014 congressional run, he was endorsed by the National Right to Life Committee, Inc., a pro-life group for his "100% pro-life voting record."

In fact, earlier this year Murphy supported HR 7, which would prohibit insurance companies from offering coverage for abortions. Murphy said in a statement in January after the bill passed the U.S. House: “I am so proud the House passed this important bill to clearly stand for the dignity and value of all human life, both the born and the unborn. Passage of H.R. 7 in the wake of the President’s executive action yesterday gives me great hope that moving forward, we will once again be a nation committed to honoring life from the moment of conception onward and ensuring American taxpayer dollars are never spent to end a life before it even begins.”

Sasha Bruce, Senior VP for Campaigns and Strategy of NARAL, said Murphy's vote on HR 36, and many of his other votes, is the "height of hypocrisy."

“I wish it were shocking to learn that yet another Republican congressman tried to cover up an affair by invoking the same abortion rights he tries to deny to others," wrote in an email to City Paper. "You shouldn’t have to be a member of Congress just to access your right to abortion. With his personal and public actions, Congressman Murphy has shown that he seeks to control women in every facet of his life, be it to cover up an affair or to deny all Americans the right to legal abortion."