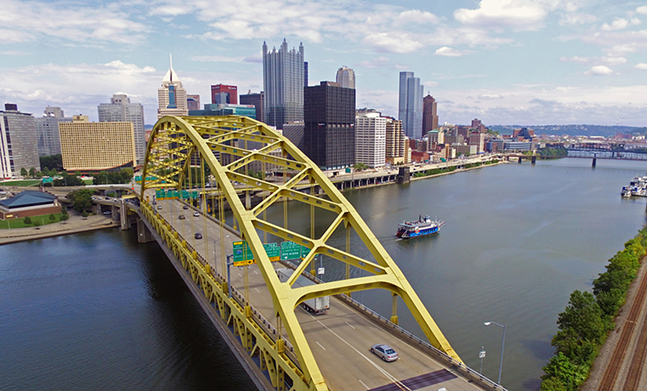 CP photo by Jake Mysliwczyk
Downtown Pittsburgh
With the announcement that tech giant Amazon is searching for a second headquarters, and the promise of more than 50,000 high-paying jobs, Pittsburgh started to salivate. Several media personalities, politicians and ordinary PIttsburghers took to social media and practically begged Amazon to consider the Steel City. Pittsburgh Mayor Bill Peduto announced that his staff was working with Allegheny County’s economic-development team on an application. Allegheny County Executive Rich Fitzgerald told TribLive that pitching Amazon is “right in our sweet spot.”

But economic factors and development realities in Pittsburgh indicate the region is far from Amazon’s sweet spot. Amazon’s list of preferences is intimidating. The tech company is first looking for a 500,000-square foot existing building that is close to a population center of more than 1 million people and near major highways. This will already be hard to find in Pittsburgh, as the city’s biggest building, the U.S. Steel Tower, only currently has about 300,000 square feet available.

With Amazon’s most preferred option most likely off the list, the second option would be a 100-acre pad-ready development site. Pittsburgh is filled with brownfields, old industrial sites the require clean up, and pad-ready sites are hard to come by. Especially ones that are “close to major arterial roads to provide optimal access,” as Amazon is demanding. Some have indicated the old Civic Arena site as a possibility, but that site is only 28 acres.

Additionally, the 500,000-square-foot site would just be the first part of Amazon’s development. Eventually, the company is looking to build a headquarters similar to its 8-million-square-foot Seattle headquarters.

The larger Almono site in Hazelwood has also been floated around as an option, but this site, while already in redevelopment, comes up short in Amazon’s requirement of having “direct access to rail, train, subway/metro, bus routes.” Currently, the Almono site does not connect to light-rail or even to one of the city’s three busways. Only three buses serve part or all of Almono — the 56, 57 and 58 — and they only arrive about every 20-30 minutes; hardly a vibrant public-transit hub. Not to mention the vision of Almono site is to house multiple companies, not one large one.

Chris Briem, an economist at University of Pittsburgh’s Center for Social and Urban Research, says this is out of scope for the Pittsburgh area. “Is there is site for them?” asks Briem. “Eight million square feet, I mean, that is like three U.S. Steel Towers. … Space has always been a terrible challenge for Pittsburgh.”

However, most regions can offer these, so Briem says further incentives will have to come from the state. Briem adds it will be difficult to convince the state to allocate money for incentives when it is currently struggling to pass a budget. Also, Briem points out that Pennsylvania has a history of offering large state subsidies to companies and getting burned.

Pennsylvania gave $70 million in incentives to Volkswagen to build a plant in Westmoreland County. It opened in 1978 and by 1988, it was closed. But, Pittsburgh does have advantages other places can’t offer. The region has some of the lowest housing costs in the country, and Pittsburgh is emerging as a world leader in robotics and artificial-intelligent technologies.

However, Pittsburgh probably doesn't have a large enough workforce, filled with highly-educated workers, to satisfy Amazon. The company is requesting filling an estimated 50,000 positions. Bloomberg columnist Conor Sen paints grim prospects for Pittsburgh. “Consider a place like Pittsburgh,” Sen wrote in a Sept. 7 Bloomberg article. “Its metro area is 2.35 million people, and its labor force is 1.2 million. But the size of its labor force hasn't grown in 25 years. Even with the talent [Pittsburgh’s] well-respected universities produce, [why] is Amazon, a company that thinks of growth in terms of decades, going to locate a headquarters in a place where it might have to hire over 4 percent of the metro area's labor force with uncertainty over whether that labor force will ever grow?”

And, unfortunately, the final nail in Pittsburgh’s Amazon coffin might be the Pittsburgh International Airport. The airport still lacks the international access that a hub like Atlanta, Chicago and even Philadelphia can offer. It also lacks a direct flight to Seattle, home of Amazon.

Well-known urban planning expert Richard Florida corresponded with Pittsburgh City Paper via Twitter about Pittsburgh's chances at getting Amazon. Florida, a former Carnegie Mellon University professor and Pittsburgh fanboy, indicated our airport may not be up to task.

“I adore Pittsburgh, but I put it more of a sleeper category along with, say, Nashville,” wrote Florida in a tweet to CP. “Great assets but lacking in global airport access.”

Politicians like Peduto and Fitzgerald shouldn’t be faulted for trying, as Amazon moving to Pittsburgh would be a game-changer and would potentially turn around Pittsburgh’s shrinking population problem. And Florida hinted in a tweet that Amazon should consider cities that might struggle to offer incentives like Pittsburgh or Detroit, because of the good the company could do.

“On the Amazon HQII decision: they should take the highroad, turn down any form of incentives & create a model of inclusive prosperity,” tweeted Florida on Sept. 7.

But in a world where large companies like Amazon control so much influence, Florida indicated that those companies are likely to pass over Pittsburgh for cities that makes more sense economically, and those tend to be regions that are already thriving.

“Exactly right. [Amazon] will go to established places that are already talent magnets,” tweeted Florida on Sept. 7. “The world is getting spikier.”

Face The Music with City Paper