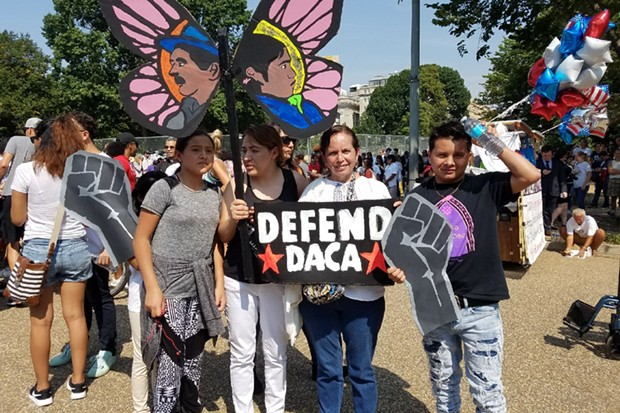 Photo courtesy of Monica Ruiz
Pittsburghers marching in Washington, D.C.
On Sept. 5, about 60 people took a bus from Pittsburgh to Washington, D.C., to protest President Donald Trump’s rollback of the Deferred Action for Childhood Arrivals (DACA). One of them was Monica Ruiz, an organizer with Latino-rights organization Casa San Jose.

In an interview with Pittsburgh City Paper on Sept. 6, Ruiz said it was an emotional day for the travelers, who were comprised primarily of Latino DACA recipients and their families and friends.

“It was very emotional, many were crying and their parents were crying,” said Ruiz. “For one parent, it was the first time she heard her son talk about his future and his dreams.”

Ruiz says the group of Pittsburghers marched from the White House to the U.S. Department of Justice Building, and even to Trump’s hotel, to tell the government that DACA recipients have rights and should be allowed to stay in the country.

And on Sept. 6, Pittsburgh DACA recipients got a boost here at home. About 75 people protested outside the Mount Lebanon office of U.S. Rep. Tim Murphy (R-Upper St. Clair) in support of DACA. Protesters were calling for Murphy to support the DREAM act, which would provide a path to citizenship for immigrants. “We want a clean DREAM Act, one that does not have any funding for a border wall attached,” said Erin Kramer of social-justice advocacy group One Pennsylvania.

CP photo by Ryan Deto
Dozens gather outside Tim Muprhy's Mount Lebanon office to protest Trump's DACA decision
Murphy released a statement on Sept. 5 saying he doesn’t “support deporting children who have no home but the United States and are here through no fault of their own.” But he agreed with Trump’s decision to end DACA and allow Congress to pass an immigration-reform bill. However, Murphy’s statement also offered a slight contradiction: He stated that he doesn’t support deporting DACA recipients, who entered the country illegally, but then said that immigrants who entered unlawfully should not be permitted to stay.

“Southwestern Pennsylvanians understand the desire of those wanting to come to America,” wrote Murphy in a statement. “Many of our grandparents and great-grandparents came here to find freedom and opportunity. But our forefathers also played by the rules. We can, and should, welcome those who choose to come to the U.S. legally, but those who have entered the country unlawfully should not be permitted to stay.”

At the Sept. 6 rally, Kramer said Murphy should take a “history class,” since many Europeans immigrated to the U.S. during a time of little to no immigration restrictions. In 1882, the U.S. enacted its first major immigration bill, the Chinese Exclusionary Act, which barred Chinese immigration. And up until the passage of the Immigration and Nationality Act of 1965, non-Northern European immigrants were either discouraged or barred from immigrating to the U.S. For many Northern Europeans, immigrating to the U.S. was as simple as buying a boat ticket and the standing in a line at Ellis Island in New York.

Nathaniel Yap, of Pittsburgh, attended the Mount Lebanon protest in hopes of reminding Republicans like Murphy that rescinding DACA would be bad for the economy. He held up a sign reading “thank immigrants and their kids for founding over 40 percent of the Fortune 500.” 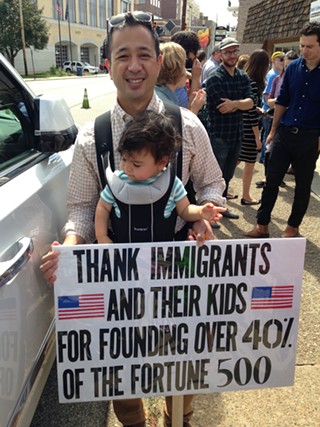 CP photo by Ryan Deto
Nathaniel Yap demonstrates in Mount Lebanon
“This administration isn't concerned with policies that show immigration is good,” said Yap. “They aren’t about having good business sense. They are about race and denigrating immigrants.”

Yap said his parents immigrated to the U.S. from the Philippines and that his entire family has contributed positively to the country, including his younger brother, who served in the Iraq war.

In addition to the South Hills protest, another demonstration took place in the North Hills. About 40 protesters rallied in front of the Ross office of U.S. Rep. Keith Rothfus (R-Sewickley). Rothfus, like Murphy, has supported Trump’s decision.

“The Trump Administration’s action to end this unconstitutional program restores the rule of law and allows Congress to reclaim its constitutional authority to set immigration policy,” wrote Rothfus in a Sept. 5 statement.

But the “rule of law” concerning DACA could be destined to see its day in court. On Sept. 6, Pennsylvania Attorney General Josh Shapiro, along with 14 other attorneys general, sued the Trump administration for its DACA repeal, claiming that rescinding the program violates the rule of law.

“I’m forced to act because of a failure of leadership, both by President Trump and by Congress to fix our broken immigration system,” said Shapiro in a video released by Pennsylvania Attorney General’s office.