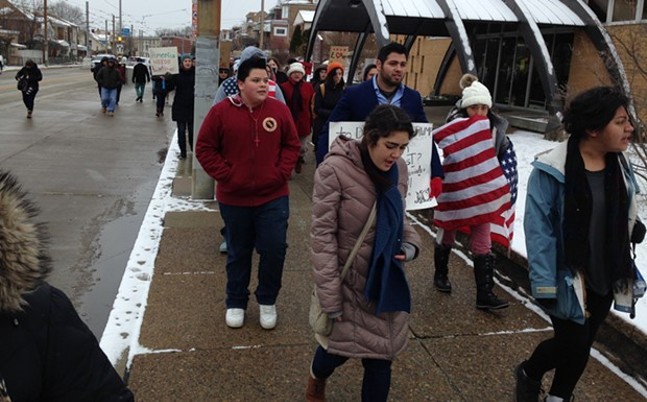 CP photo by Ryan Deto
Young Pittsburgh immigrants and Dreamers march in a protest in February
President Donald Trump has already rolled back several Obama-era rules in his short term, and the Deferred Action for Childhood Arrivals (DACA) program seems to be next on the chopping block. Several large media organizations have reported Trump will likely end the program that provides work visas and safety from deportation to undocumented immigrants who arrived in the U.S. as young children. Several Republican lawmakers have been requesting it for years. In fact, 10 Republican state attorneys general sent a letter to Trump requesting that he rescind DACA by Sept. 5, or they will challenge the order in court. (It should be noted that 20 Democrats and state attorneys general, including Pennsylvania AG Josh Shapiro, signed a letter to Trump in support of maintaining DACA.)

Because the survival of DACA is currently in the hands of Trump, many immigrants-rights activists and DACA recipients, or "Dreamers", are hoping U.S. Congress will act and pass legislation that will add immigrant protections. A Pittsburgh DACA recipient, Maria Duarte, told Pittsburgh City Paper in July the impending DACA decision is making her and other Dreamers uneasy, and she hopes there is a more empathetic way forward.

“As we continue to fight for DACA to stay, we must remember that DACA is not permanent protection, and therefore is vulnerable under any administration,” wrote Duarte to CP. “Although DACA affords us many privileges that we wish everyone in the undocumented community could posses, it still leaves us in a very susceptible position, that promotes anxiety, and makes everyday permanence feel fragile.”

Statewide social-justice advocacy group One Pennsylvania released a statement on Aug. 29 saying that four out of five registered voters believe Dreamers should be allowed to stay in the U.S. and that a majority of Americans, even some Trump voters, support a path to citizenship for undocumented immigrants. The group is calling on legislators to defend DACA.

“[DACA] has allowed young people across the country to emerge from the shadows and seek a better future and pursue the elusive American Dream,” reads the One Pennsylvania statement. “Revoking DACA would slam the door shut on that future for nearly a million young people - 21,000 in Pennsylvania alone.”

With Republicans holding the majority in both houses of Congress, and many championing anti-immigration stances, wide-ranging DACA support, not to mention comprehensive immigration reform, seems unlikely. But CP wanted to share how the region’s congressional representation feels about DACA and immigration, in case readers want to call them and try to change their minds.

Doyle has consistently been a strong Southwestern Pennsylvania political voice on the benefits of protecting and embracing immigrants. Doyle said that Martin Esquivel-Hernandez, an undocumented Mexican immigrant and immigration activist who was eventually deported despite only having two minor traffic violations on his record, was deserving of a path to citizenship. Doyle also told CP that any restrictions on immigration into Pittsburgh could negatively affect the region.

When asked about DACA, Doyle sent this statement to CP via email: “I wholeheartedly support DACA, which provides a compassionate, common sense response to the situation of young people who were brought to this country as children,” wrote Doyle. “These young people did nothing wrong, and they've become productive members of our society. It's unfair and cruel to deny them permission to work in the United States and subject them to the prospect of deportation from the only country many of them have ever known.”

Kelly has mostly stayed out of the immigration debate, but he ran on the platform that “securing the border” must come before comprehensive immigration. In 2015, he voted to defund DACA and voted for a bill that would have made DACA recipients ineligible for military service. (These provisions were eventually scrapped from the law, H.R. 240).

Kelly’s office did not respond to a request for comment.

Ironically, Trump is poised to use the same executive action to eliminate DACA. However, it's unclear how Murphy will react to Trump’s potential decision. Murphy's spokesperson Carly Atchison wrote an email to CP saying “Congressman Murphy will be prepared to weigh in if any action is actually taken on DACA.”

Rothfus has taken a larger role with immigration policy than earlier in his term, choosing to focus on increasing security at the U.S.-Mexico border. He has not made any public statements on whether he supports DACA, but like Murphy, has said that president Obama was overreaching when signing executive orders on immigration.

In 2015, he voted to defund DACA and bar DACA recipients from serving in the military. Rothfus’ office did not respond to a request for comment.

What happens when you use Trumpisms as search terms for stock art?