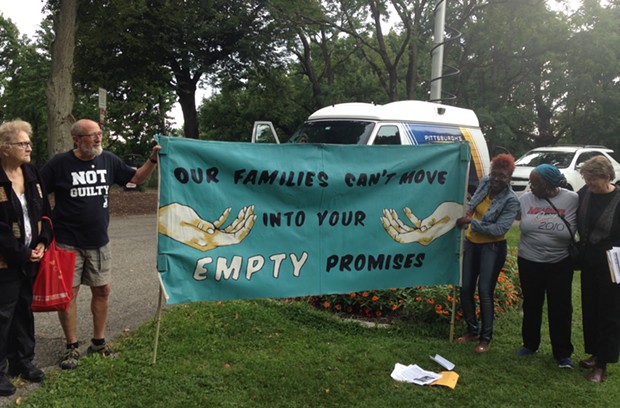 Yesterday, Stern and Duffy, along with a group of affordable-housing advocates from Homes for All and the Penn Plaza Support and Action Coalition, protested in front of a Democratic Committee picnic. They claim Pittsburgh Mayor Bill Peduto hasn't done enough for those displaced by the demolition of Penn Plaza and say the city should have done more to keep residents in the neighborhood.

Peduto rebuked this claim. "To say that the city didn't do enough is an insult," Peduto said to WESA on Aug. 24. "Even when we did [find new housing], they said no, and now they're holding protests saying we didn't do enough."

The city did sponsor an office within Penn Plaza when it was still standing to help residents find relocation housing. City officials also negotiated a deal with Penn Plaza owners, LG Realty, and Penn Plaza tenants that gave Penn Plaza residents between $800-$1,600 to help with move-out costs.

Gerhardt is asking Peduto and Pittsburgh City Council to consider inclusionary zoning, where developers set aside a percentage of affordable units, for new projects in hot-market neighborhoods like Lawrenceville and the Strip District. She's also asking the city to create ordinances that require developers that receive city subsidies to follow “build-first” rules that ensure residents aren’t displaced by new construction projects.

“Those that have lived in neighborhoods all their lives should be allowed to be part of their new growth,” said Gerhardt.

Peduto's office did not respond to a request for comment by press time. Pittsburgh City Paper will update the article when and if it does.

Gerhardt said Peduto has championed strong rhetoric on affordable-housing reform, but the city hasn’t enacted many new rules that actually address the city’s affordable-housing shortage. City council’s biggest affordable-housing push, the $10-million-a-year Housing Opportunity Fund, is still struggling to find enough support for its funding source. Councilors like Daniel Lavelle (D-Hill District) want Pittsburgh to raise its real-estate-transfer tax, a proposal Peduto supports, but others on council are less enthusiastic. The battle to get the Housing Opportunity Fund funded has been going on for more than a year.

Gerhardt says Peduto should be a stronger force in getting laws like these passed. “We expect him to follow through,” she said.

Pops and Botches Aug. 24: The Best and Worst from WWE TV this week