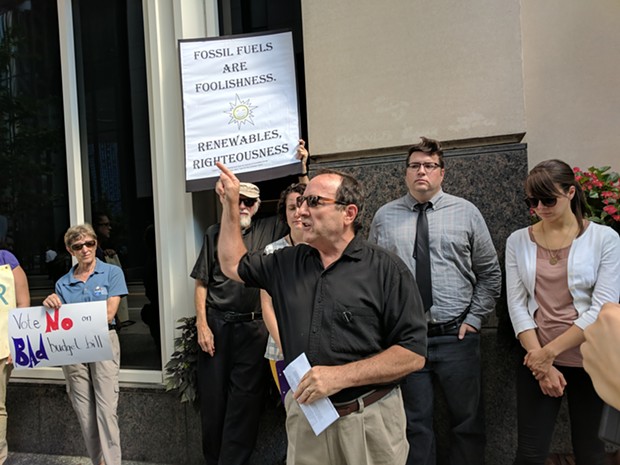 CP photo by Rebecca Addison
Former Pittsburgh City Councilor Doug Shields, of advocacy organization Food and Water Watch, at the rally outside Gov. Tom Wolf's Pittsburgh office
The end-of-summer, back-to-school season can be hectic for a lot of parents struggling to buy their children new backpacks, clothes and school supplies. But for parents like Patrice Tomcik, a field organizer with Mom’s Clean Air Force, there are additional worries as well.

"Every day I send my kids off to school, I'm exposing them to health and safety risks from the harmful pollution like methane and benzine from the oil and gas industry," said Tomcik, whose home and local school are in close proximity to natural-gas fracking operations and a compressor station. "I know that there are many other families and communities in Pennsylvania like mine who are being impacted by the natural-gas-industry pollution, and they need protection."

Tomcik was one of a dozen activists at a rally outside Pennsylvania Gov. Tom Wolf's office in Downtown Pittsburgh earlier today. There, the group called on Wolf to make good on campaign promises to control methane emissions from new oil and gas operations.

"I wish I were here celebrating today how great the new controls are on climate warming, methane and toxic volatile organic compounds, the major environmental initiatives that Gov. Wolf campaigned on and promised to implement years ago," said Jamin Bogi of the Group Against Smog and Pollution. "Instead, I'm discussing the exact opposite."

The group was also critical of provisions inserted into the state-budget revenue bills they say would weaken the Pennsylvania Department of Environment Protection’s ability to protect air and water quality. The proposed provisions would give permitting power to private companies, and create a committee that could overrule DEP officials on decisions such as air emissions.

"Gov. Wolf and the Pennsylvania legislature are trying to sell out public health and environmental protections in a bad budget deal," Tomcik said. "This bad budget deal threatens air and water protections by fast tracking oil and gas permits, cutting corners, and outsourcing the future of our environment to private companies. This is irresponsible behavior."

The new provisions are part of legislation approved by the Senate to balance the state’s $32 billion budget. In an email to Pittsburgh City Paper, spokesperson J.J. Abbott said the governor's office is still reviewing the full scope and impact of the proposed permitting changes.

"The Governor’s priority remains DEP fulfilling its mission of protecting Pennsylvania’s air, land and water from environmental impacts while also improving the permitting process," Abbott wrote. "We understand concerns of the natural-gas industry related to permit-process consistency, and even prior to this legislative effort by the Senate, directed DEP to focus on addressing those issues, while maintaining strong environmental standards.

"While this bill does not necessarily represent the governor’s preferred approach to permitting reform, he understands that improvements need to be made to the process and supports enacting a long-overdue tax on Marcellus Shale extraction."

While many activists support a severance tax on Marcellus Shale, which is expected to raise an additional $100 million in annual impact fees paid by natural-gas drillers, they worry it won't cancel out the dangerous health and environmental impacts of the industry.

"Ever since fracking has come to Pennsylvania, we have been under assault by the corporate interests who care about nothing but money," said Doug Shields a former Pittsburgh City Councilor currently working with advocacy organization Food and Water Watch.

Scientists have found that short-term exposure to chemicals expelled by the oil and gas industry can cause eye, nose and throat irritation; asthma attacks; increased risk of heart attack and heart disease; and acute bronchitis. Long-term exposure can lead to cancers, such as leukemia, as well as other chronic conditions.

Additionally, a study by John Hopkins associated maternal proximity to active fracking with premature birth and high-risk pregnancy. Another study from Columbia University reported an increase in hospitalizations for cardiac and respiratory issues near fracking operations.

"As a nurse, I recognize the connection between environmental health and the health of the people who live within that environment," said Laura Dagley, of Physicians for Social Responsibility. "Clean air and clean water are a vital part of keeping our communities safe and healthy. Pennsylvanians health is already at risk from natural-gas operations. Known air emissions from oil and gas drilling contain contaminants that have been proven to have short-term and long-term health effects, even at low levels of exposure." 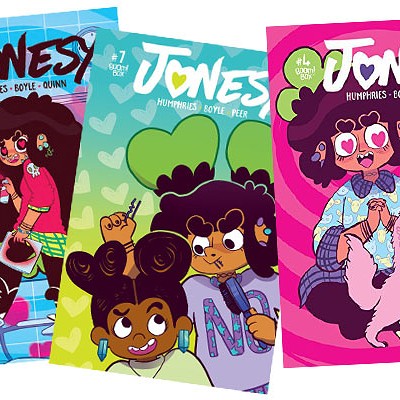