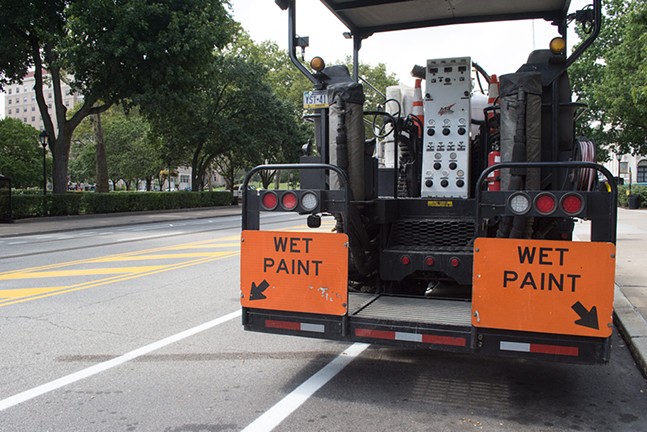 CP photo by Jake Mysliwczyk
New bike lanes being painted in Oakland
In 2015, when Pittsburgh’s Department of City Planning went out to count the number of cyclists on city roads, four Oakland intersections saw 124 cyclists pass by per hour. By this count, Oakland is the second most bike-trafficked neighborhood; only Downtown saw more cyclists.

But for years, Oakland had been without any substantial bike infrastructure. In 2014 and 2015, bike lanes were installed on Schenley Drive, Bayard Street and Bigelow Boulevard to meet the bike demand of neighborhood residents, including thousands of college students, but a key piece was still missing.

On Forbes Avenue (between Bigelow and Craig Street) and on Bigelow Boulevard (in between Fifth and and Forbes avenues), there was nothing but space for cars. But as of Aug. 18, that has all changed. Pittsburgh has installed bike lanes on these streets, including the city’s first counter-flow bike lane on Forbes, adding another piece to the bike-infrastructure puzzle in Oakland.

“These things have been building over time,” says Kristin Saunders, the city’s bike/pedestrian coordinator. “It is really filling in those gaps.”

With the Pennsylvania Department of Transportation's imminent construction of bike lanes on Forbes from Craig Street all the way into Squirrel Hill, Saunders says the cyclists will now have clear directions on how to navigate Oakland on bike infrastructure.

“It is a space where we need dedicated space for cyclists. It is the right application for this street,” says Saunders.

One of those new applications is unique to the city, but necessary since Oakland has many one-way streets for cars. Saunders says the counter-flow bike lane, which will run on the left side of Forbes Avenue from Bigelow to Bellefield, will be important to give cyclists safe passage through Oakland. But it will also help take cyclists off the sidewalk, where they are not legally allowed to ride, but often do because bike lanes were not present. The counter-flow lane will be marked by a double yellow line, and will transform that section of Forbes into a two-way street, but only for bikes. 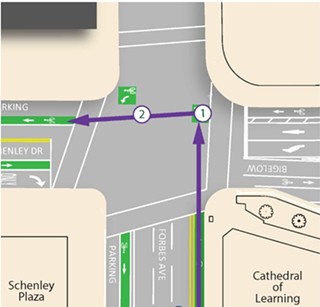 Image courtesy of Department of City Planning
An example of how cyclists should use a "Copenhagen" Left in Oakland.
Other new designs include bike boxes at heavily trafficked intersections that encourage riders to complete a "Copenhagen Left," a term used to describe when cyclists avoid left-turn lanes for cars and instead pass over the intersection in the right-hand lane, and then wait for an opposing green light to cross (see image). Saunders says there will also be a separate signal at some lights, so bikes don't have to cross the street at the same time as cars.

Saunders says city planning will be looking to educate the public on how to properly use the new bike infrastructure. She adds the new infrastructure will minimize conflicts between drivers and cyclists. In 2015, cyclist Susan Hicks was killed at the intersection of Forbes and Bigelow when a car crashed into a line of cars and Hicks, who was waiting to turn left onto Bigelow. The new bike infrastructure now gives cyclists an area to wait to cross over Forbes onto Bigelow that they did not have before.

The new Oakland lanes will surely have their critics (after all, two of this year’s mayoral candidates ran on anti-bike-lane messaging), who might say that not enough people bike in Oakland to deserve additional infrastructure.

But Saunders is confident demand is there and points out that criticism of bike lanes sometimes contains flawed logic. “[Oakland] streets are pretty unaccommodating right now for cyclists,” says Saunders. “If we build a system that’s not unaccommodating for cyclists, and then ask why there are no cyclists. That doesn’t really make sense.”

And below are some images of the newly installed bike lanes from our photo intern Jake Mysliwczyk.

"Sorry, I was thinking about love": A Night with Rozwell Kid, Chris Farren and Great Grandpa

At Roboto on Sunday, a F*ck Ted Nugent Extravaganza