Pittsburgh-area resident Hardy Lloyd has more than a decade of involvement with white-supremacist organizations and a history of violence. In the past, he has posted online an admiration for Adolf Hitler. According to the Southern Poverty Law Center, he bragged online about killing a woman, after a jury acquitted him of said murder.

And Lloyd seems to be back in Pittsburgh’s public sphere, apparently prompted by last week’s violence in Charlottesville, Va. On Aug. 14, just two days after the tragic events that unfolded in Charlottesville, a man who appears to be Lloyd was spotted and videotaped walking through the crowd of protesters that meets weekly in front of U.S. Rep. Tim Murphy’s (R-Upper St. Clair) office in Mount Lebanon. A participant in the protest, Mike Weis, sent the video to the Pittsburgh City Paper.

The man in the video taken during the Mount Lebanon protest bears a resemblance to pictures of Lloyd published in articles on the Southern Poverty Law Center’s website. The pictures of Lloyd show a man of stocky build with a long goatee and a shaved head.

In the video, as a woman is reading Murphy’s statement which condemned President Donald Trump’s claim that “many sides” were to blame for the violence in Charlottesville, the man who appears to be Lloyd walks through the crowd and shouts “white power.” He gives a Nazi salute, before exiting the crowd.

According to Mount Lebanon a resident who asked not to be named, who was at the Aug. 14 protest, the man was wearing a camouflage hat with a double lightning-bolt symbol. This symbol is sometimes referred to as “SS bolts” and is derived from the Schutzstaffel (SS) of Nazi Germany, according to the Anti-Defamation League’s website. The ADL says SS bolts are a common symbol in white-supremacist/neo-Nazi circles.

Photo courtesy of Mike Weis
A man who appears to be Hardy Lloyd
Two days before the Mount Lebanon protest, Heather Heyer was killed in Charlottesville, allegedly by James Fields, an Ohio man with ties to neo-Nazis. Trump has said counter-protesters, who were protesting the presence of white-supremacist groups in their town, were just as much, if not more, to blame for the violence. White supremacists like former Ku Klux Klan leader David Duke applauded the president, and white nationalist and neo-Nazi groups across the country are becoming more emboldened. According to CNBC, a few prominent white-supremacist groups are planning more demonstrations in the wake of Charllottesville.

And in Pittsburgh, at least one man with ties to white-supremacist groups, Lloyd, appears to be following that trend.

A few weeks after Trump’s election-day victory, a swastika was carved into the mulch of a playground at Washington Elementary School in Mount Lebanon, and someone painted the n-word on football equipment at Jefferson Middle School. After these incidents late last year, and the apparent spotting of a white supremacist in Mount Lebanon, the Mount Lebanon resident who spoke to CP is anxious. “When you see that as a mom or parent, then see some jackass walking by giving the Hitler salute, it scares you,” said the resident.

Bill Ankrom, a co-owner of Capital Real Estate Construction in Dormont, saw the screenshots of the video sent to CP of the man who appears to be Lloyd on Facebook, and instantly made a connection to Lloyd. CP corresponded via Facebook chat with Ankrom, who owns buildings in Dormont’s business district, where he said his tenants have had many encounters with Lloyd. Ankrom said that Lloyd used to live in a building in the northern section of Dormont’s business district. He has video of a man who appears to be Lloyd vandalizing his property, including gluing and damaging gate locks in the early morning hours.

“We have owned our building for a long time with no issues, until I rented to a friend that is mixed [race], then instantly started getting vandalized,” said Ankrom. “So it wasn't hard to figure out it was racist related.”

Ankrom believes the person in the video acquired by CP is Lloyd because many people he knows in Dormont who are familiar with Lloyd have told him it was Lloyd allegedly vandalizing Ankrom’s property in his videos. Ankrom informed the Dormont Police about the alleged vandalism last year, but he said the police never confirmed the man was Lloyd. Ankrom disagreed with the police.

“They know it was him, but the evidence wasn't strong enough to convict him,” said Ankrom. “Which is kind of ridiculous because we I.D.'d him for them from the video evidence we had."

The Dormont Police told CP they couldn’t comment since their press liaison was out of town until Aug. 21. CP also contacted Mount Lebanon Police, but didn’t receive a response as of press time.

Photo courtesy of Mike Weis
A man who appears to be Hardy Lloyd giving a Nazi salute
According to the Southern Poverty Law Center (SPLC), Lloyd was the former Pennsylvania head of the World Church of the Creator, an organization that believes “race, not religion, is the embodiment of absolute truth and that the white race is the highest expression of culture and civilization.” The SPLC also reports that in 2002 Lloyd began “referring to himself as ‘the doctor of all hate’ and promoting himself as the leader of the so-called ‘Order of National Socialism,’ whose motto was ‘Wake up and Kill Someone.’” In 2003, Lloyd was involuntarily committed to a psychiatric facility and kicked out of the World Church of the Creator.

In 2004, Lloyd was acquitted of a murder charge, even though he admitted to shooting and killing Lori Hann, a woman he met through online dating. The jury in that case “apparently believed that Lloyd reasonably assumed that Hann was armed,” according to SPLC. The SPLC also notes four years after the shooting, Lloyd posted a video online apparently taunting the Hann family by rapping a song titled “Bitch Killer” with the lyrics, “Bitch killer, better her than me, bitch killer, fuck Hann's family, bitch killer, I know Lori's family's grievin', bitch killer, but tonight I got even.”

U.S. District Court of Western Pennsylvania files of a criminal charge against Lloyd notes his mental state. Lloyd was convicted of Felony Possession of a Firearm in 2010, and a section of his sentencing memorandum reads: “Hardy Lloyd suffers from Asperger's Syndrome, part of the autism spectrum of behavioral disorders. As a consequence, he behaves socially as a teenager, and like most teenagers, does not appreciate that his conduct must have consequences.”

This memorandum also mentions Lloyd’s “apparent” membership in white-supremacy groups. In 2015, according to court documents, Lloyd was banned from using a computer or other device to access the internet as part of his supervisory release. (In July, Lloyd's supervisory release was amended, and he is now allowed to use a computer and access the internet, but he is "not permitted to use a computer, or other electronic communication .or data storage devices, including a cell phone, to access social networks, ... chatrooms, blogs, or to communicate with any individual or group for the purpose of promoting terrorism," according to court documents.  In 2010, Court documents state that Lloyd often posted “vile and despicable” words in forums and blogs online.

However, Lloyd appears to preaching hateful and racist ideology again, apparently through a proxy in a newly formed organization in Pittsburgh called Ben Klassen’s Church. (CP reached out to all the email contacts listed on the Ben Klassen’s Church website multiple times and received no response.) 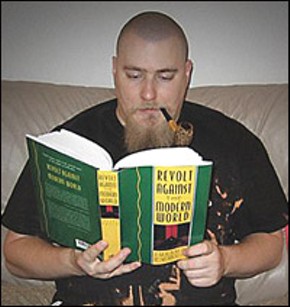 Photo courtesy of the Southern Poverty Law Center
Hardy Lloyd
Ben Klassen, now deceased, was a radical white separatist who founded the Church of the Creator and advocated for a “Racially Holy War,” commonly referred to as “RAHOWA” in white supremacist circles. (“RAHOWA” is listed at the end of many of the Ben Klassen’s Church website blog posts.)

According to a July 2016 post from the Ben Klassen’s Church website, one of the beliefs of the organization is that the “White Race is the highest virtue, and what is bad for the White Race is the ultimate sin.” The Ben Klassen’s Church website also lists “Hardy Lloyd” as the head of the church, or “Pontifex Maximus,” but the website appears to be managed by another party, a so-called “Brother Josef,” since Lloyd’s supervisory releases states he cannot use the internet. (Lloyd's supervisory release also prohibits him from owning firearms.) The website’s first blog post is dated May 14, 2016.

And even though Lloyd appeared to barred from internet use as a condition of his supervisory release, a post from July 2016 appears to be speaking as his behalf.

“Let me sum up my feelings: In 2007/08 I was so disgusted by the lack of effort in the North Amerikan section of White Pride that I started to give up,” the message from Lloyd reads. “That’s why I went all goofy and psycho for the last 7-8 years... But I see that the Movement needs a strong leader like myself.”

Another July 2016 Ben Klassen’s Church post indicates that the group’s desire to enter the public domain, but wishes to avoid criminal activity and violence. “We do not believe in silly acts of drunk violence or in petty vandalism. We are a productive people. We debate and discuss. We only use violence if we are forced to. No person will be allowed to suggest illegal acts during services, either. EVER!!”

Regardless, Dormont's Ankrom felt compelled to try to identify the man who appears to be Lloyd, given Lloyd’s ties to white-supremacist groups and Lloyd’s mental-health issues. “The last thing I want is something to happen, and me knowing who he is and what he is about and [not speaking up],” said Ankrom. “Also I don't want to get myself in any trouble bumping into him in my lot and having an altercation with a guy that is [suffering from a mental disability].”

Greg Heeb, a supervisory special agent at Pittsburgh’s Federal Bureau of Investigations field office, could not comment specifically on Lloyd. However, Heeb said generally that “if something becomes threatening behavior, we can and will take steps to look into it. We take threats to the public critically.”

Editor's note: The original version of this story listed the unnamed Mount Lebanon resident by name, but that source contacted CP after the story was published and requested the name be removed. The source told CP they had public safety concerns considering Lloyd's violent rhetoric and criminal history.

Editor's note: The original version of this story erroneously stated Lloyd is barred from using the internet. While Lloyd was barred in 2015, that prohibition was recently lifted. Lloyd can use the internet, but has restrictions, as noted in the story.