An NYC road trip to check out Progress UK wrestling 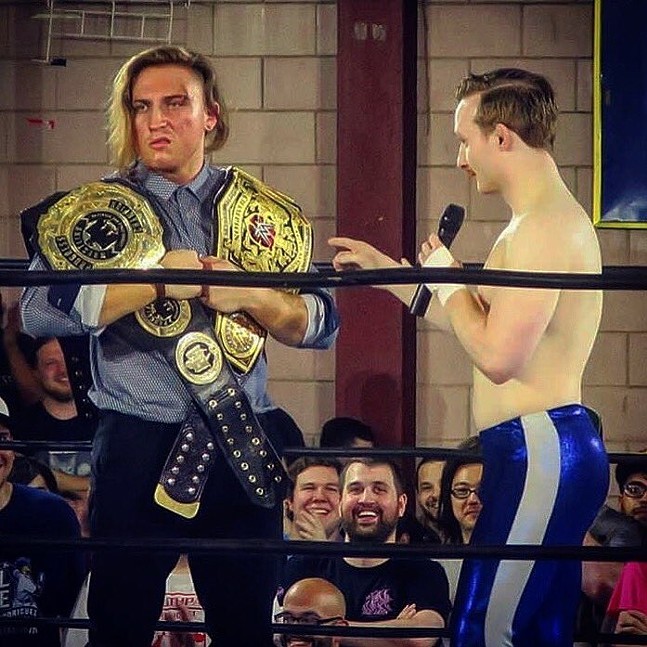 CP Photo by Meg Fair
Pete Dunne, left, and Jack Gallagher
Note from Meg: IF YOU ARE PLANNING ON WATCHING THIS ON DEMAND, THIS REVIEW IS FULL OF SPOILERS. SO MANY SPOILERS. TURN BACK IF YOU DON’T WANT ANYTHING SPOILED.

On a Saturday night in Queens, NY, more than 1,000 bodies jammed into a gym probably meant for a crowd of half that, to see a show from a little ol’ wrestling company from the UK. Progress Wrestling, founded in 2012, is a beautiful fusion of punk rock and professional wrestling. The strong-style, heavy production is, and you could have guessed by the name, more progressive than the average pro wrestling company.

Metallica’s “For Whom the Bell Tolls” burst from the speakers and the crowd erupted into cheers as Progress founder and ring announcer Jim Smallman made his way to the ring. You could tell that Smallman was absolutely floored by the intensity and vigor of the crowd. Before the show even started, the NYC merchandise had sold out and the crowd was already chanting “Please come back!”

Smallman laid down the main rule for the night and the Progress mantra and the crowd gleefully joined in: “Don’t be a dick!”

The night kicked off with a brilliant promo from heel extraordinaire and WWE UK Champion, Pete Dunne. Dunne was supposed to fight WWE 205 Live star and former Progress wrestler, Gentleman Jack Gallagher for the UK title. But, due to an injury that required 11 stitches the night before, Dunne was not cleared to compete. Dunne came out to jeers and boos as he claimed he owned WWE, Progress, and the entire city of NYC. (Dunne would later bend someone’s hand who was flipping him off.)

The sweet and perfect lad that is Gallagher came out to stop the champ’s ego, reminding Dunne that he hadn’t seen Dunne on TV last week (while Gallagher had been). It was teased that this was a match with a future possibility, to which the crowd popped immensely.

Of course Gallagher was still going to wrestle somebody, and who else would it be but Progress’ most hated wrestler, Zack Gibson. The whole deal is that we’re supposed to hate him because he’s from Liverpool. I don’t really understand why that’s the case, but the crowd did what it had to. You could barely hear a word Gibson said on that microphone because the boos from the crowd were so insanely loud. It was absolutely marvelous.

The two wrestled a fabulous match, of course, with huge cheers for Gallagher and nothin’ but hate for Gibson during his US debut.

The pacing in this match was absolutely marvelous, with all of these women playing up their heroics or villainy. It had me on the edge of my seat, desperately cheering for the good gals, but alas it was evil that triumphed here. That being said, it was still an absolutely moving match, and I can’t wait to see more from every single one of these women.

Jimmy Havoc vs. “Bad Boy” Joey Janela in a no DQ match was a highly anticipated event. The cinder blocks and chairs, doors and tables had been slid under the ring in preparation for what most assumed would be a match that included legal murder. The crowd was somewhat split, but the joyous chant of “Jimmy! Jimmy! Jimmy Fucking Havoc!” was absolutely beautiful.

I truly cannot express how stressed and into this match I was. Several times I screamed out loud in terror as the two absolutely laid waste to each other using all of the tools at their disposal. There were some really amazing spots too, like when Havoc set up Janela to get smashed into a chair off the corner and instead Janela landed sitting in the chair.


It was only after Janela was dropped onto some tacks (feet and manhood spots) that Havoc put him away. It was a brilliant no DQ match, probably my favorite to witness to date.

Not a no DQ match, but one that had me wincing nonetheless was the incredible showing between Matt Riddle (the Superking of Bros) and behemoth of a man Walter for the Atlas championship. By the end of the match both men’s chests were absolute RED from the insane slaps and chops delivered to each other. Ultimately it would be Riddle who vanquished Walter, but it was a super thrilling match in terms of pacing and intensity.

The four way between Mark Andrews, Austin Theory, Mark Haskins and surprise entrant Keith Lee was absolutely bonkers. Andrews high-flying actually had my jaw on the floor, and Keith Lee is so charismatic it should be illegal. Ultimately it was Haskins who ended up on top, but these four men really brought it.


The matchup of returning South Pacific Power Trip (TK and Travis) vs. British Strong Style (Tyler Bate and Trent Seven) was very hyped up, as BSS are some of the most talented and tantalizing heels in the business and SPPT are loveable, high-energy faces who were in the midst of a very recent comeback from industry.

The match started off fun with elements of comedy and banter in the mix, but quickly got very serious as SPPT member TK jumped off the corner of the ring and landed on BSS. Unfortunately he came down hard and wrong, and dislocated his ankle.

The match was immediately called off as the folks at Progress took care of the situation—it was really sobering. It’s not often that we’re reminded how much our favorite wrestlers put their body on the line for us, and when we see accidents happen it is absolutely devastating.

Travis Scott, TK’s partner, hopped on the mic after TK had been carried out to challenge Tyler Bate and Trent Seven in a handicap match to avenge TK. The handicap match ruled, and the crowd was so emotionally invested in the success of Scott after seeing a fan-favorite injured. When Scott ended up on top, the whole crowd was deafening in its applause and cheers.

There were so many really beautiful moments at Progress NYC that showed what the pro wrestling community has to offer as place of friendship and support.

Before the second half of the show, Smallman turned the mic over to Mike, who had driven to the show from Florida with his girlfriend Cat, so that he could propose to her. That pop from the crowd when he proposed and she said yes had several folks in my row crying happy tears and on their feet cheering. Even though the room was full of a thousand strangers, that moment especially made it clear that everyone in that room was family.

Additionally, whenever TK injured his ankle and the match was called, the crowd was so quiet and patient and respectful. It was really refreshing to see decent human behaviour reign as the organizers chased down a doctor to help get TK out of the area and taken care of. Although his injury appeared to be pretty gnarly, the angelic TK was literally fist-bumping people as he was carried away. His love for the crowd was tangible as was our love for him.

Progress Wrestling has created an incredible environment of inclusivity and mutual support with a roster of incredibly humble and kind wrestlers, the kind of folks who don’t really need to run their own merch booths but do so with grace and patience and endless gratitude for every person who walks up to their table after not only wrestling for us but also jumping to the aid of people who were passing out in the sweaty gymnasium.

Given the fire code smashing and general insanity of the night, I highly doubt that Elmcor Youth and Adult Activities’ Center in Queens will ever host Progress again, but I certainly hope to see those lads on the East Coast sooner rather than later.