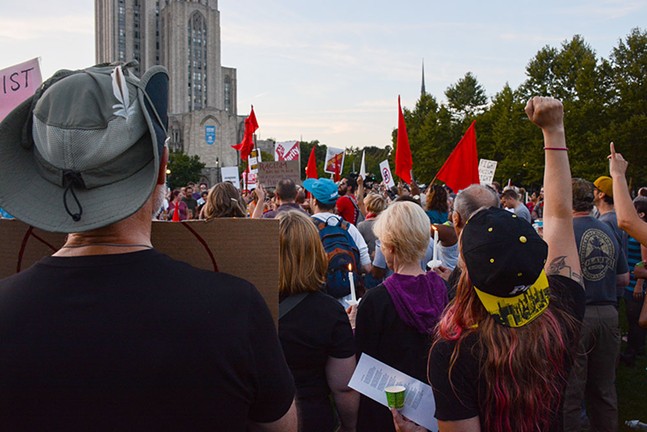 CP photo by Stephen Caruso
The crowd sang the 19th century socialist anthem “The Red Flag” to the tune of “O Christmas Tree” during a candlelight vigil in Schenley Plaza on Sun., Aug. 13.
Oakland's Schenley Plaza filled with waving red flags and determined speakers as some 700 Pittsburghers showed up for an impromptu rally and candlelight vigil in response to violence this past weekend in Charlottesville, Va.

The vigil was held to remember Heather Heyer, who died when a man drove his car into a crowd of counter-protesters gathered to oppose a white supremacist rally. Hate groups, including white nationalists and neo-Nazis, gathered in the Virginia college town to protest the removal of Confederate statues, including one of Gen. Robert E. Lee. 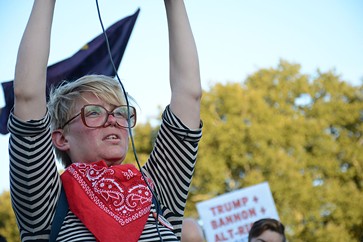 CP photo by Stephen Caruso
Emily Fear, a DSA member, holds up a speaker to help others hear during the vigil Sunday night.
Pittsburgh’s chapter of the Democratic Socialists of America organized the event to show the city’s own opposition to white supremacy, according to Arielle Cohen, co-chair of the local chapter.

Just a week earlier, Cohen noted, she had been hanging out with some DSA members who this past Saturday night were right near the site where the silver Dodge Challenger plowed into the march, killing one and injuring 19. Immediately, Cohen started checking every media outlet she could for updates.

Last night's rally was an attempt to push back against oppression and hate. Sitting in a folding chair, scribbling “Love Trumps Hate” on a manila envelope for her sign, was Vikki Hanchin. The Swissvale resident has lived in the Pittsburgh area for 35 years. A Women’s March veteran, she came to the rally as a way to show togetherness and community after the clashes in Charlottesville. 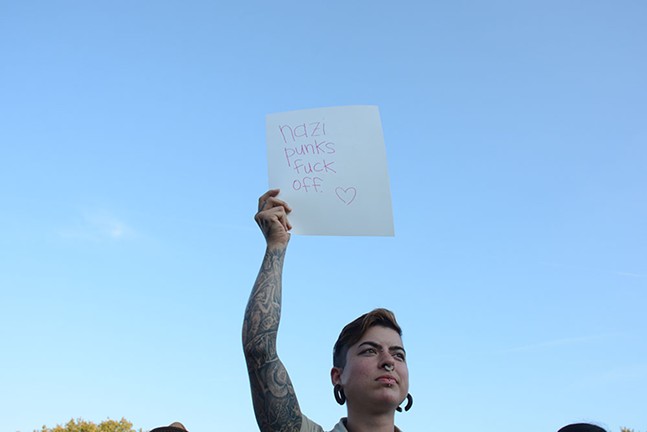 CP photo by Stephen Caruso
Dani Erdos-Kramer holds her sign up high during the rally Sunday night at Schenley Plaza in Oakland. “I’m just feeling it in my heart,” she said of her sign.
While Hanchin thinks that President Donald Trump’s rhetoric has stoked the racial anger present in Charlottesville, she says that rallies like Sunday evenings were a chance to have his words boomerang and create community.

“[Trump] creates more solidarity as he goes along,” Hanchin said.

Immediately following the incident, Trump refused to specifically condemn the hate groups in attendance, instead chastising the violence from "many sides." His failure to specifically mention these groups has earned him harsh rebukes from many, including members of his own party.

On the flipside, Trump has gained praise from and more credibility with white supremacist organizations.

Last night, local activists traded the microphone for an hour to share their thoughts. Tim Stevens, chairman and CEO of the Black Political Empowerment Project, recalled that torch-bearing mobs of white supremacists marched in the 1930s. Yet he’s shocked to witness the hundreds-strong march by hate groups in Charlottesville.

The assorted activists agreed throughout their speeches that action was necessary — whether it be “punching Nazis” or simply sharing a book with someone trying to make sense of the world.

CP photo by Stephen Caruso
Two vigil goers share a light as the assembled Pittsburghers prepared for a moment of silence in light of Heather Heyer’s death.
Activists preached on labor, LGBT and African-American rights among others issues. Jared Mcray, a former UPMC worker who now organizes hospital workers for labor union SEIU. Looking out on the mostly white crowd, he was happy to see engaged faces.

“One of the best things white people could do is show up,” McCray said.

Before leaving, the crowd lit candles and had a moment of silence for the slain Heyer, whom rally organizers said did organizing work with the International Workers of the World. In a last show of solidarity, attendees cleared their voices and sang “The Red Flag,” a 19th century socialist anthem, before dispersing.

Looking over the crowd, Alisa Grishman, a local disability-rights activist, thought the gathering was a natural response for a lot of vulnerable people looking for an emotional outlet.