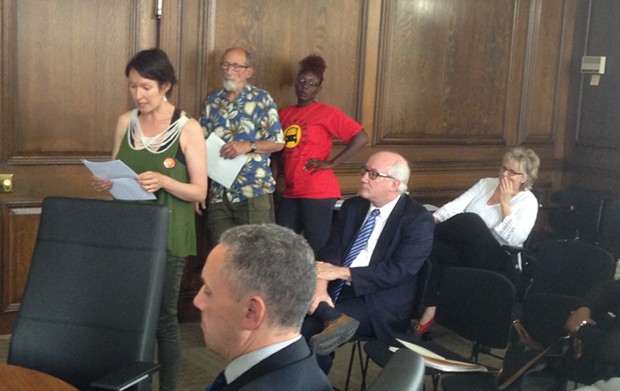 Lexington is a 16-acre, city-owned site that has housed government and other offices for years. But with many of those offices moving out, the URA will soon release a Request for Proposal (RFP) for the property to facilitate its redevelopment. Lexington is located less than 200 yards from the Homewood station of the East Busway, which provides frequent and fast  bus access to Downtown, Oakland, the East End and beyond.

“People are being priced out of this neighborhood,” said North Point Breeze resident Craig Stevens at the URA meeting. “We are concerned that Lexington should have the maximum number of affordable housing units possible. And hopefully bring in some local businesses.”

During the July 13 URA meeting, the board was set to vote on authorizing an RFP for the Lexington site, but delayed the vote after concerns were raised. Some of the advocates at the August meeting accused the URA of rushing the process, but Kevin Acklin, Pittsburgh Mayor Bill Peduto’s chief of staff and URA chair, defended the authority and said a public process for the Lexington development is going to happen.

“We are going to a have a community meeting,” said Acklin at the August meeting. “I can assure that this will be a full public process.”

State Rep. Ed Gainey (D-East Liberty), who also sits on the URA board, added that discussions about the new development including affordable housing occurred last month.

But Laura Wiens, of transit-advocacy group Pittsburghers for Public Transit, wants some affordable-housing requirements attached to the RFP for the Lexington site. She says failing to include affordable housing on the site would be a missed opportunity to help low-income residents.

“Publicly held land should benefit the public first,” said Wiens at the meeting.

At the meeting, Wiens cited a URA study of the Homewood station as additional reasons why affordable housing should be included (the Lexington site sits within the half-mile radius which the study examined). The 2014 Homewood Station Transit Oriented Development Study states:

“TOD should expand housing choices and opportunities encouraging and allowing more people to ride transit. New housing should accommodate a variety of household types at a range of price points, including long-term strategies for including and maintaining affordable housing options. Complementary public uses, jobs, retail and services should be located in close proximity.”

On the other side of the East Busway, a few hundred yards from the Lexington site, a development was recently completed that includes affordable-senior housing, storefronts and a community-run coffee shop.

Crystal Jennings, also with PPT and a former resident of affordable housing complex Penn Plaza, spoke at the meeting and also asked the city to take concrete action to include affordability at Lexington.

“The city has talked about affordable housing and access to transportation, but here is the chance to actually prove it,” said Jennings.

And the push to include affordable housing at Lexington is growing. After the meeting, where eight people spoke in support, The Black Political Empowerment Project sent an Aug. 11 letter to Acklin and the URA asking for "an extremely transparent process" in Lexington's RFP process and requesting that the authority should strongly consider housing that is available to residents of any income.

"Affordable housing needs to be not a nice sounding statement, but instead a fully embraced position by the Urban Redevelopment Authority," wrote B-PEP CEO Tim Stevens in the letter.

URA board member and former state senator Jim Ferlo said the URA has always stood for the creation of housing for low- and middle-income families, and is not ruling out the possibility of finding a developer who will include affordable housing and spaces for small, local businesses on site.

A time and a place for a community meeting for the Lexington Technology Center redevelopment has not yet been scheduled.