Art of the Dill: Picklesburgh returns for a third year, with music, vendors and lots of pickles | Blogh 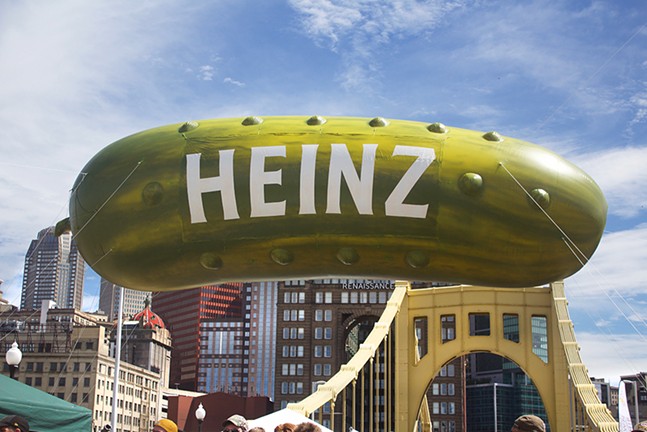 CP photo by Krista Johnson
Pittsburghers once again celebrated their love affair with food, drinks and music last weekend during the third annual Picklesburgh. The Roberto Clemente Bridge was closed July 28-29 and lined with local briners, bartenders and bands who entertained hundreds in the shadow of a giant Heinz Pickle balloon.

The event was produced by the Pittsburgh Downtown Partnership. Jeremy Waldrup, PDP's CEO and president, said the event took nearly 200 days of planning.

“We were previously located on 9th Street Bridge but decided to move here since it’s a nostalgic location for Pittsburgh and their Pirates Games,” Waldrup said.

CP photo by Krista Johnson
“We knew we wanted to do some sort of food festival to bring people downtown,” Waldrup said. “We talked with Heinz and decided on Picklesburgh as our theme.”

The event could be seen from afar, under that giant Heinz pickle balloon, custom-built by the creative balloon-geniuses behind floats in the Macy’s Thanksgiving Day parade. 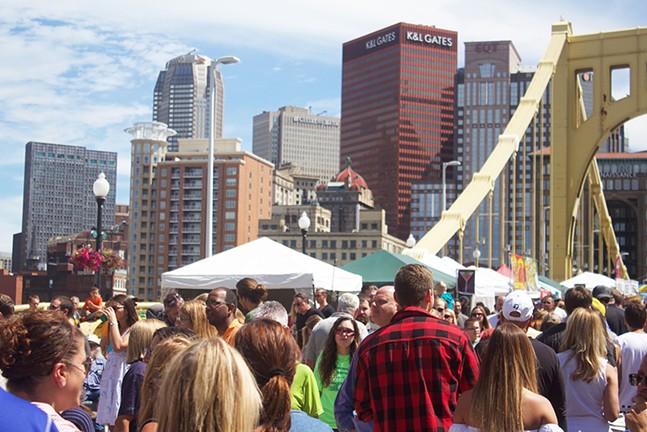 CP photo by Krista Johnson
A stage was set up on the north end of the bridge where 14 bands performed, including Steel Town Horns, Two Tall Twins, Lone Pine String Band, Nevada Color, Buffalo Rose, and Jack Swing.
A pickle-juice-drinking contest was one of the most anticipated events of the weekend. Contestants were timed as they chugged down 32 ounces of juice in front of cheering crowds.

Nearly 300 people packed onto the bridge at the start of the festival, on Friday, and crowds grew as the weekend progressed. Humidity and a high chance of rain could not keep Pittsburghers away from their beloved pickles.