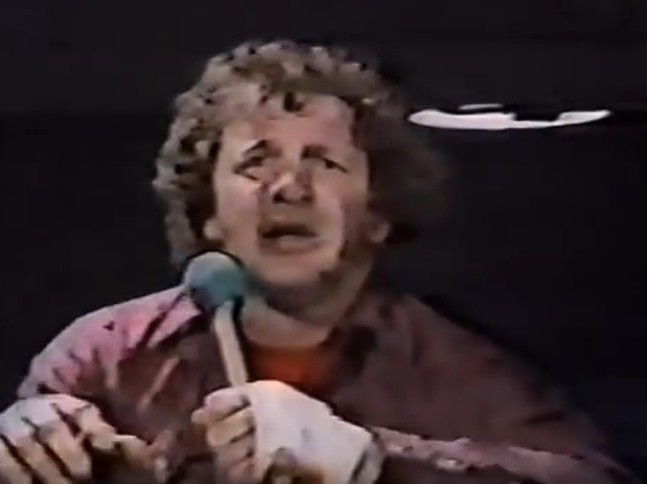 Terry Funk
Throughout the history of professional wrestling, what a performer can do on the mic is often just as important as what they do in the ring. Each afternoon, Smark Attack will highlight a wrestling promo that shows off the best, and sometimes the worst, in pro wrestling microphone work.

Fans of the WWE's Attitude Era know Terry Funk as a man in his 60s who took massive bumps and was the King of Hardcore Wrestling. In other words, Terry Funk was a bad motherfucker. Young Terry Funk was even more so. His mic work seemed to involve off-the-top-of-the-head riffs. So, I knew I'd be profiling a Terry Funk interview today and then I ended up going down a rabbit hole of Funk promos and matches.

I came across a 1980s obscenity-laced tirade by Funk from his days feuding with Jerry "The King" Lawler in Memphis Championship wrestling. Apparently, Funk Challenged Lawler to a fight at 1 p.m. in an empty arena. In the first clip, you'll see the King was late and Funk had "heard enough shit" about how good Lawler was.


Eventually, Lawler showed up and the match commenced. The beginning of this clip is an edited version of the above interview. The match starts at roughly the seven-minute mark. There are so many things to love here, including Funk selling (maybe overselling) an eye injury.

I'd never heard of this match until today. Back in the early 1980s, Wrestling was built on a regional promotion system and unless you lived in that region, you never saw it. Then, this match led me to the final clip. An empty-arena cage match from the CWF (Championship Wrestling from Florida) between Funk and a jobber named Bruce Walkup. I'm not sure why the match took place becasue FUnk was clearly wanting to fight Dusty Rhodes. This was a total squash match, but it piqued my interest in who exactly Bruce Walkup was. I'm still on the trail, but I did find his obituary from last year. Seems like he looked back fondly on his wrestling days. I'll continue this search in the coming weeks.

Smark Attack Pro Wrestling Promo of the Day: John Zandig wants you to "Fix Him!" immediately