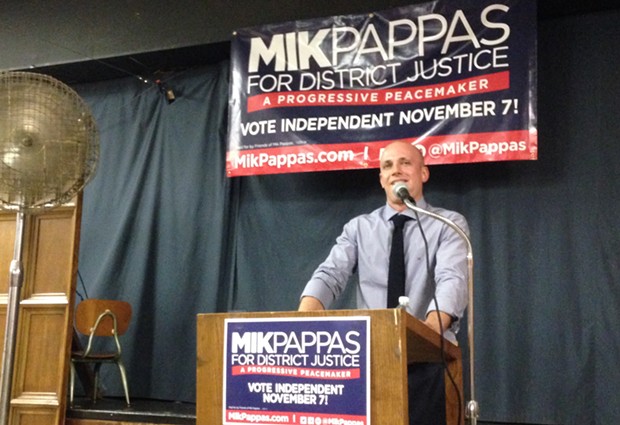 “That couldn’t be anything farther from the truth,” says Pappas. “This is an immensely important office. No public elected official sees and interacts with everyday folks on a daily basis more than a district justice. You can’t overstate the importance of this office.”

Pappas, a Highland Park resident who was raised in East Liberty, kicked off his campaign in front of a packed house inside East Liberty Lutheran Church on July 13. He told the crowd of more than 120 that he seeks to reform the way a judge can work within the justice system for the betterment of those most affected by the system: poor and minority residents of Pittsburgh. His platform includes increasing access to affordable housing and legal services, disrupting the school-to-prison pipeline and working to lower problems associated with mass incarceration.

Pappas says these reforms could help vulnerable populations, and could also save taxpayers money by keeping cases out of the justice system that aren’t serious enough to be there. “Judges also have a lot of discretion on how they manage cases,” says Pappas. “ I want to save taxpayers money and take on cases that should be in the system, and not ones that shouldn’t.” He says district judges should be questioning how they decide eviction and truancy decisions, as well as sentencing to drug addicts. Pappas says that too often harsh punishments are doled out on cases like these and that community stability should be considered more.

While he understands that district judges also serve as peacemakers in minor disputes like ones described in the Post-Gazette article, Pappas thinks judges can do even more to interact with the community.

“I would find a way to be involved while still following the judicial code of ethics and maintaining independence,” says Pappas. “But we need to still be very involved in the community. I think that is what people want and restoring faith in the justice system requires at this point.”

The 2017 general election will be held on November 7 and the last day to register to vote is October 10.

Breaking down the weirdness of the Pittsburgh Bucket-List story