Furries return to Pittsburgh for Anthrocon 2017 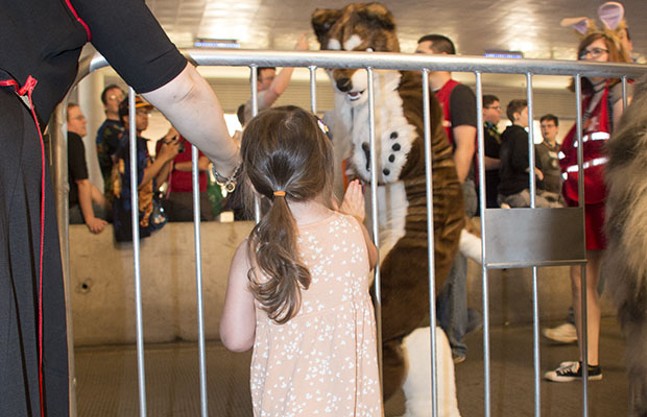 CP photos by Jordan Miller
A child waves at a furry during Anthrocon's annual Fursuit Parade on Sat., July 1, 2017.
Anthrocon, voted Best Local Annual Convention in last year's Pittsburgh City Paper Readers' Poll, returned to town this weekend, bringing Pittsburghers from all over the city to Downtown in hopes of getting selfies with furries, folks who dress as anthropomorphic animals.

Photo intern Jordan Miller was on the scene at the David L. Lawrence Convention Center on Saturday afternoon, capturing furries posing for photos with both kids and adults. And yes, we made Jordan send us a selfie of herself too. (That's her in the last photo below!)

There's still time to join in the fun if you still haven't made it Downtown. The convention continues through today, with closing ceremonies at 5:30 p.m.