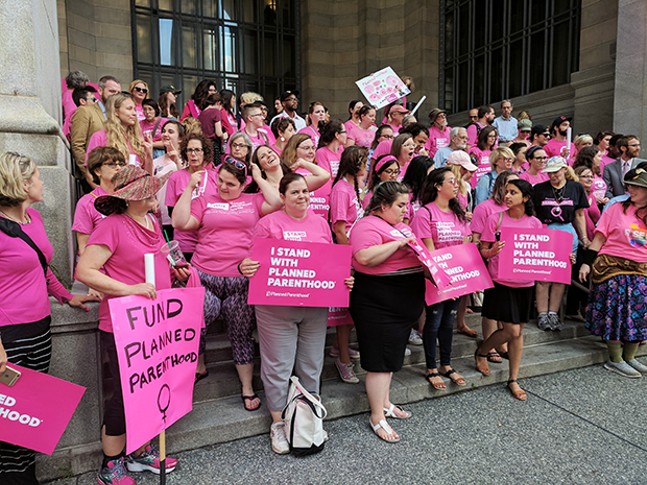 CP photo by Rebecca Addison
"Pink Out" rally at the City-County Building Downtown
Earlier today, Senate Republican leaders released a draft of the long-awaited health-care bill to repeal and replace the Affordable Care Act. Along with cuts to the country's Medicaid program, which helps low-income, elderly and disabled Americans, the bill would defund health-care organization Planned Parenthood for one year.

The mission of yesterday's "Pink Out" rally was to send a message to elected officials that Planned Parenthood advocates, supporters and volunteers are united in the fight to keep Planned Parenthood’s doors open. The draft of the legislation revealed today would prohibit Planned Parenthood from receiving Medicaid reimbursements for providing services like contraception and cancer screenings to low-income patients, which would hurt the organization financially.

"We're here to say, no decision will be made for us, without us," said Jessica Semler, public-affairs director of Planned Parenthood of Western Pennsylvania. "We are not going to sit back and watch health care be taken away from us."

Many have been critical of the group of 13 Republican senators, among them Pennsylvania Sen. Pat Toomey, charged with drafting the legislation to replace the Affordable Care Act. All 13 are men, and until today, the process has been shrouded in secrecy.

"Pennsylvanians stand for supporting women and stand for supporting Planned Parenthood," said Allegheny County Controller Chelsa Wagner at yesterday's rally. "Under the Affordable Care Act, women are no longer paying up to 150 percent more for health insurance just because they are women. We're all here today to tell the unlucky 13, and especially Sen. Toomey, that we will not go back."

"One in 5, and every single one of them has a story to tell," said Gina DeAngelo, who went to Planned Parenthood after she discovered a lump in her breast. "If it wasn't for Planned Parenthood, I would've been afraid to get the care I needed. No one should have to struggle from meeting their basic health-care needs."