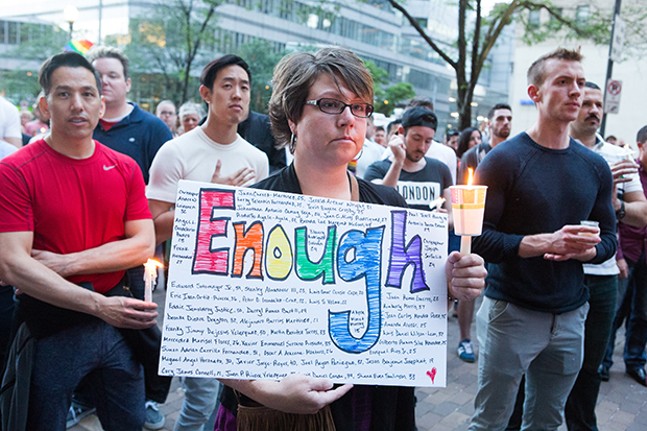 CP photo by John Colombo
June 13, 2016, vigil in Pittsburgh for victims of the mass shooting at Pulse Nightclub in Orlando, Fla.
This weekend, thousands will descend on Downtown Pittsburgh to show support for the LGBTQ community. The Pride Week events, held every year around this time, are meant to serve as a call for equal rights for LGBTQ individuals and a celebration of the LGBTQ community.

But unfortunately, while cities around the country hold similar Pride events, the LGBTQ community and all Americans must also remember the June 12 mass shooting last year at Pulse Nightclub in Orlando, Fla., a gay dance club where 49 people were killed.

The shooter in the June 12 massacre was Omar Mateen. While the mass shooting was originally characterized as an act of religious extremism, Mateen’s father told reporters he believed homophobia, not religion, motivated his son.

In an effort to ensure incidents like this don't don't continue to happen, this week, several U.S. senators including Pennsylvania Sen. Bob Casey introduced legislation to prevent firearms from getting into the hands of people who have committed hate crimes.

"I think Sen. Casey's legislation is a great first step toward ensuring the safety of some of our most vulnerable citizens," says Rob Conroy, director of organizing with CeaseFirePa, a local nonprofit working to fight gun violence, "and ensuring guns stay out of the hands of people determined to harm certain classes of people. I applaud the senator for introducing this legislation."

Last year, just days after the June 12 shooting, the Republican-controlled U.S. Senate rejected four gun-control measures inspired by the mass shooting and others like it. The measures would have barred individuals on watch lists from buying guns and increased mental-health checks on purchasers.

The Disarm Hate Act, first introduced last year along with the other gun-control measures, would prevent individuals convicted of violent misdemeanor hate crimes from purchasing or possessing firearms.

“If you’ve been convicted of a crime based on hate, you should have zero access to a gun. It’s not complicated,” Sen. Casey said in a statement. “It is time for Congress to step up to the horrors of gun violence. If we care about the safety and security of our communities, it’s imperative that we put measures in place to keep guns out of the wrong hands.”

Next week also marks the anniversary of the mass shooting at Emanuel African Methodist Episcopal Church in Charleston, S.C. in 2015. Shooter Dylan Roof, who killed nine people, was a self-professed white supremacist.

And activists emphasize these aren't isolated incidents. According to The National Crime Victimization Survey, between 2010 and 2014, approximately 43,000 hate crimes involving the use of a firearm occurred in the United States .

"It's disheartening to watch anyone get shot for any reason," Conroy says, "but to be targeted arbitrarily for things outside of their control is particularly offensive and egregious, and absolutely needs to be addressed legislatively and by society."

California is currently considering legislation similar to the federal Disarm Hate Act. The bill, that passed the Assembly last month, would prevent people convicted of hate-crime misdemeanors from accessing lethal weapons within 10 years of conviction, unless they can successfully demonstrate to a court that they are not a threat to public safety.