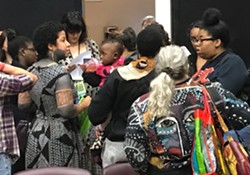 CP Photo by Bill O'Driscoll
Post-forum discussion at the Trust Arts Education Center
About 80 attended the often-fiery discussion, which was sparked by controversy over “Within Two Seconds, The Shooting of Tamir Rice,” a painting by white, Cleveland-based artist Tom Megalis that was chosen for exhibition at the Dollar Bank Three Rivers Arts Festival. The painting depicts the 2014 police killing of a 12-year-old African-American boy in Cleveland. Twelve days before the exhibit opened, Megalis publicized the painting’s inclusion on his Facebook page; a social-media firestorm ensued, and Megalis withdrew the work.

Last night’s forum was organized by the Pittsburgh Cultural Trust, which runs the arts festival. Megalis was invited to attend but declined. The event was moderated by art historian Kilolo Luckett, who began by saying, “This isn’t about yes or no. … I’m really interested in the space in between.”

But such space was sometimes difficult to find at the Trust Arts Education Center. Most who spoke condemned the painting, saying it was an example of a white artist exploiting black pain.

Felicia Williams, of Homestead, said that only black people have the right to depict black pain. “Nobody else but black people are in pain when they hear that another innocent black person has been shot, and [that] nothing’s going to happen,” she said.

“It’s a matter of respect,” said Aubrayia Dowdy. “There was nothing OK about that painting.”

Megalis said he painted “Within Two Seconds” out of a sense of outrage over the injustice of Rice’s killing, and a grand jury’s failure to indict the two police officers who shot him. The 8-foot-long painting was one of about 50 works selected for the festival’s Juried Visual Arts Exhibition by three jurors, who were also invited to attend, along with exhibit organizer Ivette Spradlin.

At the start of last night’s forum, Cultural Trust spokesperson Sarah Aziz said that Spradlin and juror Lenore Thomas planned to attend but were stuck in traffic. However, the two never spoke at the event. Juror Lee Parker, who was out of town, sent a message, read by Aziz, that supported free expression and added, “I am proud of the selections.” (A few days after withdrawing the painting, Megalis, saying he had begun hearing more words of support for “Within Two Seconds,” had sought to reinstate it in the exhibit, but was told it was too late.)

Dowdy, who works with a group called the Sistah Speak! Youth Project but spoke as an individual, was among those who criticized Megalis on his initial Facebook post about the painting. (The post has since been removed.) Critics asked Megalis whether he had reached out to Samaria Rice, the mother of Tamir Rice. “He told us he did not have to talk to Samaria Rice,” said Dowdy, who called Megalis “a disrespectful white man. … He says he feels all this pain. Why doesn’t he get out on the street with us?”

Only a couple of speakers last night spoke in support of Megalis. Betty Douglas, an African-American artist and art historian, said artists depend on free expression. “As human beings and as artists, we think about those things we have the passion the the desire to explore,” she said. Of Megalis, she said, “He could be a simple human being who is responding to pain and to injustice in the world.”

Graham Shearing, an art critic and curator, cautioned the painting's critics. “You’re trying to define a new form of obscenity,” he said. “The history of obscenity has been very problematic, and I would ask you to reflect on that.”

[Addendum to original post: Many critics of the painting's original selection also cited the fact that none of the three jurors for the exhibit was black. Aziz said that while festival juried shows in the past have always had three jurors, the Trust would consider expanding that number to five to ensure a more diverse pool of jurors.]

Some criticism of “Within Two Seconds” has referenced cultural appropriation, the practice of presenting something from another culture (often music, fashion or art) as one’s own. But many of Megalis’ harshest critics at the forum said that the problem was that the way he depicted Rice’s shooting did not add anything useful to the conversation, but instead simply replicated the trauma. “I have a black son who looked like Tamir,” said activist Celeste Scott.

Felicity Williams, an attorney from Homestead, said the painting recalled the history of depicting black death for white voyeurs. “Some of you are here defending a modern-day lynching postcard,” she said.

In response to another question about whether there’s a correct way for artists to address this subject matter, Dowdy called out, “Paint Tamir when he was alive.”

The 90-minute forum turned increasingly contentious. When a number of attendees objected loudly to one speaker’s comments, moderator Luckett asked that exchanges be kept respectful. Scott, an organizer with Pittsburgh UNITED, retorted, “I’m not here to be respectable.”

Some attendees suggested that Luckett, who is African American, had been hired by the Cultural Trust to defend the painting. “Sister Kilolo does not deserve to be tokenized. And that’s what y’all did to her,” said Scott. (Luckett is in fact a critic of the painting, though at the forum she was largely neutral on the topic.)

Toward meeting’s end, some attendees expressed displeasure that anupama jain, a diversity and inclusion consultant who is Indian-American, had been quoted about inclusion issues in yesterday’s Pittsburgh Post-Gazette article about the controversy; some interpreted jain’s quote as her presumption to speak for the black community. Last night, when jain attempted to speak, she was shouted down. “Pass the mic to black women! Stop making money on our bodies!” said Scott.

When Luckett called to continue the conversation, Scott replied, “We don’t need to have a conversation. We already know what’s going on.”

After the forum ended, I asked Pittsburgh artist Julianne D’Errico what she took away. “What’s clear is that we need to talk and listen to each other. White people need to listen to black people. And we all need to be able to listen in a way that’s removed from ego and not be defensive when listening to other people’s pain, in a way [that lets us] move forward.”

“Change happens when you engage with people outside of your comfort zone,” said D’Errico, who is white. “It doesn’t happen behind a screen and it doesn’t happen inside your own mind.” In Megalis’ case, she said, “The artist was not consciously engaging with the community he was trying to talk about.”

On June 14, the Greater Pittsburgh Arts Council will hold its own long-planned panel discussion titled Cultural Appropriation and the Arts, at the Everyday Cafe, in Homewood. Panelists include educator and radio broadcaster Kevin Amos; fashion designer Tereneh Mosley; writer Brian Broome; and Anna-Lena Kempen. The event is free but registration is requested here.