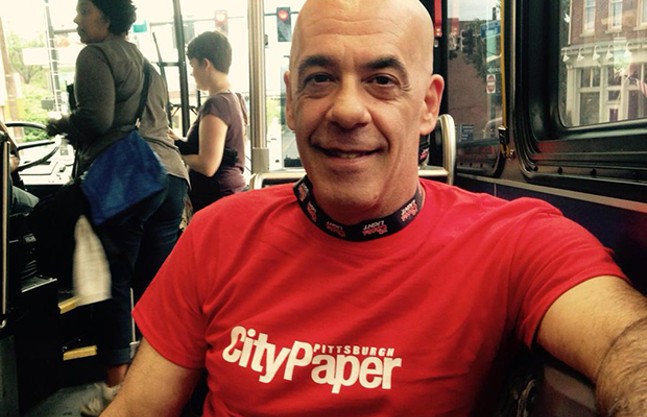 John Colombo on the bus Downtown to photograph Pride 2016

If you’re a regular reader of City Paper, chances are you’ll recognize John Colombo’s name. His photo bylines appear in the paper more often than any other photographer we work with. It’s because he’s really talented, of course, but it’s also because he’s an incredibly nice guy always willing to go the extra mile.

This week alone, you can see five of John’s photographs in our first-ever Pride Issue, including one of Sister Petra of Steel City Sisters, another of a local gay couple with their adopted children, and two from last year’s Pride parade. He’ll be at this year’s Pride festivities on Sunday too, joining City Paper and documenting the crowd as we march through Downtown together. (Give his camera some love and you might end up in our online photo essay next week!)

John has been professionally photographing Pittsburgh Pride events for City Paper and other publications for more than 15 years — and, even though he says it doesn’t define him, he also happens to be gay himself. In honor of this week’s Pride Issue, I talked to John about what it’s been like documenting Pride and being a part of Pittsburgh’s LGBTQ community for all those years.

Do you remember your first Pride?
My first Pride was in Pittsburgh, but the Pride fests of long ago were not very memorable. Just a lot of people hanging out. It was pretty somber, but good for whoever used to hold them. I think people just marched over a bridge to a park on the North Side. The largest Pride I ever attended was in Chicago. The parade ran over three hours. Had a camera with me then, too: a Sony that shot to floppy disk!

Do you think there’s an advantage to being a part of the LGBTQ community when covering gay events?
Yes and no. Yes, because a lot of people know me and are comfortable seeing me with a camera. However, I also may be overlooking things that may be of interest to the community at large because I’m used to being around the LGBT community.

How has Pride changed over the years?
It went from boring to overwhelming. [Laughs] Oh, and it’s so commercialized these days. I know the bills need to be paid, but one year Macy’s had a table at Pride. I found that odd.

You also do wedding photography. I know you’ve photographed some LGBTQ weddings since marriage equality came to Pennsylvania. Is that something you at one point thought would never happen?
No, not really. I’ve been single now for a billion years, so even though I care about others, I think we all tend to think of ourselves first. So being without a partner, I didn’t think much about marriage. But now that we have it, I think it’s wonderful and it was an exciting moment in history.

Have you noticed any differences between the straight weddings you’ve shot and the LGBTQ ones?
Nope. The only difference is that the gay weddings I have photographed have been more unconventional; more like a quick ceremony, then a super cool party. I shot one at the Carnegie Museums and another at the Carrie Furnace. Oh, and I even did one in the Mayor’s office.

You photographed Pittsburgh’s own reality TV star Sharon Needles for us a few years ago, and I know Sharon has hired you herself for some photography work. You knew her before she won RuPaul’s Drag Race. What was it like seeing someone you know from Pittsburgh’s scene make it big?
I was very happy for Sharon/Aaron. I’m always pleased to see people from Pittsburgh do big things. I remember the night Sharon won. I was at the Blue Moon, in Lawrenceville, with a bar full of people cheering. I was photographing that for another publication. They let me stand behind the bar to get my shot of everyone cheering.


Besides Sharon, what’s the best thing about Pittsburgh’s LGBTQ community that you wish people from out of town would get to experience?
Our down-to-earthness and our ability to move beyond the gay ghetto and go anywhere we like and not stand out. Pittsburghers seem to be very supportive and nonjudgmental in my experience.

Do you have any Pittsburgh LGBTQ role models?
I would have to say two people: Richard Parsakian [owner of Eons Fashion Antique and a member of Mayor Bill Peduto’s LGBTQIA+ Advisory Council] and Larry Leahy. Larry’s my dentist at Shadyside Dentistry and my friend. He’s a good person who would help anyone. When my dad died, I think he was the only person who sent me a card, and we’re not even that tight. But he thinks like that, and that’s a good quality. He just won the Kerry Stoner award this year, and Richard has won it in the past.

[Editor’s note: The Kerry Stoner Award is presented annually by the Pittsburgh AIDS Task Force to honor someone in memory of Kerry Stoner, a founder and the first executive director of PATF who passed away in 1993.]

How old were you when you realized you were gay?
Without realizing it, I think since I was in grade school. I knew for sure when I was 15.

Do you have a good coming-out story?
Nope, I’ve always blended well with all types of people, so I never really had a ‘come out’ moment. I guess just going to college may have been me coming out as I was away from family. I hung out with the theater crowd back then, so the straight people did most of the coming out. [Laughs]

This year’s Pittsburgh Pride theme is “Rise Up.” Pretend you got to pick the slogan. What would yours be called?
All You Need Is Love.

Rainbows or leather?
Leather. But fashionable leather, not like bondage.

Your choice for Pride headliner?
OK, this is as gay as I get, but I’m old-school so I’d have to say Cher or maybe Madonna.

For the first time ever, you have the night off as a photographer and can just dance the night away. Who’s your dream date to spend it with?
The Walking Dead’s Norman Reedus.

You can see more of John’s photography in this week’s Pittsburgh City Paper and on his website.