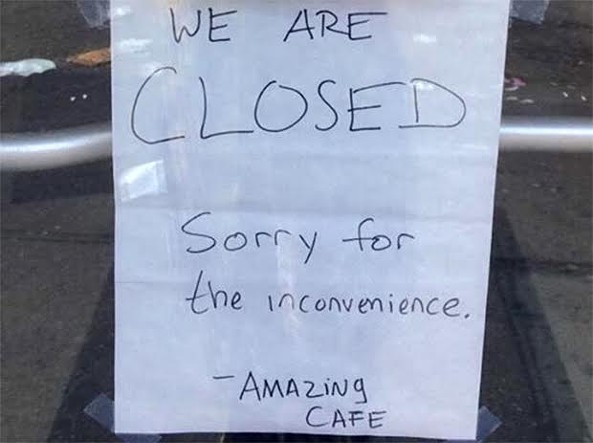 Photo courtesy of Restaurant Opportunities Center of Pittsburgh
Sign posted on South Side's Amazing Cafe
Up until May 20, Zachariah Reyes had worked seven days a week for two straight months, with the exception of holidays, at the Amazing Cafe in the South Side. He had been putting in extra hours to help the restaurant stay afloat after its head chef broke his arm and couldn't work. Even though he’s not officially a manager, he had taken on managerial duties like communicating with the owner in trying to replace faulty appliances. He hadn’t been given any perks or incentives for putting in the extra work. Reyes just felt he had too. He says this was true for many workers at Amazing Cafe, a vegan/vegetarian restaurant, which is attached to the Amazing Yoga studio on East Carson street.

But the next day, Sunday, May 21, Reyes and his co-workers had had enough. According to Reyes, after several weeks of the cafe being understaffed and management failing to deliver paychecks on time and to properly communicate with employees, the workers at Amazing Cafe staged a one-day strike in hopes of getting the owners to the negotiating table. They sent an email to the owners, Sean and Karen Conley, and posted a letter on the door on the night of May 20, explaining the reasoning behind their one-day strike and informing the owners that they would be back to work on May 22. The Conleys also own the adjoining Amazing Yoga studio in the South Side, as well as three other yoga studios in Allegheny County.

The letter read in part: “We are going on strike to address the rise in unfair working conditions and discrimination in restaurants across the country, including at Amazing Cafe. … We appreciate your efforts to create a fair work environment and ask for a meeting to discuss additional steps that can be taken to improve working conditions and protect workers who are the target of discrimination.”

Reyes says the strike was meant to put added pressure on the owners to meet with him and his co-workers to hash out workplace issues. “We decided to [strike] because no one would talk to us or try to come up with a solution to our work predicament,” says Reyes. “None of us are disgruntled workers. They just had to meet us face to face, we all just wanted to talk to them.”

However, Reyes says the owners responded that same day saying the restaurant would be closed indefinitely, and when Reyes and other co-workers arrived on May 22, the locks had been changed and were greeted by a sign that read, “We are closed. Sorry for the inconvenience, - Amazing Cafe.”

But on May 23, Sean Conley, who played four years in the National Football League as a kicker, sent a statement to City Paper saying Amazing Cafe would be closing down permanently due to the cafe not making enough money.

“We loved serving the community,” wrote Conley. “Despite what was reported to the City Paper by a former employee, we had great relationships with our staff. Unfortunately, the cafe has not performed well enough financially. The cafe is now closed permanently. We will miss being a part of the community and we would like to thank all of [the] customers that have been so supportive.” 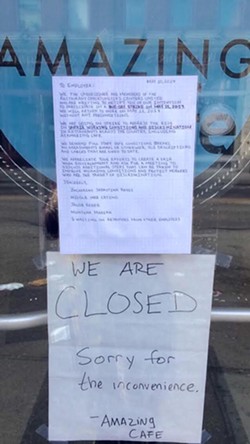 Photo courtesy of ROC Pittsburgh
Workers letter of intent to strike
Reyes doesn’t buy the financially motivated reasoning for why the owners decided to close down. He says “business was consistently picking up” since he started working there two years ago. Reyes says on a typical weekend day, the restaurant would pull in at least $2000, and weekdays averaged between $500-$700 in sales.

“It is not financial, they are doing this because of the strike,” says Reyes.

He adds that the owners are known to sponsor yoga instructors on “$10,000 trip to places like Cuba” to get them certified. The Conleys also own a house in Shadyside, which they purchased for $570,000 in 2007, according to Allegheny County property records. Furthermore, Reyes sent emails dated May 19 to CP showing the owners were actually planning to give workers some time off at the end of the month.

"Hopefully we can catch a breath and relax,” the email read.

“There are all sorts of texts they sent me that insinuate they wanted [the cafe] to keep going as long as possible, with no thoughts of closing,” says Reyes.

Jordan Romanus, of the Restaurant Opportunities Center of Pittsburgh, says the Conleys' original action of locking the workers out may be considered an unfair retaliation, and the subsequent closure only strengthens that case.

Amazing Cafe workers reached out to Romanus sometime last week, and he advised them on how to legally practice their right to strike. None of the cafe workers at Amazing are unionized, but the National Labor Relations Board Act allows organized and unorganized workers to strike as long as they give notice to their employers and announce when they plan to return to work.

According to the National Labor Relations Board Act, employers are allowed to lock out employees defensively if employers are “not motivated by a purpose to interfere with and defeat union activity.” Additionally, employers are barred from closing facilities if the motivation is to “chill unionism at any remaining facility and such an effect is reasonably foreseeable.”

Romanus says the workers delivered a “demand letter” to the owners at their Shadyside Amazing Yoga studio on May 23, and if they don’t comply within 48 hours, ROC Pittsburgh will help the workers file an unfair labor practice charge with the NLRB. Romanus says that while this is the first time ROC Pittsburgh has seen an employer just “shut down” when accused of wrongdoing, this is not surprising behavior for restaurant owners.

“It tells you what employers think of the workers in the restaurant industry,” says Romanus. “They view them as disposable.”

Reyes says he had hoped to discuss several issues of workplace treatment at Amazing Cafe, including proper staffing, lunch breaks, improved communication between staff and management, and pay equity.

“All the girls make substantially less than I do, but they do just as much if not more work,” says Reyes, who is 30 and has been working in the restaurant industry since he was a teenager.

Reyes says that six cafe workers will now be out of a job. He says he is not shocked this is how the Conleys reacted, since this is “how these people operate.” But he said he doesn’t have any hard feelings.

“I wish them the best,” says Reyes.

Opening yourself to chaos: Pharmakon performs at The Shop