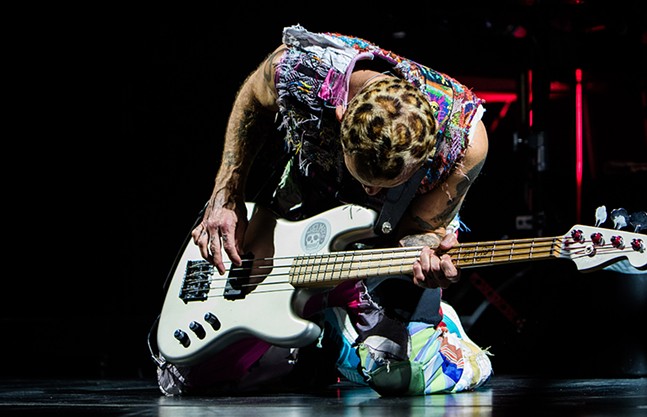 CP photo by Luke Thor Travis
Flea from Red Hot Chili Peppers performs at PPG Paints Arena.
Hordes of people of all shapes, sizes, eras and ages wearing the same asterisk t-shirt moseyed toward PPG Paints Arena like zombies powered solely by the desire to consume every ounce of funk and every drop of beer that they could get their hands on.

Hours before the doors opened at 8 p.m., bars lining Fifth Ave were blasting RHCP’s greatest hits, hoping to lure unsuspecting patrons inside by playing "Californication" and offering $3 drafts. No songs from The Getaway — the Red Hot Chili Pepper’s 11th studio album and the reason for this tour — were heard.

Inside, Jack Irons (founding member of RHCP and former drummer for Pearl Jam) and IRONTOM played a solid set before the main attraction, providing just enough rock to sustain the crowd while The Peppers warmed up backstage. At around 9:30 p.m., cheers erupted as Kiedis, Flea, Smith and Klinghoffer took the stage.

Flea began playing the famous bass riff from "Can’t Stop" and a second round of screams overcame the rock zombies. This is exactly what they signed up for; a heavy dose of nostalgia riding on a few hours of heavy guitar riffs while cute girls dance around in ripped jeans. 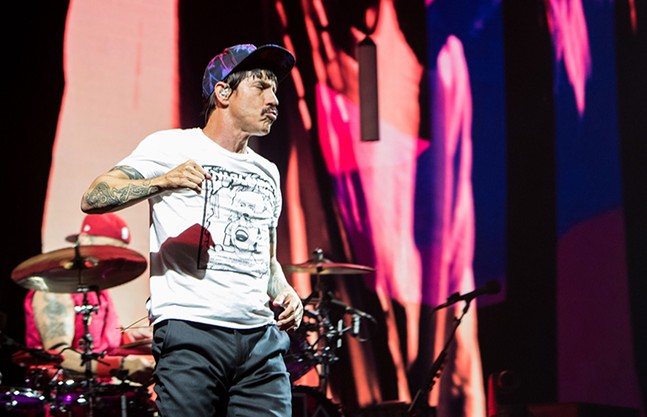 CP photo by Luke Thor Travis
Anthony Kiedis
Hundreds of cylindrical shaped lights that hung over the arena's floor seats moved up and down, glowing different colors depending on the song.The setup wasn’t particularly showy and neither was RHCP — the members hopped around onstage and played the occasional off-tempo riff, Kiedis tossing in an extra “UH” every so often. This appeased the rock zombies nevertheless, who screamed excessively for more.

Where are the socks? Where is the promiscuous male nudity? Needless to say, that was lacking. Is this a sign of the times? These questions went unanswered.

As "Californication" began playing, my friend and I decided to take a risk and surf through the sea of zombies to try and get closer to the stage. If the socks were going to make an appearance, I was going to bask in the tubular glory, front and center.

Everyone was extremely pleasant as we stole their seats, even smiling and dancing with us as we went along. When we got to the barrier separating the floor seats from the grandstand seats, a woman looked at my friend and I and decided to make a sacrifice.

“I’m going to show my boobs to the security guard and you guys make a run for it,” she said, as valiant as a soldier who knowingly volunteers for a losing battle.

She has to be remembered. Thank you, woman, whoever you are. Because of you, my friend and I were able to sneak onto the floor, even if it was just for a song or two before getting dragged out by security.

CP photo by Luke Thor Travis
Josh Klinghoffer and Chad Smith
We were forced to return to our normal seats and spend the remainder of the show there, dancing along to the funk with anyone who came near us. Most of the songs RHCP played flowed into one another, making it impossible to stop grooving along.

The Peppers dismissed themselves only to return for an encore which would appease the snobbiest of the rock gods. The night ended with "Give It Away," which seemed fitting, because it really felt like the Red Hot Chili Peppers laid it all out for their Pittsburgh fans.

As the lights turned on in the arena, drones of zombies slowly began departing as somber as they arrived. They will return to their homes satisfied, only to awaken in a few years, thirsting for the sound of funk rock after the next world tour is announced.