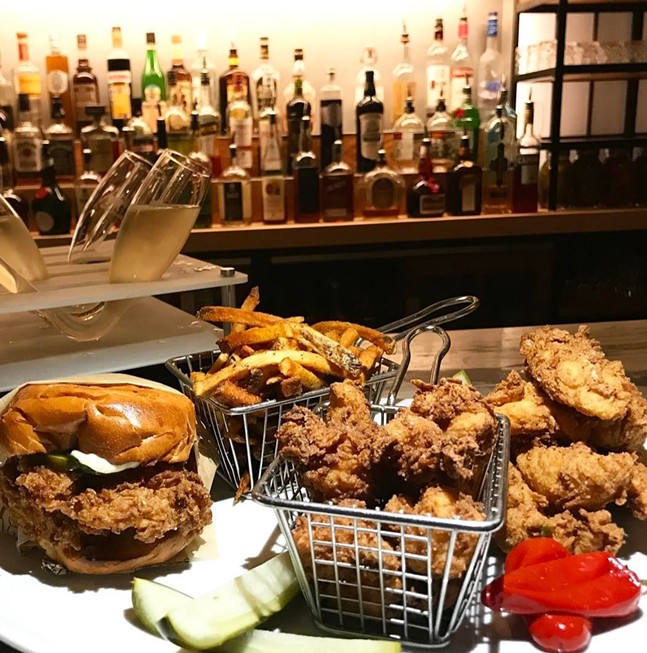 When Tara Coleman heard about a new "'90s hip-hop themed fried chicken" restaurant opening in East Liberty, she thought it was a joke.

"Once I saw it was in fact real, it was more insulting than anything else," says Coleman, a Bloomfield resident who works at a boutique in East Liberty. "It's insulting to me as a person of color. I don't understand why it's being marketed this way. It's rather stereotypical to pair fried chicken and hip hop."

An article announcing the new restaurant called "the Coop" appeared on the website Good Food Pittsburgh over the weekend. The project is being launched by the owners of Muddy Waters Oyster Bar in East Liberty. According to the article, the owners are also planning to open a Hawaiian poke themed restaurant called the Big Kahuna.

“This area is coming along so fast, even in just the past two years, so much as changed. We try to find the next thing that the city needs, and work to contribute it. We started with the oyster bar, and now we want to do a fried chicken spot, and a poke bowl restaurant,” owner Adam Kucenic said in the article.

But critics are saying the Coop is one thing the city doesn't need. Dozens posted comments on Good Food Pittsburgh's Facebook post linking to the article and several threads decrying the venture have been started on various social media sites. The new restaurant has been called everything on the spectrum, from racist to tone deaf, but many say it's an example of cultural appropriation.

"Most business owners would be willing to listen to their core customers when attention is brought upon problematic concepts, in this case, cultural appropriation," Liz Giap wrote in an email to Pittsburgh City Paper. "It's basically coming down to a white couple launching an 'urban' fried chicken spot in a mostly black neighborhood and it doesn't sit right with me.

"Fried chicken is delicious, I get it. But there doesn't need to be a stereotypical theme to the restaurant that only benefits the owners."

In an interview with CP, Muddy Waters owner Kucenic said he apologizes to those who were offended by how his new restaurant was described in the article. He also says the name will be changed from "the Coop" to "Lil' Chunky's Chicken Shack"

"It's all my fault; I 100 percent take the blame for the way I described the concept as 'urban street style'. I shouldn't have used those words," says Kucenic. "All we want to create is an affordable fast-casual restaurant in the neighborhood. We're not trying to appropriate black culture."

He also admits his company didn't handle the initial backlash correctly. In response to comments criticizing the restaurant on social media, Kucenic posted an article titled "The Liberal Fantasy of Cultural Appropriation." And Kucenic's partner Diana Strekalovskaya responded directly to one commenter in a Facebook message that concluded, "I'm sorry that you and your friend don't see it that way, but frankly, it doesn't really matter to us."
click to enlarge 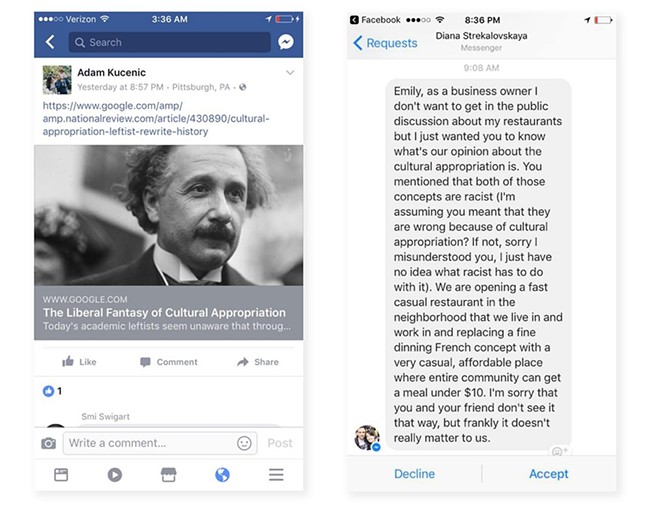 Screenshots of responses from Muddy Waters owners
"The basis of the article is that if cultural appropriation is wrong for one culture it should be wrong for all cultures," Kucenic told CP. "We shouldn't have posted it. That was another mistake on our part."

East Liberty has undergone somewhat of a demographic shift in recent years. In 2000, the black population there was 4,980 and the white population was 1,478. But by 2015, the black population dropped to 3,277 and the white population rose to 1,755. Critics say these population changes are a sign of gentrification, a term that describes the arrival of wealthier people into an urban neighborhood and the subsequent increase in rents and property values that contribute to changes in the neighborhood's character and culture. In these situations, African-American residents are often displaced.

"Traditionally [East Liberty] has been an urban community, largely populated with African-Americans. [The owner] has to know about the displacement and everything that's going on politically in this area," Coleman says. "People have had to move out of this community and for him to create something that traditionally is geared toward African-Americans feels like pandering. So you wait until the Black folks are forced to leave their community and then you create something like this. I feel like it was created for white people who want to congregate in urban spaces without actually having to deal with urban people."

"Our vision was that this would be an affordable place where nothing on the menu would be over $10," Kucenic says. "Living here I see everyday people walking down the street of all cultures. Obviously there's gentrification that's going on. We know that; we see what's going on. We're not trying to exploit anyone. We're just trying to make a place that we thought would be for everyone in the community. Now that we see it's offensive we need to switch gears. We want everyone to feel welcome there and for it to be welcome to the whole community."