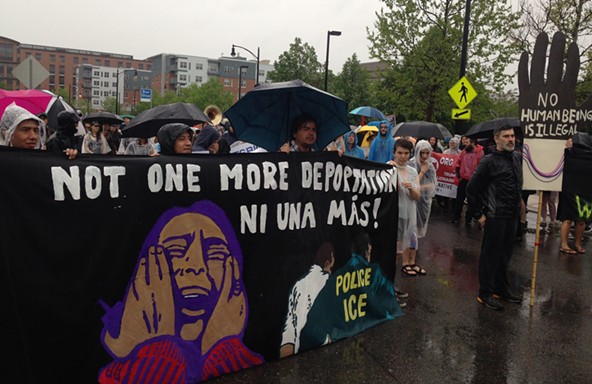 CP photo by Ryan Deto
Immigrant-rights protesters in front of the ICE office in the South Side
On May 1, 2016, about 100 marchers took to the streets of Beechview to support immigrant rights. One of those marchers was Martín Esquivel-Hernandez, an undocumented Mexican immigrant who was detained by U.S. Immigration and Customs Enforcement (ICE) agents the next day and has since been deported , even though he had no local criminal record; he received public support from politicians, activists and religious leaders.

One year later, immigrant-rights groups took to the streets again and their numbers more than tripled, with more than 300 protesters in the South Side in the pouring rain. The group even video-chatted with Esquivel-Hernandez from Mexico and he told the group to keep fighting for immigrant protections in Pittsburgh.

“I want to encourage people of all races and nationalities to unite in this fight,” said Christina Castillo of the Thomas Merton Center at the May 1 rally, reading a statement from Esquivel-Hernandez. “We are all from Pittsburgh, we all call this place home, we all have family and love connected to this city, and we need to start fighting united as if we were all a family.”

In joining with that fight, Guillermo Perez, of Pittsburgh’s chapter of the Labor Council for Latin American Advancement, is calling for Pittsburgh and Allegheny County to become “Freedom” municipalities, as defined by the American Civil Liberties Union. Freedom polices include nine rules, most of which demand that ICE be barred from city and county facilities without a judicial warrant or pursuant to a court order, and that local police not ask about immigration status or voluntarily release immigration information to ICE.

Because Pittsburgh already complies with many of the Freedom policies, Perez says more pressure must be put on Allegheny County executive Rich Fitzgerald, so the county and the city can achieve Freedom status.

In a statement sent to City Paper in January, Allegheny County Jail warden Orlando Harper said ICE officials can check inmates’ immigration status through a database, and that “[ICE] staff come into the facility several times a week to review [an] inmate’s immigration status.” Fitzgerald, as the county's top elected official, controls how the Allegheny County Jail is operated.

Perez says Pittsburgh and other municipalities can’t fully protect immigrants without policy changes at the county jail. “The Allegheny County Jail does not need to share information without a judicial warrant,” says Perez. “Whatever policies that we get from the city, they are not going to help if the county doesn’t also comply.”

Perez says that if undocumented immigrants and their documented relatives fear that authorities could easily learn their immigration status, they will be less likely to report crimes. He cites recent stories showing that domestic violence cases have seen decreased reporting because immigrants are fearful of being deported.

On April 30, Perez, along with other immigrant-rights and religious groups, sent Fitzgerald a letter requesting that the county jail stop sharing information with ICE without a judicial warrant or court order. The letter, which Perez shared with CP, also asks Fitzgerald to call on state legislators to oppose anti-immigrant legislation and to publicly encourage county municipalities to adopt policies “protecting the civil rights of all immigrants.”

County spokesperson Amie Downs wrote in an email to CP that Fitzgerald's office has "not received any letter from the advocates and so commenting on its contents and response would be premature." She added that county officials will "certainly review it when received to determine if any of the requests of the county are items that we could do."

In a September 2016 interview with CP, Fitzgerald said that he doesn’t have the authority to alter municipalities' immigration-policing policies.

“I don't have the authority to go to the Mount Lebanon police, to tell them we don’t [want them communicating with ICE] in Allegheny County,” said Fitzgerald. “They could agree, but they don’t have to listen to what any county executive says. … We want to be a welcoming area, but we can’t mandate that everybody be as welcoming as we want them to be.”

However, Fitzgerald said that attracting immigrants to Allegheny County is high on his priorities.

“One of things we are doing, we are proactively reaching out to immigrants,” said Fitzgerald. “We want more immigration in this region. Some of it because it is the right thing to do, but some of it because economically, we need it. We are going to have so many people retiring over the course of next eight or nine years … we are going to 8,000 people short [to fill those jobs].”