Pittsburgh City Councilor Darlene Harris (D-North Side) is running for mayor, but her campaign hasn’t produced many detailed plans on how she plans to improve the city. Instead, she’s provided a critical, almost-laser-like focus on one issue: bike lanes.

Harris recently rated Pittsburgh Mayor Bill Peduto’s mayorship as a “D-minus,” telling WTAE on April 18 because Peduto “put all these bike lanes in.” And, for her closing statement of an April 19 mayoral debate, she said, even though bike lanes weren’t brought up during the debate, “We did not talk about bike lanes at all this evening, and I wonder why? We have nothing with bike lanes, no safety attached to it, no studies, nothing. And someone is going to get seriously hurt. … Public safety is very important to me.”

However, one local cyclist is questioning how much Harris cares about public safety after he was involved in a verbal altercation with the city councilor last year after she apparently instigated an incident at a red light.

On May 4, 2016, North Hills resident Stuart Strickland was riding his bicycle on East Street in the North Side, while wearing a camera attached to his chest. At the 2:01 mark (shown above), a horn is heard. Strickland said in an interview with CP on April 20, that the horn came from a gold Jeep directly behind him. The driver of the Jeep and Strickland shouted at each other at the next stop sign after crossing a bridge that spans I-279. As East Street widened into three lanes lanes, the Jeep sped past Strickland. Strickland, however, caught up to the Jeep at the traffic signal at Tripoli and East streets and asked the driver, who Strickland has since identified as Harris, “What’s your problem?”

“Stay in the damn bike lanes!” shouted the female voice in the video. “What the hell do you think we put them there for?” Then as the female driver sped off, she shouted something that is partially audible that sounds like ‘“idiot;” Strickland told CP later that she “definitely said ‘idiot.’”

When the confrontation first started with the horn honk on the east side of East Street, there were no bike lanes for Strickland to ride in, nor are there any alternative routes with bike lanes that come from the North Hills into Downtown or the North Side. Additionally, a speedometer on Strickland's bike shows he was traveling 23 miles per hour when the honk occurred, which is actually well over the 15 mph speed limit that is posted on that section of East Street before the bridge.

“She comes flying up behind me and lays on her horn,” said Strickland. “This is a one-lane road, and just a guard rail right next to it. … Coming up behind a cyclist and blaring on the horn is not safe.”

Strickland said when he first got in the argument with the Jeep driver, he didn’t know who the driver was, but later he realized it was Harris. Strickland said he had seen her at public meetings since the confrontation and even spoke to the city councilor at city planning meeting for new bike lanes in the North Side in 2016. The confrontation occurred less than a mile from Harris' home.

On April 21, CP  saw a gold Jeep outside Harris’ North Side home that has the same license plate number that Strickland repeatedly mentions in the video. The gold Jeep also had a city of Pittsburgh non-restrictive parking pass in front window, which all city councilors receive. 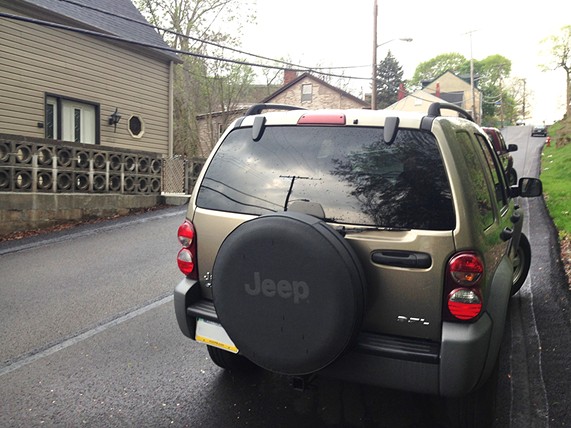 CP photo by Ryan Deto
What appears to Darlene Harris' vehicle, which matches Jeep in video, out front of her North Side home.
This kind of harassment that Harris allegedly directed at Strickland is pretty typical for cyclists to experience, says Strickland, who often bikes into Pittsburgh from his home in the North Hills.

“Anytime I get a horn from someone coming up behind me, it's always intended as a ‘get out of my way, you idiot’ message,” says Strickland. “You wouldn't blow your horn at a [tractor], which goes the speed of a bike, so why do it to a cyclist?”

He says he has been honked at before and even been forced to exit the road a few times due to aggressive drivers. Strickland says this is frustrating since Pennsylvania law grants the same rights to cyclists on public roads as it does to drivers. The Pennsylvania Motor Vehicle Code states bicycles are considered "vehicles and provides that every person riding a [bicycle] upon a roadway shall be granted all of the rights and responsibilities applicable to a driver of a vehicle."

“There is general ignorance among drivers,” says Strickland. “They don't know what the rules are, and they are impatient. They want to drive 10 miles over the speed limit, and cyclists don’t always go that fast. A lot of people have not ever been trained in what the rules are. We learn how to pilot a car, but not all the rules. And they certainly don't know the bike rules.”

Strickland says he understands many people don’t always know cyclists’ legal rights to the road, and is forgiving since drivers aren’t tested often about them. But for a person in Harris’s position, he expects more.

“She should know better,” said Strickland. “I don’t think that she knows the law as good as she should, given the position she is in.”

Mason Palissery, of Harris' office, said Harris was unable to be reached for comment by press time since she is attending a funeral. CP will add a statement from Harris, if and when, she provides one.

Darlene Harris
Despite all of Harris' criticism of bike lanes, her campaign has failed to provide any substantial evidence that bike lanes have negatively impacted the city or its residents. Her assertion during the April 19 debate that no bike-lane studies are available also runs counter to the existence of dozens of bike-lane studies, surveys and data compilations, many of which are specifically about Pittsburgh.

Eric Boerer, of bike advocacy group Bike Pittsburgh, has grown frustrated by bike-lane attacks from mayoral candidates like Harris. He emailed CP, writing that Harris “hasn't been totally against bike lanes, just very critical and totally unhelpful” in their implementation in her district.

“Bike lanes are a minuscule part of the overall budget and provide residents with an affordable way to get around,” wrote Boerer in an email to CP. “It's not clear why any mayoral candidate would be against a safe, healthy and cheap transportation solution. Playing politics with the safety of our residents is disingenuous at best, and dangerous at worst, and shows a complete lack of understanding of how a city's streets ought to function in the 21st century.”