CP photo by Ryan Deto
More than 200 consituents fill the Bethel Park Community Center at a town hall event without Rep. Tim Murphy.
Ever since the inauguration of President Donald Trump, U.S. Congressman Tim Murphy (R-Upper St. Clair) has been hearing it from many of his constituents. Groups like Mondays With Murphy and 412 Resistance have formed, both with the goal of meeting with Murphy and sharing their views, many of which run counter to what the Republican lawmaker supports.

For weeks, constituents have flooded his office with calls and protested outside his Greensburg and Mount Lebanon offices. A group of six constituents even tried to speak to him at a talk he held at Duquesne University, but Murphy cancelled that event at the last second to dodge their questions.

Murphy, like many Republican legislators, including U.S. Sen. Pat Toomey, has failed to hold a public town hall since Trump was elected. In response, more than 200 of Murphy’s constituents met in Bethel Park to hold a town hall without him. Valerie Fleisher, of 412 Resistance, said she filled out an official request form on Murphy’s website on March 27, requesting a town hall with her representative. Fleisher said that hundreds of others repeated this process, but said that Murphy refused to even respond to the request.

So the group went ahead with the town hall anyway, choosing to fill his space with health-care experts and a representative from Planned Parenthood. “Since Congressman Murphy, chose to not be here tonight, we will have to make do with our speakers,” Fleisher told the crowd in the Bethel Park Community Center.

Ed Chute, of Mount Lebanon, spoke in front of the crowd and said that he has rarely seen or heard Murphy express his opinion directly to his constituents. Chute asked Murphy: “Do you believe health care is a human right?”

The two-hour event was focused mostly on health-care issues and had dozens of participants asking questions about Murphy’s stances on many issues related to the Affordable Care Act. Lynne Hughes, of Mount Lebanon, asked if Murphy supported keeping the preexisting-conditions provision of the ACA, which Republican lawmakers proposed removing when they failed to pass their ACA replacement, the American Health Care Act.

Megan McGee, from Marianna in Washington County, a U.S. veteran who described herself as a progressive, wondered if her stances, which often differ from Murphy’s, would be heard by the
congressman. 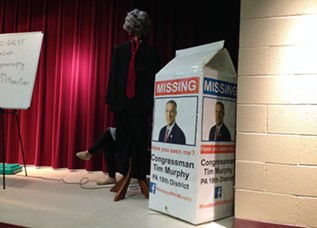 CP photo by Ryan Deto
An empty suit and giant milk carton served as replacements to Congressman Tim Murphy
“Why doesn’t my voice matter?” asked McGee. “I am still a constituent.”

Fleisher said in an interview with Pittsburgh City Paper after the event that Murphy’s continued reluctance to meet with his constituents has motivated her group and others to find a candidate to run against Murphy. She said 412 Resistance has a 2018 midterm election committee and they are “laying the groundwork” to build up a Democratic candidate for Pennsylvania’s 18th Congressional District.

“It’s vital to find a replacement,” said Fleisher. “It’s completely ridiculous he has been unopposed for years. It’s not what democracy looks like.”

A request for comment from Tim Murphy’s office went unanswered by press time.

But the 200 inside the community center who were critical of Murphy weren’t the only constituents present. About a dozen Murphy supporters stood outside the center with signs saying “We support Tim Murphy,” along with some pro-life posters. Jeannie French, a constituent from Upper St. Clair who described herself as a pro-life Democrat, said she wanted to come out to show she stands with Murphy on his pro-life stances. “I do believe he is genuine in his support of health care,” said French.

However, even French, who said abortion was her biggest voting issue, admitted she would prefer to see a pro-life Democrat run for Murphy’s seat and said Murphy “is all we got right now.”