Joyce Carol Oates arrived in Pittsburgh on a red-eye flight on Tuesday morning and said that walking around Mount Lebanon felt kind of surreal, as the morning after an overnight flight often does. But the cross-country travel didn’t slow the acclaimed author down last night, as she kept a full auditorium at Mount Lebanon's Mellon Middle School in thrall discussing her latest novel, A Book of American Martyrs. 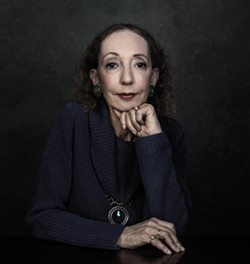 Joyce Carol Oates
The novel, set in Michigan and Ohio, is told in the voices of myriad characters. Primarily it is the story of two families: those of Dr. Augustus Voorhees, an abortion doctor who is murdered in the novel's first sentence, and Luther Dunphy, the Christian-fundamentalist assassin. Both men end up martyrs to their respective causes.

The first excerpt Oates read was from the perspective of Voorhees. Interestingly, it was a passage she edited out, explaining that it felt like a stand-alone piece, or a short story. Oates has taught creative writing since the early 1960s and she clearly brings her professorial self to bear when editing her own work.

She read two other excerpts (both actually in the book): one from the perspective of Dunphy, living on death row and grappling with his own imminent death, the other a very moving inner dialogue from the perspective of a corrections officer whose job it is to administer the lethal injection. Oates talked about visiting San Quentin Maximum Security Prison, which houses all of the California's death-row prisoners, and trying to describe that execution chamber exactly for this book, right down to the incongruous robin’s-egg blue walls.

Discussion of American Martyrs segued into talk of the current political climate. “Since the 2016 election, the two Americas have been at war, and the rift in our society is ever more obvious since the election of Donald Trump," Oates said. "The division is painful and it’s hard to see a way out of it.” And though she wrote American Martyrs prior to the 2016 election, the book reflects this deep fracture.

Early in the talk, Oates quoted Stendhal ("Fiction is a mirror carried along a high road"), and referred back to the quote frequently.

She noted that the abortion doctor comes from “a world of her own” — one of financially secure people, most with advanced degrees and education. And that the other side, often fundamentalist, quite socially conservative, is often spoken of in pejorative terms by her own cohort. She had to work hard to put herself in the place of those characters, for her to make them feel less "other," to hold up Stendhal’s mirror. But she grew to have great sympathy for them and for Luther Dunphy, in particular.

Oates' work is serious, sometimes grim, often difficult. But she’s lighter and funnier than one might expect from reading her curriculum vitae. She talked about the sense of hope in her work, that she’s always looking for “affirmations of the resilience of the human spirit … things that are affirming and healing.”

She responded to a question about the often merciless nature of her work by saying that her writing was not, in and of itself, depressing. “It would be painful if everybody died, if there was a big sinkhole. That would be depressing, I think.”

It seemed like the right note on which to end the night.

Oates spoke as part of the Mount Lebanon Library Public Speakers Series. To read an interview with Oates from last week's edition of CP, see here.

Author of "Guns, Germs and Steel" and "Collapse" speaks tomorrow in Downtown Pittsburgh