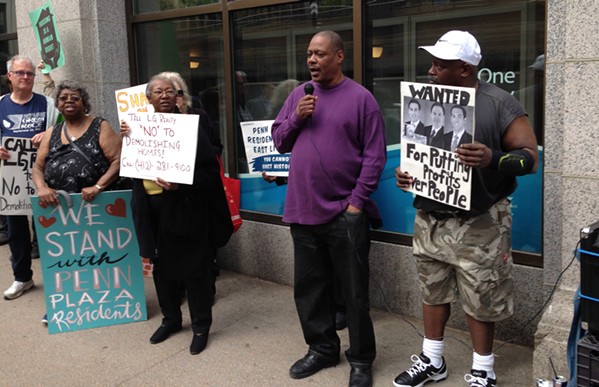 CP photo by Ryan Deto
Affordable-housing advocates rally on Smithfield Street in Downtown, Pittsburgh.
In June 2015, when LG Realty Advisors placed 90-day eviction notices on the doors of the 312 units that made up Penn Plaza apartments in East Liberty, many believed this was just another instance of low-income renters being pushed out of their neighborhood because redevelopment was coming.

Instead, Pittsburgh Mayor Bill Peduto met with Penn Plaza residents, and more than 100 of them formed a tenant council to advocate for their rights. Soon after, a deal was reached that got move-out costs for the tenants and affordable-housing commitments from the city, in turn for allowing the developers, LG, to move forward with their plans.

But things started to go south for the developers after that. A fight over the public park next to Penn Plaza went in favor of the public, and the Pittsburgh Planning Commission voted 9-0 against the developers' plans because they said LG failed to collaborate with the community. Also, the major business tenant of the proposed Penn Plaza redevelopment, Whole Foods Market, pulled out.

Now, the affordable-housing advocates who have been rallying around the Penn Plaza saga, Homes For All Pittsburgh, want the city of Pittsburgh to purchase the remaining Penn Plaza building to preserve it as affordable housing and allow the tenants to own the building, like a co-op. The building, 5600 Penn Ave., is set to be demolished soon (the other building 5704 Penn Ave. was demolished in 2016).

Today, about 20 people held a rally on Smithfield Street, Downtown, demanding that Penn Plaza be sold to the city.

Pittsburgh, through the Pittsburgh Housing Authority, actually tried to purchase Penn Plaza back in 2015, but LG declined. Helen Gerhardt, of Homes for All, believes it is time to reconsider that plan.

"The city has an obligation to provide fair and affordable housing," says Gerhardt. "We want someone to own Penn Plaza who has that obligation."

Gerhardt says that in addition to providing affordable rents for low-income residents, tenant-owned buildings can have positive effects on residents, as they tend to provide some onsite jobs and social services that can help lift residents out of poverty. She cites success on the North Side, where the Northside Coalition for Fair Housing was able to purchase scattered sites and keep them affordable and tenant-owned. Gerhardt says Homes For All will continue to call out LG until it sells the building to the city.

Gerhardt also added she is grateful that the city and Pittsburgh City Council have taken steps to address affordable-housing issues, but says substantial affordable-housing legislation must come soon. She says she has spoken with developers who are on board with inclusionary zoning requirements, where developers set aside a certain percentage of units that maintain affordability. City council is currently considering creating a Housing Opportunity Fund, which would provide $10 million a year to pay for affordable-housing projects and provide more leverage for state and federal housing grants.

Gerhardt says more and more low-income Pittsburghers are being pushed out of their neighborhoods due to rising rents and its "absolutely" time for council to act on these proposals.