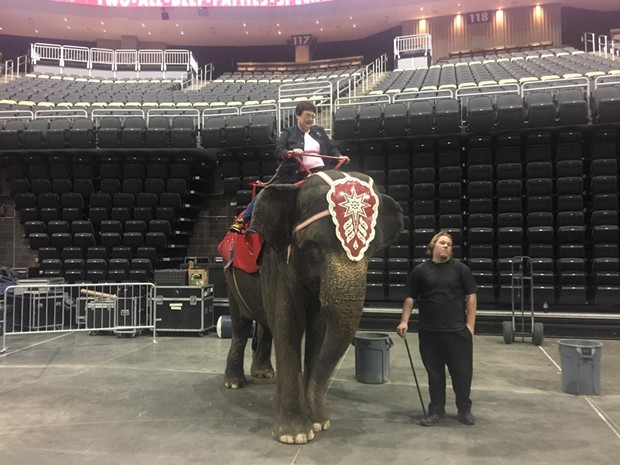 "The cruelty that elephants like this have suffered for decades is unconscionable and one by one, either the tools of the cruelty - bullhooks - or the very source of the cruelty - using wild animals like elephants in circuses - is being outlawed throughout the US," wrote Lori Sirianni on Harris' Facebook page.

And now national animal-rights group People for the Ethical Treatment of Animals is weighing in. Yesterday, PETA sent a letter to Harris about the abuses circus animals experience.

"The circus's deplorable history of hurting and exploiting animals is all in the public record," Rachel Mathews, PETA Foundation associate director of captive-animal law enforcement, said in a statement. "If Darlene Harris is the animal advocate she claims to be, she should support efforts underway in Pittsburgh to ban cruel animal acts — not condone cruelty by riding an elephant."

Harris has been an animal advocate in the past. In 2015, she sponsored legislation, which passed, prohibiting the capture and harm of wild birds; and she's successfully advocated other legislation to help protect animals over the years.

But Harris opposed legislation sponsored by City Councilor Bruce Kraus last year to prohibit performances by wild or exotic animals for public entertainment or amusement. A vote on the ordinance has never taken place. In 2015, Kraus had sponsored legislation making it illegal to use bullhooks or similar devices on elephants, but it was later withdrawn.

Read the full letter PETA sent to Harris below.

I'm writing on behalf of PETA and our more than 6.5 million members and supporters worldwide, including thousands in Pittsburgh, in response to your request for proof of abuse at the Shrine circus. Our files are bursting with reports of cruelty, animal-welfare violations, and other problems. I hope that after learning the facts, you will reconsider your support of circuses that force animals to perform and apologize for promoting the cruelty inherent in using animals for entertainment.

Traci, the elephant you rode recently, was leased from Carson & Barnes Circus, a notorious animal abuser with repeated violations of the federal Animal Welfare Act (AWA). Its laundry list of offenses includes failing to provide animals with minimum space and clean water and failing to identify, convey, or document treatment of veterinary care for several animals, including an elephant who has since died.

You may not realize that elephants do not give rides willingly. They must be violently "broken" first. Tim Frisco, Carson & Barnes' animal-care director, was videotaped viciously attacking elephants with heavy steel-tipped bullhooks and electric prods and instructing trainers to sink the bullhooks into the animals' flesh and twist them until the elephants scream in pain.

Carson & Barnes also has an alarming record of endangering the public. Last year, it was ordered to pay a $16,000 fine to settle an AWA lawsuit after three elephants became frightened, escaped from a performance, and ran amok for nearly an hour. In 2011, a federal inspector saw a circus employee exchanging money with a coworker while the elephant he was supposed to be controlling walked away with passengers in the saddle.

As you know, last year, City Council President Bruce A. Kraus introduced legislation to ban animals from being bred, caged, trained, and transported for entertainment in Pittsburgh. We urge you to consider supporting this legislation, which would spare animals so much suffering.