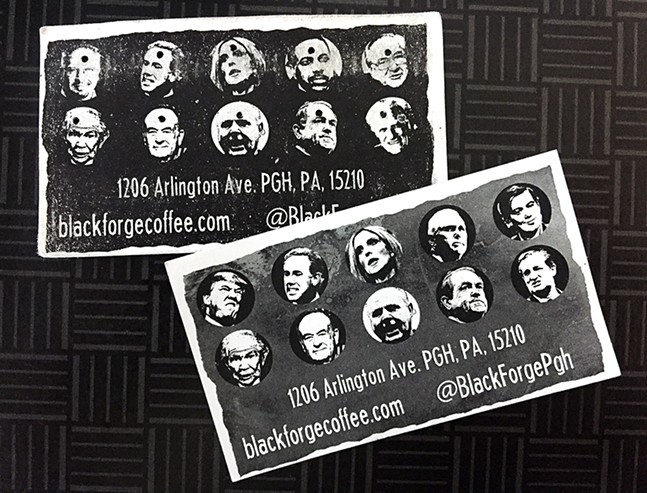 CP photo by Lisa Cunningham
The top punch card was the first given out at Black Forge Coffee. The bottom card was launched last week.

It's easy to draw conclusions from the imagery on the punch cards. Due to the size of the hole-punch used, each coffee purchase equals a hole that resembles a bullet hole through the head.

But despite that bold statement, little fanfare surrounded these loyalty cards until last week, when Black Forge changed the lineup. In addition to the faces of Coulter and Santorum, customers were also greeted by President Donald Trump and former presidential candidate Sen. Ted Cruz (R-Texas). Cue the backlash.

Last Friday, WPXI aired a story on the punch cards, headlined "Coffee shop rewards card brewing up controversy" and highlighting some of the negative feedback the new cards were receiving on Facebook. The story was picked up by other news outlets, causing a snowball effect that sent people to Black Forge’s Facebook page in droves.

In the week since the shop, owned by Ashley Corts and Nick Miller, announced the new card on its Facebook page, the post has garnered more than 350 comments, and the number of reviews on the page has increased more than tenfold, to nearly 3,000. So far, despite the uproar, business has remained steady. But the owners have received threats both online and over the phone.

"We support our First Amendment right to free speech. We're not advocating violence," Corts told Pittsburgh City Paper at the coffee shop this week. "It's meant to be a political satire, but we really didn't think it would start a controversy."

The latest round of punch cards was printed on March 23, and by March 28, all 300 had been dished out. Before the backlash, Black Forge boasted a perfect five-star rating on Facebook. Now its rating has fallen to 3.7.

Traffic on the Facebook page has increased drastically. Many commenters say Black Forge's punch cards are a direct threat to Trump's life. (A Florida gun-supply store drew similar ire last year when it sold shooting targets with then-President Barack Obama's face on them. They also sold targets bearing the likenesses of presidential candidates Hillary Clinton and Bernie Sanders.) Others criticize what they see as Black Forge's liberal views. (Corts maintains the shop is nonpartisan.)

CP has spent hours poring over the reviews and comments on the page, but even a cursory glance reveals that most of the negative comments and reviews there are from out-of-town posters. While some of these posters at least attempt to paint a picture of a customer who has entered Black Forge and sampled the coffee, others don't even try to veil their purpose.

"Black Forge owners spread hate and disrespect for our country and its leaders. You should be ashamed of yourselves," Candice McNeely, of San Antonio, Texas, wrote yesterday.

McNeely’s is one of the more polite posts. Coffee lends itself to fecal comparisons, and plenty of commenters have taken the bait. But those comments are tame in comparison to others, like Daniel Smith from Friscoe, Texas, who claims, “There was fetus in my scone.”

"All we can do is sit back and laugh at the people who are saying nonsense, but it's their right," says Corts. "You're welcome to exercise your right not to come in here, but we won't turn anyone away.

"The worst part is the phone calls. They've threatened to burn our building down."

"We're all on this earth together. We don't have to get along, but don't slander people you don't agree with," Corts says. "When people say 'You pee in your coffee,' that's funny because it's not true. They've never been here. But when you go out of your way to say something like that, it hurts." 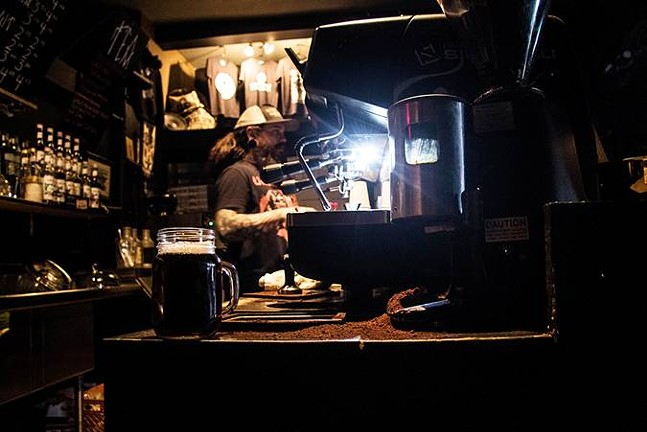 CP photo by Luke Thor Travis
Behind the counter at Black Forge
Fortunately, the response hasn’t been all bad. Members of the Allentown community have offered support to Black Forge. A campaign was started to get actual Black Forge patrons to rate the place on Facebook and asks others to visit. Right now the number of five-star reviews on the page is double the number of one-star reviews. (Admittedly, some of the five-star reviews appear to be from out of town posters, too, but many are from Pittsburghers.)

Sales have been positively impacted as well. Black Forge usually does about $300 in sales in a day, but last Saturday, when the backlash and counter-campaign first picked up, it brought in more than $800.

"The support we've received from this has been amazing," Corts says. "People have been great."

And Corts believes that, regardless of political views, the Allentown and Greater Pittsburgh community know what the coffee shop stands for. The shop holds all-ages shows and performances and, above all, Corts says, it's an advocate for free speech.

Even before Black Forge opened its doors, it served as a meeting place for a neighborhood church group. And the owners continue to support veterans groups, Children's Hospital of Pittsburgh and Planned Parenthood with donations. When there's a community event in Allentown, they’ve provided coffee.

Around the time of last year's election, Corts says, an elderly man who is one of the shop's regulars walked in wearing a "Make America Great Again" T-shirt and asked if he was still welcome. She didn't hesitate before saying yes.

"We welcome everyone through these doors. We're not partisan," Corts says. "The only thing we truly stand for is equality, truth and justice."