CP photo by Bill O'Driscoll
Steve O'Hearn operates his Donald Trump puppet
Today's rainy installment of this weekly Downtown protest at the office of U.S. Sen. Pat Toomey was marked by the debut of a larger-than-life Donald Trump puppet created and operated as a side project by members of performance troupe Squonk Opera.

The puckishly named No You're The Puppet Theater found a gray-suited "Trump" (complete with flag lapel pin), perched on the shoulders of Steve O'Hearn, joining about 125 protesters at Firstside Park and then marching to the Grant Building, which houses Toomey's office.

A brief skit had someone calling Trump a puppet, and Trump (voiced by O'Hearn) bellowing back, "No, you're the puppet" — reprising an infamous exchange from Trump's final presidential debate with Hillary Clinton last year. O'Hearn operated the puppet partly by pulling on its overly long maroon necktie. In a sloppy gray wig and black-rimmed eyeglasses, O'Hearn himself looked remarkably like presidential adviser Steve Bannon. 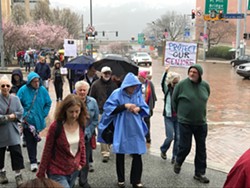 CP photo by Bill O'Driscoll
Tuesdays With Toomey marchers today
No You're the Puppet is distinct from Squonk Opera, the long-running, nationally touring Pittsburgh-based art-rock band and performance troupe whose work has long featured giant puppets and other outrageous props. O'Hearn and fellow Squonkers Jackie Dempsey and David Wallace have (again, as individuals, not troupe members) been regulars at Tuesdays With Toomey, designed to call out the senator's inaccessibility to the public and close allegiance to Trump's policies. Letters addressed to the senator were also delivered to his offices.

Tuesdays With Toomey have run weekly since January in Pittsburgh, Philadelphia and other Pennsylvania towns, with protesters often turning up in the hundreds to demand that the senator meet with constituents, which he has so far refused to do (aside from a couple hastily called tele-town halls). Participants expressed concern about a range of issues, including health care: "No to Block Grant for Medicaid" and "Don't Compromise Seniors," read two signs.

On the sidewalk outside the Grant Building entrance, protesters chanted "Town hall! Town hall!" and cheered the defeat of the Republican-proposed health-care plan that failed to reach a vote in Congress last week.

Tuesdays with Toomey happens at noon every Tuesday.

Tags: Tuesdays With Toomey , Squonk Opera , No , You're the Puppet Theater , Trump , Image

Music To Sweep To 13: Fela Kuti 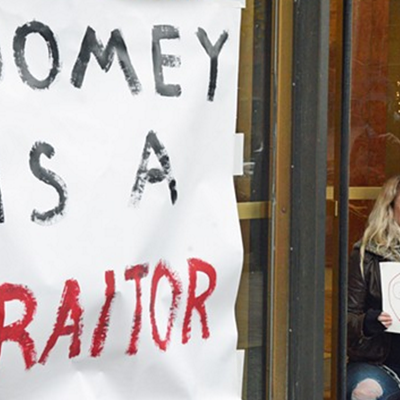